A rockstar gets a second chance with the girl he's never forgotten in this romance of a fake relationship that soon becomes oh so much more.  Keep reading to get a tempting taste of Just One Spark by Carly Phillips, along with my impressions of this fourth installment in The Kingston Family series, then add it to your bookshelf! 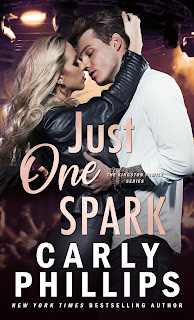 He’s a playboy rock star living the rock and roll dream...
Until a very real baby scare threatens to bring it all crashing down.Dash Kingston has learned his lesson and knows his hard-partying lifestyle needs to change. To clean up his playboy image, he needs a fake girlfriend.There’s just one problem: the perfect woman for the job is a gorgeous blonde who once aroused not just his body but his emotions, sending him running. And leaving her to wake up alone.For the band’s sake, Cassidy Forrester agrees to play the girlfriend role, but she’s not going to fall for Dash’s charm or sex appeal ever again.Except this Dash Kingston swears he’s a changed man, and he’s out to win Cassidy over - for good. But only a fool would make the same mistake twice, and Cassidy refuses to let their spark burn her a second time. 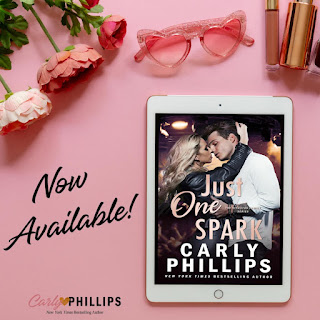 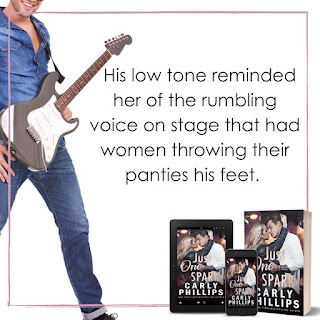 MY IMPRESSIONS OF THIS BOOK:
As a fan of rockstar romances I was immediately drawn to this story and quickly became invested in the second chance this playboy rocker has been given.  Though the storyline is familiar, the issues between these former lovers having been dealt with before, this was still an enticing read.  From the first page to the last this was a charming tale, a satisfying story of making amends to forge a new beginning, and is another example of how talented Ms. Phillips is in creating quick reads full of heart and soul.
Dash Kingston's the proverbial playboy rockstar, flitting from one woman to the next.  When his most recent encounter leads to hard truths he decides it's time to change...and admit what's been weighing on him for years.  Leaving Cassidy Forrester behind was the biggest mistake of his life, no other woman has ever been able to compare.  With so many scandals his PR people think he needs to change too and they enlist the one person he never expected to see again to help clean up his image.  And so Dash is given a second chance to prove he's a changed man to the woman whose heart has been hardened since the morning he walked away.  Dash was a likable hero, one who grew and matured as the story progressed. He was fun and flirty and with each turn of the page he showed himself to be a man with a big heart more than ready to give it to the only woman for him.  Dash might've frustrated me a time or two at the start, but by the end of the story he had completely won me over.
Cassidy was a good match in the plan to remake Dash's image as she's someone who understands the rockstar world with her brother being a member of the band.  She's an immensely appealing heroine with a kind heart when readers first meet her, a heroine full of insecurities who doesn't find it easy to express her desires.  But in this story she shows a more determined side, a protective side that gets slowly worn down by the rocker bent on proving himself despite Cassidy keeping her heart hardened.  While there was a lot of baggage between these two, the sparks flying between them were more than obvious and very believable.  Playful and steamy moments were balanced with more heartfelt and sensual interludes as Cassidy slowly saw the importance of forgiveness.  To discover the love of a lifetime she needed to finally move on from the past in a journey full of heart and soul that pulled at my heartstrings.
On a whole this was a fast-paced romance of second chances, a journey of redemption, all set in the rockstar world with all the expected glitz and glamor.  Dash and Cassidy are an engaging pair, a duo whose actions kept me glued to the pages, rooting for them to find themselves back into each other's arms.  There are secrets surrounding them though, secrets and drama that Dash has to deal with in order to prove himself to Cassidy in their emotional journey to HEA.  Surrounding this entertaining main couple were the other members of the Kingston clan, a family who was supportive and who I look forward to seeing more of in future installments.  By the turn of the final page I was once again left smiling and impressed by the ability of Ms. Phillips to craft yet another man worthy of being called a hero in a book I definitely recommend!
My rating for this is an A-
*I got this book from the author for review in exchange for my honest opinion. 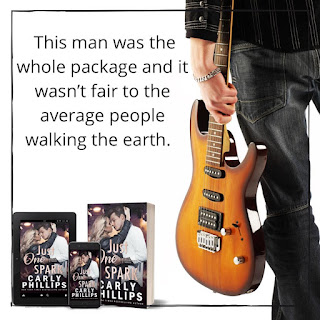 AUTHOR INFO:
NY Times, Wall Street Journal, and USA Today Bestseller, Carly Phillips gives her readers Alphalicious heroes to swoon for and romance to set your heart on fire. She married her college sweetheart and lives in Purchase, NY along with her three crazy dogs: two wheaten terriers and a mutant Havanese, who are featured on her Facebook and Instagram. The author of 50 romance novels, she has raised two incredible daughters who put up with having a mom as a full time writer. Carly’s book, The Bachelor, was chosen by Kelly Ripa as a romance club pick and was the first romance on a nationally televised book club. Carly loves social media and interacting with her readers. Want to keep up with Carly? Sign up for her newsletter and receive TWO FREE books HERE.
BOOKBUB AUTHOR PAGE  |  AMAZON AUTHOR PAGE  |  INSTAGRAM  |  FACEBOOK  |  TWITTER  |  WEBSITE  |  GOODREADS AUTHOR PAGE
at January 18, 2022