A hockey player who's more than what he seems wants to find HEA with the family he keeps behind the scenes, until the heroine's secrets get in the way, in this charming romance with just a bit of angst.  Keep reading to get a tempting taste of Sincerely, The Puck Bunny by Maren Moore, along with getting my impressions of this second installment in the Totally Pucked series, then add it to your bookshelf! 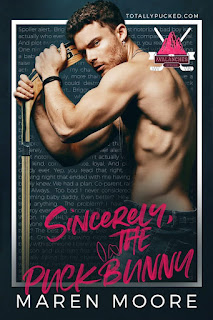 Who’s ready for Daddy Briggs?
Spoiler alert...
Briggs Wilson, the NHL’s most notorious bad boy isn’t actually who everyone thinks he is.
He’s kind, compassionate, loyal.
And plot twist?
The best baby daddy ever.
Yep, you read that right.
One weekend...One mind blowing weekend that ended with me having a baby with someone I barely knew.
We had a plan.
Co-parent, raise our daughter and put her first. Always.
Too bad I never considered actually falling for my charming baby daddy. Even better?
He wanted our family, more than anything. The problem?
I have a secret.
One that could destroy everything.
Sincerely,
The Puck Bunny
BUY here. 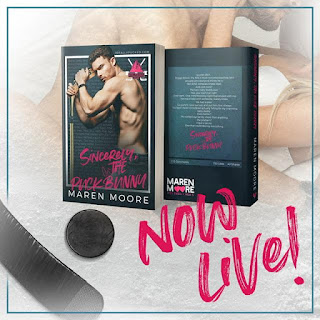 MY IMPRESSIONS OF THIS BOOK:
While unexpected pregnancies aren't my favorite romance trope, I was drawn to this story from the start because of my love for sexy athletes...and Briggs Wilson is definitely all that and more!  The media might see him as the bad boy of hockey, a player on and off the ice, but the reality of him is vastly different.  As the story of Briggs and Madison, the woman who turns his life upside down through the results of their one night stand and through the secret she's keeping, moves forward we see them changing not only as individuals but as a couple.  With each turn of the page the changes we see made me like them all the more, had me falling for them while I was on the edge of my seat waiting for Madison's truth to come out.  By the end I was utterly charmed by new daddy Briggs, with a heart warmed by a unique "family" of hockey players whose stories I look forward to reading next!
Briggs has had a life that's left him feeling bruised and angry, leading to a hockey career in jeopardy because of his hard living, along with a questionable reputation that has you seeing him in an unflattering light at the start of the story.  A brief respite though leads to a one night stand that changes everything for him and it's not long before he becomes my newest addition to my list of book boyfriends.  From the moment he met Madison there were definite sparks and watching the two of them grow closer together was delightful with lots of steamy interludes.  Their time away from the world, in the middle of nowhere, allowed them to be themselves and I liked who they started to show to readers from that moment on.  A few bumps along the way, as well as Madison's big bump, lead to big changes for Briggs that had him wholeheartedly embracing his new role as father.  He becomes completely smitten with baby Olive, interacting with her in scenes that made my uterus ache.  Though he started off trying to keep his relationship with Madison as a platonic couple, it's clear there's too many sparks to ignore, and it's not long before their relationship becomes steamy yet complicated with her secret hanging over them.  Briggs becomes a delicious hero with the birth of Olive, showing a soft and protective side to the bad boy persona seen previously.  He's a loving father who's determined to be the best dad ever, determined to do all he can to make his new family safe and happy.  To see that happen he gets surprising help from his teammates, a group of men who are like family to Briggs and who are equally charming in their own interactions with Olive.  Considering how awful Briggs's real family was to him, how manipulative they were, my heart was especially warmed by his teammates unwavering support of him through all his highs and lows.  Madison was a bit harder to like at times, particularly when it came to the secret she's keeping.  It was an obvious secret to readers from the very start, one that she easily could've shared at any point, especially as they were growing closer as parents and lovers.  I admired her mama bear attitude, admired her strength as a single parent, but was disappointed by her not telling Briggs the truth sooner.  Despite this secret hanging over them, I enjoyed their time together and the bond that formed between them was sweet and sexy.
With its delicious hero and endearing daddy/daughter interactions, this was a charming tale of unexpected family and second chances set in the hockey world.  Briggs became a better man as the story progressed, became the quintessential book boyfriend, and he was a definite highlight (especially in scenes with baby Olive).  While Madison wasn't a favorite heroine of mine, I did admire her motherly strength and her ultimately coming to Briggs's defense when he needed support most.  They were a sizzling pair, fun and flirty from the very start, becoming a solid parental pairing when Olive entered the picture.  Alongside this compelling main couple was an equally delightful cast of secondary characters,  teammates to Briggs who displayed brotherly bonds at every turn.  My favorites amongst all the teammates were Graham and Asher, sexy and funny, who endeared themselves to me as they argued over who was the better uncle...Graham especially charmed me in his own scenes with Olive and I'm definitely looking forward to his book.  All of these teammates have me excited for the future of this series and I'm waiting with breathless anticipation for where Ms. Moore takes us next!
My rating for this is a B+
*I got this book from the author for review in exchange for my honest opinion. 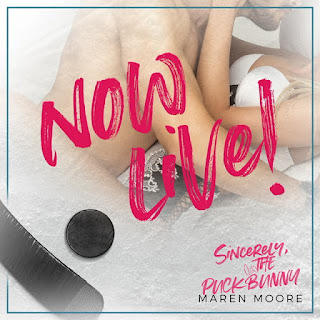