Book Release Blast for The Hustler by Gina Azzi (REVIEW)……..

A woman burned by her ex finds solace in the arms of a summer fling before discovering that he wasn't who she thought he was in this tale of second chances and starting over.  Keep reading to get a tempting taste of The Hustler by Gina Azzi, along with getting my impressions of this eighth installment in the Boston Hawks Hockey series, then add it to your bookshelf too! 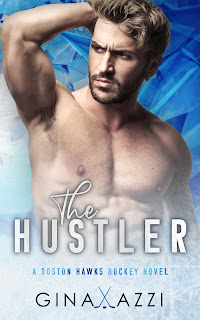 Theodore Edward Sims was supposed to be my hot summer hook-up, a stranger I slept with in Hawaii. Now, he’s my stepbrother’s new hockey teammate.When we met, Theo was a sexy surfer in Maui, riding waves by day and rocking my world at night. After being played for a fool by my ex-fiancé, Theo proved to be a source of instant gratification.
He was refreshingly honest, engaging, and incredibly charming. Theo built me up when it felt like my world was crumbling down.Turns out, he’s just like my ex. A liar.To avoid the media scandal of my failed engagement, I hightail it to Boston, where I’m forced to cross paths with a new version of Theo, aka Eddie Sims, Boston Hawks right wing. Here, he isn’t the well-connected, alluring surfer but a determined, angry hockey hunk with something to prove. Especially to me.Except I’ve written him off. Once a liar, always a liar.But Theo isn’t backing down. Instead, he’s hustling for my forgiveness. If I give him another chance, will he live up to his apologies? Or am I just lying to myself? 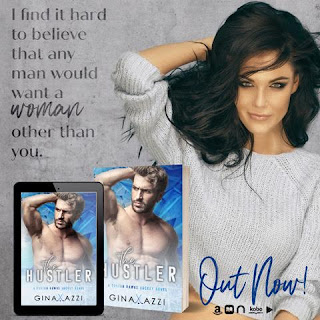 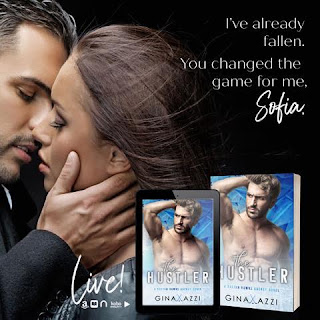 MY IMPRESSIONS OF THIS BOOK:
As a fan of sports-themed romances I was immediately drawn to this book and stayed glued to the pages courtesy of an amazing heroine and a hero who redeems himself beautifully.  Not having read the previous books in this series didn't mar my enjoyment either since all the characters laid themselves bare throughout the story, pulling me in easily.  By the turn of the final page I was satisfied, content with the second chance the hero didn't waste, and cheering for a heroine who deserved a HEA.
Theo/Eddie Sims is a man who's made plenty of mistakes in his life, a hockey player who comes from a family of money, and who's been used because of it.  For the last year he's been living a double life, engaging in behaviors and antics regarding his team that have taken him to rock bottom, and at the start of this story he's ready to make amends and start over at being a better man.  Helping him become a better man is a woman he meets at a wedding, a woman who discovers his deceitful past after an unforgettable night together.  Though she runs from him, Fate has a way of making what's meant to be happen, and when he gets paired with the newest addition to the hockey team he finds the one who got away.  Together they grow as people, working through their painful pasts to forge a future together in a heartfelt story of second chances.  Theo/Eddie had a lot to atone for and I was impressed with how well Ms. Azzi was able to redeem him.  As the story progressed he became more worthy of the title of book boyfriend as he never made excuses for the man he was before.  He owned up to his past in order to become a better man now.  It was a heartfelt journey he undertook, a journey full of heart and soul that pulled at my heartstrings.
Along with an incredible hero there's an equally wonderful heroine who brings out the best in Theo/Eddie.  Sofia Carpenter's had a rough past too with a father who went to jail and as a survivor of childhood cancer.  It had her acting out for awhile, but with age comes wisdom and she's now living life to the fullest.  With each turn of the page readers see a sweet and outgoing heroine, except when it comes to matters of the heart. Not knowing if her cancer will ever return has her leery of opening up her heart to another.  She's been burned by love before, so Theo/Eddie's lie is particularly hurtful early on and gives him an even bigger reason to make amends as well as fueling her fears of being betrayed by love again. Despite her fears she takes a chance on Theo/Eddie and together they become an unforgettable couple.  In a heartwarming journey full of heart and soul, these two grow as a couple and as individuals and it's a journey I felt privileged to take with them.  Layer upon layer was revealed and I came to care more and more about them while rooting for them to get their HEA...and I wasn't disappointed!
On a whole this was an immensely satisfying read with a larger than life heroine and a perfectly imperfect hero who becomes a better man through the power of love.  As part of the Boston Hawks Hockey series, Ms. Azzi nicely balances action on the ice with action off the ice while showing the familial bond the teammates have with one another. Despite Theo/Eddie's past bad behavior his teammates rally around him when he needs them most and I look forward to more stories set in this world.
My rating for this is an A-.
*I got this book from the author for review in exchange for my honest opinion. 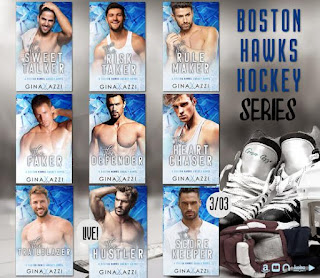 AUTHOR INFO:
I’m Gina Azzi, a book-obsessed, coffee-drinking, globetrotting, mama of soon-to-be three! I write sweet with a dash of spicy New Adult and Contemporary Romance full of good men putting in work to win the hearts of even better women.
A total Jersey girl at heart, I struggle with insatiable wanderlust and currently reside in Ontario, Canada with my family.
When I’m not dreaming up storylines or writing all the words, you can find me hanging with my littles, attempting to bake, or planning my next adventure.
Connect with me on social media or at ginaazziauthor@gmail.com. I’d love to hear from you!
Happy Reading! Xo,
Gina
WEBSITE  |  NEWSLETTER  |  FACEBOOK  |  READER GROUP  |  TWITTER  |  INSTAGRAM  |  BOOKBUB  |  GOODREADS AUTHOR PAGE |  AMAZON AUTHOR PAGE
at January 06, 2022