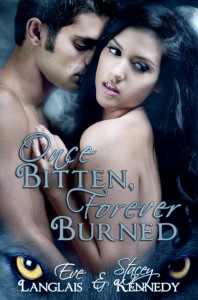 This is a smoldering anthology featuring two of today's exciting young authors and features two friends, made vampire on the battlefield, searching for redemption.  Through the love of two women forbidden to them through prejudice and fate, they find the happiness they've been searching for by committing the ultimate sacrifice.

This first story in this collection is Devon's Redemption by Eve Langlais and is probably my more favorite of the two.  Devon and Bethany had a love they thought would last forever, but after his change on the battlefield and her being violently claimed by and changed into a Lycan they now appear to be lost to each other forever.  This is an intensely emotional read with Bethany going through much more trauma than Devon.  She's been mentally, physically, and sexually assaulted by her Lycan mate Tyson and seeing that brutality makes you ache for her.  She refuses to give up and I applaud the strength she showed in getting away from Tyson.  She's a worthy heroine.  Devon is strong and sexy and is very accepting of his vampirism.  There's no bemoaning his situation like some vampires do and it's refreshing to see.  With some short stories you feel cheated when it comes to the relationship.  Sometimes the word count doesn't allow for a relationship to be fully explored, but because these two have a past I could easily understand them coming back together so quickly.  Their sexual interludes are steamy and perfectly spaced throughout the story so that the storyline flows smoothly.  The ending definitely makes you feel that there's more to this story with an intriguing world full of stories still to be told.  My individual grade for this is an A.

The other story in this collection is Cruz's Salvation by Stacey Kennedy and involves a Romeo and Juliet kind of storyline where Cruz the vampire is forbidden to claim the only woman he loves because she's a Lycan.  Kiara is that Lycan and at times seems very immature.  She keeps expecting Cruz to fix everything and doesn't have the backbone to stand up to her father about what she truly wants.  In that respect she's a much weaker heroine than Bethany.  She's had an easy life which encourages her immaturity.  Cruz is honorable and strong and willing to sacrifice much for Kiara's safety and happiness.  He's a carbon copy of Devon and it's easy to see why they're friends.  Having Devon show up in the story is a nice way to tie the two stories together and the ending leaves possibilities for the future.  The relationship doesn't feel as strong as the previous couples.  And I think it is because of Kiara's immaturity that their relationship doesn't ring true.  There's no equality between the two and I don't feel as strong of a connection.  My individual grade for this is a B+.

This was an entertaining anthology and I can't help but think that the world these characters inhabit would make a great series.  The battle between the Vampires and Lycans would make a great foundation to a series and if that happens then I'll definitely be in line for more stories.

My overall grade for the anthology is an A.