Review for Outcast Mine by Jamie Craig 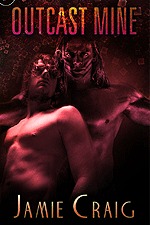 Aleron Pitre is a master of everything.  He's gotten through life by his clever scheming and faster tongue until the day he's sentenced to life on the prison planet of Tantoret where death is the only thing that's certain in this intriguing futuristic read from the m/m genre.  Because of the harsh conditions of the planet where mining for a mineral called chojal that is transformed into a lucrative drug quickly and painfully kills the prisoners, few guards are needed.  The guards that are there are Athaki who are aliens who are cat-like in nature and drink blood for the excitement.  The head guard Jasak forbids his guards from harming the prisoners in any way and punishes those that do.  Once he sets eyes on Aleron though his willpower ends and to save him from those trying to hurt him he claims Aleron as his mate.  As their relationship heats up so too do the dangers from off-planet worlds wanting to take over the lucrative drug trade and those fellow prisoners and guards wanting to take charge.  As the dangers come faster, Jasak and Aleron must sacrifice everything to make it out alive.

This is an excitingly fast-paced story full of steamy interludes and intriguing political games.  The characters are memorable with conflicts that bring out the unexpected in each one.  The romance between Aleron and Jasak flows seamlessly amongst the heart-pounding action and is steamy and loving.  Aleron is a human who's lived on the edge using charm to get ahead, never taking anything seriously and trusting no one.  Jasak is the exact opposite, he thinks through things too much and assumes everyone is as noble as him.  Together they make an amazing couple with a very believable relationship.  They were tender and yet strong and I enjoyed seeing them together.  Their sacrifices brought tears to my eyes and their happiness made me cheer and anyone looking for the perfect couple can look right at Aleron and Jasak.

The bad guys are aplenty in this world and keep you guessing throughout the story which keeps the pages turning quickly to find out what happens next.  The political intrigue adds a realistic element to the story and amps up the action and I could easily, and would love to see, a continuation of stories based in this world.  With enjoyable characters and roller coaster action I truly enjoyed this story and hated to see it come to an end.  It brings forth everything that's right in sci-fi and blends it beautifully with a relationship that anyone would want.  Jamie Craig created a story that is appealing on every level and I'm very excited to see what comes next.