Review for Embraced by Blood by Laurie London 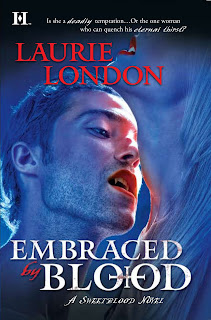 Alfonso Serrano has done many bad things in his life, but has been trying to put all that behind him and make amends for past deeds.  One action he took, under the guise of protecting someone he loved, was to break-up with Lily DeGraff.  With a blood assassin on his tail, he wanted Lily as far away as possible.  He's lived his life in isolation until the day he re-enters Lily's life when the assassin gets too close.  Lily was heartbroken when Alfonso left her.  She tried to find happiness elsewhere, but the only good thing that came of it was her daughter.  The kidnapping of her new trainee brings her and Alfonso back together and the passion that never went away.  Will both of them put past hurts and misunderstandings behind them to form a new life or will outside forces end their lives before they can even begin?

In this second installment in the Sweetblood series, Alfonso is back and still trying to make amends for his time as a double agent and the hurt that caused those around him.  He's isolated and trying to stay one step ahead of the assassin sent after him for his betrayal of the Darkbloods who are now using modern technology to find their prey and increase their numbers.  It was disheartening seeing even his own brother still harbor anger towards him over his duplicity and other Guardian's uncertainty around him.  After the tortures he went through you'd think that would be enough for redemption.  He's lonely though and scared that the assassin chasing him will go after his former love Lily.  He misses her desperately and the peace she brought him but getting too close will endanger her.  He's left no choice but to go to her when her trainee is taken instead of her for her scent-tracking abilities.  He's desperate to take care of her but very much respects her abilities and strength in defending herself.  He treats her as an equal which makes him very likable and what I look for in my heroes.  He's a strong character even with the limp left to him after a previous fight.  He hates his own weakness, but never complains.  Over and over, and in subtle ways, he shows what it is to be a hero.

Lily has always been referred to by her looks and her important lineage but wants to let her scent-tracking be what she's known for.  She's a strong woman who can easily take care of herself and interacts realistically with her co-workers.  She's extremely likable and seeing her struggles make her very relatable.  Just when she's made a name for herself her abilities unexpectedly  weaken which is a blow to her self-esteem.  It's the same thing Alfonso's experiencing with his knee injury and forms a connection between them.  Seeing them lean on each other and draw strength from one another is very romantic and attests to the power of their relationship.

There are quite a few villains in the story and each of them are very unique and add an interesting dimension to the story.  Some get what they deserve and one's story is still not resolved after turning the last page.  I'm sure we'll see more from this character and he'll be causing even bigger problems.  Along with the distinctive villains comes an intriguing set of heroic secondary characters who have me excited for future installments of the series.  The one that stands out for me is Jackson, the surfer-boy sex machine with an abundance of humor that seems to be losing control by needing more blood and energy to stay sane.  I'm worried for him at the same time as drooling over him.  His story can't come soon enough!

Having not read the previous book in this series I worried that I'd feel lost.  That wasn't the case at all because of a seamless introduction to the world of the Guardians and their villains and the history of these particular characters.  The world Ms. London created is an exciting one with lots of action and a group of entertaining characters whose stories I look forward to reading.  Fans of the vampire genre as well as those looking for heart pounding action and heart-wrenching romance will want to jump on board this exciting roller coaster of a series.

*This book was given to me by the author and gotten from NetGalley for my honest review.