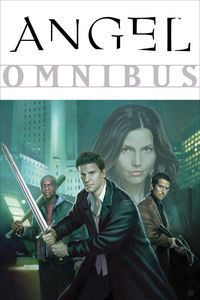 I was a huge fan of the tv show Angel.  I loved the idea of a vampire with a soul doing good deeds to make amends for all the wrongs he did early in life.  When it went off the air it was a sad day indeed.  That's why I was excited to come across the Dark Horse Comics release of a collection of the Angel comic books released to date and focusing on the first two seasons of the television show.  Conceived by show creator Joss Whedon, Brett Matthews (Serenity, Those Left Behind), Christopher Golden (Baltimore), Tom Sniegoski (Buffy the Vampire Slayer), and David Fury (Buffy the tv show, Lost, 24) this collection features the characters of Angel, Cordelia, Wesley, Gunn, Doyle, and Kate.  Within the pages of this compilation Angel faces demonic rats, Hollywood demons, zombies, and vampire hookers along with many other dangerous creatures.

I was impressed by the collection of creatures and otherworldly elements Angel and his crew fought in this collection.  The creatures were unique and drawn in an appealing and eye-catching way and kept me eagerly turning the pages.  The core group of characters were visually appealing too with their strong lines and bold looks.  The images didn't have much resemblance to their television counterparts which was a bit of a let down and a reason why I first picked this up.  Their language though was very reminiscent of their characters and brought out a chuckle from time to time.  From the stuttering uncertainty of Wesley to the slight arrogance of Cordelia, their speech certainly brought back fond memories.

I haven't read many comics but was impressed on a whole by the intriguing storylines and eye-catching visuals.  There was high action mixed with bits of humor and each story was more entertaining than the last.  Those familiar with the show, and those new to the world of Angel, will both find something to like.  I truly enjoyed my revisiting of Angel and his crew and will definitely search out more comics based on tv shows in the future.

*I received this from NetGalley for reviewing purposes.
at July 05, 2011