Review for Savor the Danger by Lori Foster 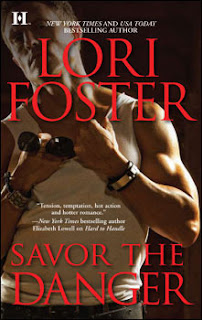 Jackson Savor has wanted Alani Rivers in his arms for years and one night he finally gets his wish.  Too bad he can't remember any of it.  Morning afters are always awkward, but for Alani Rivers the morning after is a nightmare.  Just when she thought she and Jackson came to an agreement for a no-strings affair, outside forces intervene to put both of their lives in jeopardy.  Once again the two of them are drawn into the dangerous world of human trafficking where someone bent on revenge is out to end their relationship before it barely starts.

This is Lori Foster's third book in the Men Who Walk the Edge of Honor series and each one has shown bits of improvement over the first.  For the most part the characters have gotten stronger and more likable.  The human trafficking theme which was a very strong element in the first two installments is still there but to a lesser degree this time around.  The relationship between Jackson and Alani is what's important in this release and seeing them together makes for a heart pounding, fun-filled journey full of sexy dialogue.

Of all the heroes that have been introduced in this series Jackson seems the most likable.  He's as heroic as the others in their business with an added layer of humor.  Both Dare and Trace were extremely serious in their books, whereas Jackson has many moments of humor.  He's snarky which adds to his sex appeal and makes his moments with Alani even more combustible.  He has secrets though that take away from his carefree attitude as Alani gets to know him and adds an interesting layer to the future of the series.

Alani has come a long way from the shell she was first in after being rescued from the human traffickers.  Her brother Trace still treats her like a child though and when it comes to sex she's very naive.  Considering everything she'd been through I'd have thought she would've been more knowledgeable in mind if not body in regards to sexuality.  I found that aspect of Alani a bit unrealistic and found her to be a liability when it came to the life threatening scenes because of her fears.

It was nice seeing all the previous characters interacting with the current couple and seeing their relationships flourishing.  Chris too is back and just as much fun as ever.  I'd still love to see him find happiness in his own story but I don't see that happening anytime soon.  Who I do see as a couple in the future is a new addition to the team named Arizona, a young girl with a childhood full of demons, and bounty hunter Spencer with his own plans for revenge.  Both of these characters are full of rage and only in each other's company do they seem to find peace.  Their introduction in to this story was a bit jarring though and took the focus away from Jackson and Alani.  The villain too came out of nowhere and I wish the danger they represented would have been stronger throughout the story.  As it was they were a bit too over-the-top to take seriously and put a damper on the seriousness of the finale.

This was an enjoyable story that mostly wrapped up the arc of the human trafficking storyline.  I loved the playfulness of the main couple and found their frequent sexual interludes to be super sexy.  This was an exciting story with memorable characters and intriguing glimpses of other characters that leave the reader excited for future installments.  If you're looking for a nice balance between steamy sex and edge of your seat suspense then grab a copy of Lori Foster's latest release.

*I received this from NetGalley for reviewing purposes.
at July 28, 2011