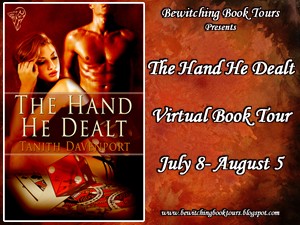 Before we get to today's guest post and giveaway I want to thank Tanith Davenport for giving me the chance to read her steamy story and Bewitching Book Tours for making all this possible.  Now let's get to the good stuff.

When I first began trying to get my debut novel published, I discovered there were certain guidelines to be followed when writing a hero. This bothered me a little, because my hero didn’t quite fit the mould.

Ash, you see, is a college football player and typical jock. He's muscular and attractive, certainly. However, he's also inarticulate, arrogant and - at the beginning of the story - has a reputation for being a little too quick on the trigger.

Can you have a hero as flawed as Ash?

I've read romance novels before with arrogant heroes, although "arrogant" isn't always the word used. How many times have we read a story where the hero deliberately gets under the heroine's skin? And how many times has it turned out that the heroine's opinion of him as a self-centred jerk turns out to change once she gets to know him?

Inarticulate? It certainly made his dialogue a challenge to write, since I had to pack meaning into shorter sentences and long silences or have Ash express his feelings physically - a forceful hug, a punch to a wall, a breathless pause while his hands were shaking. But showing his emotions in this way was true to Ash's character, and therefore more realistic to read.

And I was never into poetical men anyway.

But what about the unfortunate reputation? Let’s face it, there is very little that is sexy about premature ejaculation, no matter how you spin it.

Until you consider the vulnerability angle.

I can think of few things more embarrassing to an overly-masculine college jock who considers himself a sex god than a reputation for being quick on the draw. It’s a crack in his arrogant veneer, and a great way for the heroine to see his vulnerable side, making her want to step in and restore his confidence.

And it also gives plenty of opportunities to show them testing his limits of control…
***AUTHOR BIO***
Tanith Davenport began writing at the age of sixteen as a way of utilizing her ability to drift into daydreams at any hour of the day or night. Her interests range between rock music and modern cinema to medieval literature and classical singing. She loves to travel and dreams of one day taking a driving tour of the United States, preferably in a classic 1950s pink Cadillac Eldorado.

“The Hand He Dealt” is Tanith’s debut novel and was released by Total-e-Bound Publishing on 13 June 2011.
www.tanithdavenport.blogspot.com 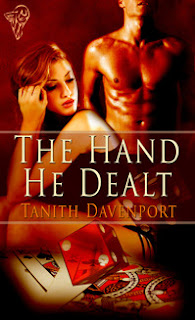 Book Description:
Astra Scott likes to live life to the full. A sorority girl and Gaming Management student, she spends her days studying and practicing guitar, and her nights partying or working at the Fountain Casino, where she has an internship as part of her final semester. The only blot on her landscape is Ash Drake, her best friend Sasha’s boyfriend. Arrogant, physical and blond, Ash has never forgiven Astra for her rejection months earlier and enjoys annoying her at every turn.
But when Astra’s boyfriend Harry reveals a shocking secret, Astra responds in the only way she can think of: by finding a way to take on a more attractive, masculine role in the relationship. Her experimentation with sex toys finds a surprising outlet in Sasha, but when Ash discovers their secret and wants to get involved, Astra finds herself torn between dislike and desire… and as their undercover relationship grows, Astra finds herself falling in love, a path she feels can only end in heartbreak.
For Ash may be the only man whose own fantasies are a match for hers, but can she knowingly steal his affections from her best friend?
http://www.total-e-bound.com/product.asp?strParents=&CAT_ID=&P_ID=1244
EXCERPT:

Two hours later, and Astra stood in front of her bedroom mirror, holding in one hand the toy she had bought from Amy’s Delights.

Rubber underwear was laced through her fingers, a small plastic remote control dangling below on the end of a long cord. And attached to the front—

It was a strap-on.

And it was purple.

A purple length of shiny plastic. A perfect simulacrum of a veined, circumcised penis, five inches long and of a thickness Astra considered average, just the right width to wrap a hand around.

Watching herself in the mirror, she closed one hand around its length, giving it a tentative stroke.

She tried it again, this time holding the remote control and flicking the switch. A sudden buzzing, accompanied by a muted vibration through her jeans, made her jolt sharply.
Interesting.

Flipping the switch again, she rocked her hips slowly, her eyes glazing. In her mind formed a picture of Harry’s smooth back and bare buttocks, thighs parting to receive her, Harry’s voice gasping, begging for more, more, please, more…

The switch snapped off.

Astra eyed herself coolly, squaring her shoulders, her legs automatically widening into a masculine stance.
***GIVEAWAY***
Would you like to win a digital copy of The Hand He Dealt?
One copy is being given away tour wide and is open for all, International welcome.
To enter just leave a comment at one or all of the stops along the tour.
A winner will be chosen from all the tour stops after the tour ends on Aug. 5th. The winner will then be announced on the Bewitching Book Tours site.
at July 20, 2011