Review for Trace of Fever by Lori Foster 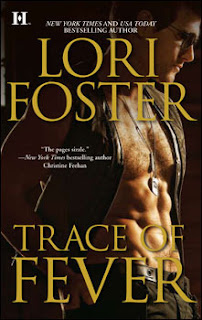 Trace Rivers is a man on a mission.  Ever since his sister was rescued from a human trafficker he's determined to bring down the man responsible.  He's undercover acting as head of security for Murray Coburn trying to gain information on the human trafficking ring Coburn runs when Priscilla Patterson enters the picture.  Claiming to be Coburn's daughter, she too has a hidden agenda, and it involves killing her new-found father for the tortures he put her mother through years before.  Trace's job just got a lot harder and between trying to fulfill his mission and protecting Priscilla, he doesn't have time for the complications of love.  But as things become more dangerous for Priscilla will she be able to put aside her revenge or will it be too late for Trace to admit his true feelings?

This is the second book in Ms. Foster's Men Who Walk the Edge of Honor series and continues to address the issue of human trafficking.  The hero this time around is Trace Rivers who had a large role in the first book in this series and showed us just how capable he was in a crisis.  He's taken the lead this time around and oozes strength and sex appeal.  He's the strong silent type except when Priss is with him.  In her presence there's non-stop verbal foreplay and he becomes the master of seduction through words and glances.

In the previous book I found the heroine to be the weakest link, but I'm happy to report that the heroine in this story is much more likable and an equal to the hero.  Her childhood was one of seclusion because of the torture her mother went through and the subsequent fear that left her feeling.  Upon her mother's death Priss vowed revenge and finally gets to experience things other women do.  And one of those things she wants to experience is Trace's body.  She's a strong woman who's not shy about what she wants and her and Trace are combustible together.  She's quite capable of fighting by his side and fits in perfectly with the rest of the group.  She's not always in need of saving and in fact does a bit of the saving on her own.

We see many characters from the previous book like Dare, Molly, and Chris and they add a nice bit of humor and familial stability to the chaos of the team's agenda.  There's an extra bit of humor in the story from a new operative to the team, Jackson, who will be the hero of the next installment and who has a connection to Trace's sister.

The villains in this story are truly nasty.  Murray Coburn treats women like objects and the story doesn't shy away from showing that.  Both his thoughts and actions make him despicable and you root for his demise.  His lover, Helene Schumer, is equally as nasty.  Being in charge of the drugging of those kidnapped she uses her concoctions against Trace in a scene where readers will want to see her demise in a number of extremely painful ways.

All around I found this to be a stronger story than the previous installment.  The main characters were more likable and on more equal footing.  There were welcome bits of humor amongst the direness of the storyline and the action scenes kept me on the edge of my seat.  The glimpses we had of Jackson have me very excited for the next installment in this series and hopefully a true sense of closure for Trace's sister concerning her kidnapping.  I recommend this story to those looking for a hero to die for with an equally strong heroine being put through the wringer leading to a very satisfying conclusion.  And definitely sign me up for the next installment!

*I received this from NetGalley for reviewing purposes.
at July 13, 2011