A young man finds himself growing attracted to his friend when a fake relationship between them becomes something more in this sweet and sensual contemporary romance.  Keep reading to get a tempting taste of Decoy Date by Mira Lyn Kelly, then add it to your bookshelf when it releases on December 4th.  In honor of this fourth installment in The Wedding Date series make sure to fill out the form below for the chance to win 1 of 5 copies of the previous book in this series too! 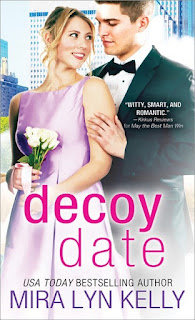 Fake relationship. Real feelings. Big problems.
Brody O’Donnel doesn’t believe in happily-ever-afters—at least, not for himself. But he wants the best for his vivacious, beautiful friend Gwen Danes, and he’s tired of watching her pine for a clueless man. Figuring a little bit of jealousy will motivate the guy, Brody proposes a fake relationship. It’s an outrageous plan, but Gwen figures there’s no harm in it—until they share a passionate kiss she never saw coming.
Suddenly, Gwen’s fighting a growing attraction to a man she knows she can’t have. After all, he’s just faking it…isn’t he?

USA Today bestselling author Mira Lyn Kelly grew up in the Chicago area and earned her degree in fine arts from Loyola University. She met the love of her life while studying abroad in Rome, Italy, only to discover he’d been living right around the corner from her. They live in rural Minnesota.

a Rafflecopter giveaway
at December 02, 2018