Start the new year off right with this sensual and exhilarating sci-fi thrill ride as a band of thieves, led by a strong-willed heroine, find themselves having to trust a man who’s not always trustworthy.  Keep reading to get a tempting taste of Nightchaser by Amanda Bouchet, then start counting down the days until this romp releases on January 1st.  In honor of this first installment in the Nightchaser series make sure to fill out the forms below for the chance to win multiple prizes too! 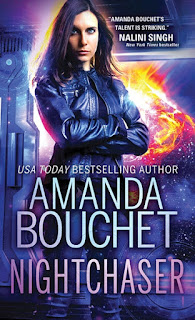 Tess Bailey: the galaxy's Most Wanted.
Captain Tess Bailey is in deep trouble. She and her crew are on the run, pursued by a tyrant who'll take them dead or alive. Tess's best hope is a tall, dark, and much-too-appealing stranger, Shade Ganavan, who says he can help her. But his motivations are far from clear...
Shade Ganavan: arrogance, charm...and that special something that makes you want to kick him.
With the dreaded Dark Watch closing in, what Tess and Shade don't know about each other might get them killed...unless they can set aside their differences and learn to trust each other before it's too late.

Two people on the avenue at the bottom of the Squirrel Tree both directed me to the same place: Ganavan’s Products and Parts. It wasn’t too far—still in the docking district and within easy walking distance—so I figured it was a good place to start.
I found the shop at the base of a towering, warehouse-type structure. It was recessed into the ground a few feet, requiring me to take a short flight of stairs down to access it from street level. A bell tinkled over the door when I swung it open, surprising me with the light, merry chiming. I couldn’t help appreciating the quaint touch in the otherwise industrial setting of the city’s sprawling, somewhat dingy docks.
Inside, the shop was bigger than I’d expected and crowded with metallic shelving packed with more stuff than any space rat could ever possibly want. It was almost overwhelming—and half of it was covered in dust. Motes twirled in the air, floating in the sunbeams streaming in through the high-up windows that let in most of the shop’s light.
I didn’t see anyone behind the register to query about repairs, so I walked the aisles, looking for anything that might be of use. I picked up forty rounds of LW-9 bullets in a sleek metal case for our Grayhawk handguns, but I didn’t really need things like the rest of this—gadgets and doodads and crap. I needed reinforced metal panels and someone who could weld them onto my ship.
I scanned the shelves for fuses and wiring, too, but didn’t see anything. The Endeavor’s electrical components weren’t in great shape, even with Big Guy’s brief help, and my console was currently dead. I’d have to see, but I hoped Jaxon would end up being enough of an electrician to fix it. When it came to a ship’s central power grid, I had some skills myself.
“Can I help you?” a man asked.
I turned and watched the speaker walk toward me from what looked like a back office, his steps silent and almost prowling. Despite his height and imposing physique, I might not have heard him coming if he hadn’t made his presence known.
Was this Ganavan? He was tall, with at least a few inches on me. He was wide, too, but mainly in the shoulders. His body looked healthy and trim. Like me, I thought his origins could probably be traced back to pre-exodus Caucasian. Unlike me, he had a healthy tan.
The fact that he was tall, dark, and hot didn’t stop my usual default mode from kicking in—to assess any stranger I met and determine how I would try to bring that person down in a fight.
I came up with a defensive scenario before he got too close. A ducking spin as he came at me, his own weight hopefully throwing him off-balance as I slid out of the way. A quick, hard kick to the back of a knee to get him lower than me. A sleeper hold from behind with my arm in a tight V around his neck, cutting off the blood flow through his arteries. With any luck, I could knock him out without ever touching his windpipe.
Unfortunately, looking at him, I estimated my chances of success with any of that at about eight percent, which made me glad there was no reason to think he was unfriendly.
He watched me, too, his brown eyes like lasers. I’d rarely been subjected to such a steady stare, especially from a gaze that held definite hints of interest and appreciation. My body started to heat from more than just the sunlight filtering down from the high windows. The light hit him at an angle, turning his eyes a tawny amber, like those of a jungle predator.
No. A jungle animal would scare me, and this man didn’t, despite his obvious physical advantage. His eyes were more the color of dark honey, appealing, all warm and tempting in the sun.
My taste buds seemed to burst to life with the memory of sweetness on my tongue. Starway 8 was one of the few places left in the galaxy with an actual apiary, and the liquid gold the director sold to the wealthy elite in Sector 12 was the main source of revenue for the orphanage. This man’s eyes looked just like honey number seven—my favorite. Almost the darkest. The darker honeys had more flavor.
He stopped a few feet from me, and those honey-brown eyes dipped, taking me in from my head to my toes. My clothing was skintight, and I felt a blush flare under his slow inspection.
Finally, he looked up. “Just checking for weapons.”
I snorted. “Really? Weapons? I haven’t heard that one before.”
He winked at me like the scoundrel I highly suspected he was. “We’re inventive out here in 2. Where’re you from?”
“What makes you think I’m not from here?”
“You’re a 12-er. I can hear it in your posh voice.”
Time seemed to slow down as my mind processed his words one by one, even though it only took a second. I hardly spoke to anyone besides my crew, and they didn’t care what I sounded like. Blurring my trail outside of the Endeavor meant it was time to work on a new accent, though. It was too bad. The precise, cut-glass diction was one of the only things I liked about Sector 12.

Amanda Bouchet grew up in New England where she spent much of her time tromping around in the woods and making up grand adventures in her head. It was inevitable that one day she would start writing them down. Drawing on her Greek heritage for the setting and on her love of all things daring and romantic for the rest, her debut trilogy, The Kingmaker Chronicles, took form. She writes what she loves to read: epic exploits, steamy romance, and characters that make you laugh and cry.
Her first novel, A Promise of Fire, won several Romance Writers of America chapter contests, including the Orange Rose Contest and the paranormal category of the prestigious Golden Pen.
A French master's graduate and former English teacher, Amanda lives in Paris, France. She met her husband while studying abroad, and the family now includes two bilingual children who will soon be correcting her French.

a Rafflecopter giveaway
at December 29, 2018