Book Tour for All of Me by A.L. Jackson (Review & GIVEAWAY)

Two people bruised by their pasts try to find a future together just as evil men seek to destroy them both in this sexy and suspenseful story full of heart and soul.  Keep reading to get a tempting taste of All of Me by A.L. Jackson, along with my impressions of it, then add this unforgettable read to your bookshelf.  In honor of this second installment in the Confessions of the Heart series make sure to fill out the form below for the chance to win 3 signed print books from the Fight for Me series, a signed print copy of the previous book in this series, and a $50 Amazon GC too!

Here’s a message from Ms. Jackson...My loves! I am so proud to bring you ALL OF ME!! I am MADLY IN LOVE with this story - Ian and Grace absolutely seeped into my soul and became one of my very favorite couples I've ever written. This book...it's EVERYTHING! I am so excited for you to fall in love with it the way that I did!!!⋆Sexy Attorney⋆Forbidden Romance⋆The one woman who will make him question everything. 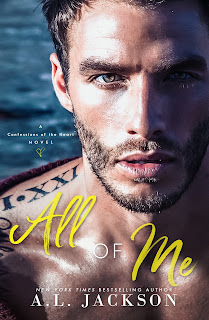 People call me callous. Arrogant. Ruthless.
I call myself tenacious.
One of the most powerful attorneys in Charleston, I don’t let anyone or anything stand in my way.
Until a chance encounter changes everything.
One glance.
One touch.
One night.
It only leaves me wanting more.
But Grace is off limits. Most people would even say forbidden.
Everyone knows an attorney can’t sleep with his client.
Too bad I already did.
And even with the threat of losing everything, I don’t know if I can stop myself from having her again... 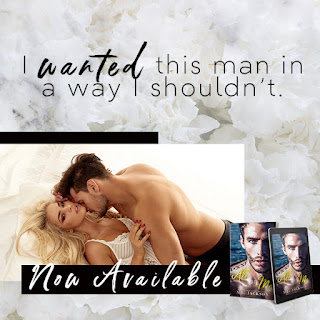 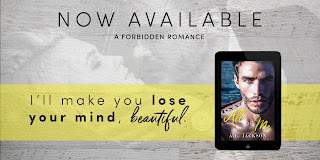 HEAs are hard to come by in romance novels and Ms. Jackson’s made that abundantly clear in this tale that puts its characters, and readers, through the wringer from the first page to the last.  The journey that lawyer Ian takes is a powerful one, one full of tears and anger for all he endured as a child, but by the end all the pain that comes before makes it all worthwhile in a conclusion that left me smiling.  Joining him on a journey to HEA is a woman who has her own bruises and is desperate to find one person willing to fight alongside her.  Together they scorch up the pages, while pulling at the heartstrings, in an unforgettable tale that showcases the healing power of love.

In the previous installment in the Confessions of the Heart series readers were introduced to Jace and Ian Jacobs, with their heartbreaking childhood that left an indelible mark that’s made happiness and peace even harder for them to achieve.  The previous book gave us an inkling into the guilt and scars Ian carries, but this story pulls readers in wholeheartedly and has us hurting right alongside him.  After a childhood of endless hunger and abuse, Ian swore never to give anyone power over him.  He did whatever necessary to gain wealth and respect, did things that dirtied his soul, and he’s finally on the cusp of getting all that he thinks he wants.  The moment he meets the sweet and sexy Grace though is the moment his desires change.  Before, revenge is all he thought himself worthy of.  But as Grace looks to him to be her hero, he finds himself desiring her and the HEA he could have with her...if only he can slay the demons from his past.  Ian’s a complex character, a lost little boy one moment and a dangerous adversary the next.  Being around Grace brings his heart stuttering back to life, but when her and her children are put in jeopardy he has no problem using the questionable contacts he’s come into contact with throughout the years.  Ian’s a delicious hero, one worthy of love, and the sacrifices he makes to become a part of Grace’s family endeared him to me and had me wanting to hug him for the bumpy journey he took to get to HEA.

Adding in an even deeper level of emotional intensity brings readers into the life of Grace Dearborne, her children, and their attempts to get out from under the clutches of a corrupt and vile politician whose cruelty has left each of them bruised.  Grace was a young, idealistic, woman living with her grandparents after the death of her parents and desperate to get out on her own.  That desire left her vulnerable to the choreographed seductions of Reed Dearborne who took over her life in the blink of an eye.  By the time she realized how cruel and dangerous he was, she had three children she was desperate to keep safe.  With Reed’s connections though, she finds it hard to find a savior willing to take him on.  The instantaneous connection she feels towards Ian at a party therefore feels like divine intervention, but he’s no angel as he tells her repeatedly.  Knowing that he carries numerous scars inside and out doesn’t hold her back, it just draws her to him all the more as she sees only the good in him and desperately wants him to see it too.  Grace is a sweet and caring heroine willing to do whatever it takes to keep her children safe.  As the story races to its exhilarating conclusion she shows herself to be a strong-willed heroine ready to fight alongside Ian in a battle for his soul and the HEA she sees for them.

From start to finish this was a sexy and suspenseful story full of bad guys doing bad things and scorching encounters between Ian and Grace.  These two lost souls found moments of love and acceptance in each other’s arms that had me rooting for them every step of the way.  The abuse they’ve both dealt with in their pasts was heartbreaking and it wasn’t sugarcoated here which brought a few tears to my eyes as these scenes played out.  Along with an immensely appealing main couple came Grace’s three children whose scenes were absolutely adorable and brought out an especially likable side to Ian.  Being around them had him longing for them to have a better childhood than he had and it’s what drives him to make Reed pay for his cruelty.  Readers also get an update on Jace and Faith, the HEA they found in the previous book, and the joy they hope Ian will soon find.  I was again captivated by badass brute Mack, and the mysterious case he’s working on that very well might be part of the next installment in this series, and am counting down the days until he takes center stage.  He has just as many secrets and bruises as Ian and Jace, but is just better at hiding them.  Though this book can be read on its own, readers will want to get even more insight into this captivating hero by reading the first book in this series as it just keeps getting better and better!