Young love becomes an erotically-charged connection as adults in this MC-fueled romance set amidst the festivities of the holidays.  Keep reading to get a tempting taste of Tis the Season by Kristen Hope Mazzola, along with my impressions of this sexy and suspenseful tale, then add this ninth installment in the Unacceptables MC series to your bookshelf too! 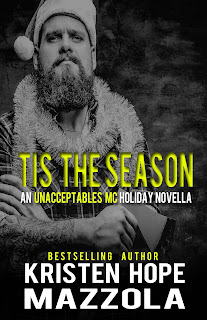 It’s finally my time.
I am an outlaw. The son of Abel Hellock. The legacy of my club.
They all called me too sweet for the life. My club was losing faith in me and the entire organization. I had to prove to them and myself that I was the man my father would have wanted me to be.
When the holidays rolled around, I was more Scrooge than Jolly Saint Nick. That is until she tested me: a girl that I didn’t know but I needed to protect. I wasn’t prepared for how my life was about to change. But if there is one thing I have learned from being in my organization: you have to be ready for anything.
I am Collin Hellock and this is my story. 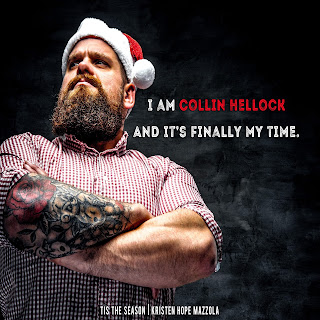 The love of family, and finding your place in the world, drives this sentimental addition to the Unacceptables MC series.  When young lovers finally give in to their years of attraction everything changes for them in this fast-paced read that will keep readers on the edge of their seats as lives and loves are put in danger.

Collin Hellock has been on a downward spiral since the murder of his father, and it’s starting to put his place in the Unacceptables MC in jeopardy.  He’s become a disappointment, to his club and to himself, with his constant brushes with the law and it’s clear that something needs to change.  With Christmas fast approaching he’s especially hurting, with loving memories from past Christmases on his mind, but his brothers have a plan to get his life back in order.  It’s a plan that quickly goes awry though when the woman he’s been attracted to since they were kids becomes a pawn in a dangerous battle.  Collin will finally have to step up to be the man his father wanted him to be if he has any hope of having a HEA as it their tale becomes a hard-fought journey.  Collin’s a likable character who’s clearly hurting as the story starts.  He hates his actions but doesn’t know what to do to stop himself.  Being sent to help a fellow club puts him in close quarters with the tempting Harlow, a young woman he’s been attracted to since they were teens, and forces him to address feelings he’s long kept buried.  The two of them are combustible together in fun and flirty interactions teeming with sensuality.  The closer they get, the stronger and more self-assured he becomes, which had me cheering.  For her, to be worthy of her, he finally starts embracing his legacy and making a family worth fighting for throughout this novella’s heart-pounding conclusion.

Harlow was born into the MC life with her father Blaz being club president, so she’s used to all the secrets and danger.  It’s made her strong-willed, at least the brief glimpses readers get of her, and it has her boldly claiming Collin when she finally gets the chance in a romance fueled by a teenage crush.  While Collin is in despair over the holidays, it’s Harlow who constantly tries to renew his Christmas spirit in sweet and sentimental exchanges that showed the grumpy badass biker in an endearing light that boded well for their future before her life was put in peril in a plot device that came out of nowhere.  Even after all the trauma that befell her at the hands of nefarious men Harlow never lost her strength and happiness and it ultimately made her a solid support to Collin in their fast-paced journey to HEA.

This was a quick read that gives readers a bit of everything you expect from an MC romance.  There’s bits of sexiness and suspense, along with a strong sense of family and brotherhood.  Collin’s an appealing hero who you can’t help but root for, especially with the holidays fast approaching, as his hurts became mine.  Harlow was a good match for him as she pushed him out of his complacency and for that alone I liked her.  I also liked her lively spirit and bravery in claiming Collin when given the opportunity, as well as fighting for her life when she’s in danger.  Though the time spent with her was enjoyable, I wish more time had been given to her as we barely scratched the surface of who she is.  The effects of her time spent in danger were also glossed-over which was a disservice to her and a frustration to readers.  The reasons behind her being in harm’s way also weren’t very clear with the quick resolution further frustrating readers and leaving the narrative feeling cut off.  The overall ending though was a heartwarming one which is just what you want from a holiday-themed romance and though this story wasn’t perfect it was a pleasant addition to the series and to the season. 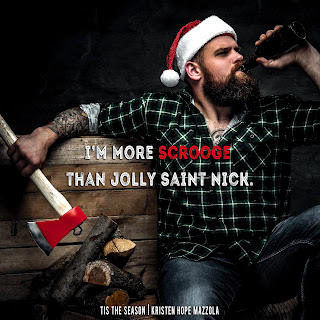 Bestselling author, Kristen Hope Mazzola, is a Florida native that has found herself loving a North Carolina life. She writes contemporary romance ranging from steamy romantic comedy, sexy erotica, angsty new adult, all the way to sports romance – with dirty bikers, hot military men, and swoon-worthy rockstars in between. A portion of her royalties is donated to the Marcie Mazzola Foundation.