Book Spotlight on Earl to the Rescue by Jane Ashford (GIVEAWAY)

A young woman left destitute, with nowhere to turn, finds herself accepting help from a man carrying secrets of his own.  Keep reading to get a tempting taste of Earl to the Rescue by Jane Ashford, then add this Regency romance to your bookshelf.  In honor of this re-release of a classic romance from Ms. Ashford’s backlist make sure to fill out the form below for the chance to win 1 of 5 copies of this book too! 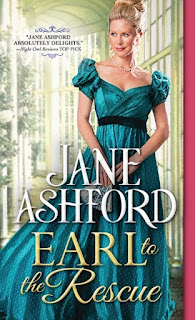 A beloved Regency romance from Jane Ashford, now available after over 25 years!
Who needs a knight in shining armor when there’s an earl at your side…?
Gwendeline Gregory doesn’t know what to think when she encounters the dashing Alex St. Audley, Earl of Merryn. She’s in over her head in London Society, trying to fend off a scoundrel who will stop at nothing to ruin her. On the brink of a devastating scandal, the earl arrives just when she needs him most. But are his motivations trustworthy? And can he avert ruin for both of them?

“But you must allow me a few moments of conversation, Miss Gregory,” protested Mr. Blane, retaining his grip on her arm. “We’ve had so little chance to get acquainted since you came to London. I feel ashamed to have neglected the daughter of old friends in this shabby way.” He seated himself and pulled Gwendeline down beside him. “Ah, that’s better. Now we can talk comfortably.” He turned toward Gwendeline and surveyed her with hooded eyes. “Tell me your impressions of London, Miss Gregory, now that you are an established resident.”
“I… I like it very much,” faltered Gwendeline. “Everyone has been very kind.”
“Particularly Lord Merryn, I should say.”
“Yes. And his mother also.”
“Ah yes, his mother. Are you happy staying with the countess? How long do you remain?”
“I’m not sure.” Gwendeline felt no inclination to tell him about her own house.
“So like and yet so unlike,” Mr. Blane mused. “It scarcely seems possible.”
“B-beg pardon,” said Gwendeline.
“Forgive me. But I cannot see you without thinking of your mother. Is it true that you never knew Annabella at all?”
“I rarely saw either of my parents. They were always busy elsewhere.”
“Sad. Very sad. Your mother was one of the most spirited, delightful women I’ve ever met. You might have learned much from her.”
“Perhaps, sir,” Gwendeline said stiffly. “Many people seem to think it is better I didn’t. And I must say I’m inclined to agree. My parents certainly didn’t care about my happiness or my future. If it hadn’t been for Lord Merrynand my father’s other friends, I’d be destitute.” She raised her chin.
“Ah yes, these unknown friends,” Mr. Blane replied. “Do you know, I have made a few inquiries among your father’s friends and acquaintances. None of them knows anything about a provision for you, though many would be delighted to make one, I’m sure. Strange, isn’t it?”
Gwendeline felt cold. “Lord Merryn knows who they are. He has promised to take me to thank them all.”
“Has he?” Mr. Blane sounded interested. “How charming for these mysterious benefactors. If only I’d known in time, I too might have had the pleasure of being thanked by you.” His smile made Gwendeline even more uncomfortable. “Another odd thing. You know, it never seemed to me that Lord Merryn liked your father above half. Your mother now, that was another thing. But your father? They never appeared to get on at all.”
“I’m sure…” Gwendeline stopped, not wishing to explain anything to this man or add to his alarmingly broad knowledge of her circumstances.
“It’s very strange,” Mr. Blane said reflectively. “Now what could Lord Merryn...”
“What of Lord Merryn?” said a lazy voice at Gwendeline’s side. “I’m flattered to be the subject of your conversation.” Gwendeline looked up to find the earl standing beside the sofa; she felt a great relief. “This is our dance, I believe, Miss Gregory,” he said. “You haven’t forgotten, surely?”
“Yes, I… I did,” said Gwendeline, rising. “I mean no, of course not.”
“Miss Gregory is tired,” put in Mr. Blane. “She doesn’t wish to dance again this evening.”
“Indeed?” The earl raised his eyebrows. “But it’s the last dance and a waltz. You promised it to me.” He looked at Gwendeline.
“I feel much better after sitting down for a while,” Gwendeline replied. “And I must keep my promise.” She took Lord Merryn’s proffered arm.
Mr. Blane stood. “I bow to necessity, but I am desolated. We must continue our delightful conversation some other time, Miss Gregory.”
Lord Merryn looked at Gwendeline as they walked onto the floor.
“You’ve rescued me once again,” she said a little breathlessly. “Thank you.”
“You didn’t enjoy your talk with Blane? Many women find him charming.”
“Well, I don’t. I find him extremely unpleasant. In fact, I would be happy never to see him again.”
“Such heat.” The earl smiled. “What has Mr. Blane done to earn your scorn?”
“I don’t like the way he speaks to me or looks at me. And he talks continually of my mother.” She looked up at the earl. “Was he in love with her, Lord Merryn?”
For the first time in their acquaintance, the earl looked genuinely and completely startled. “What makes you ask me that?”
“He talks of her in such an odd tone. I really can’t describe it. But it makes me believe that he felt something for her.”
The earl was looking at her with a new expression that Gwendeline couldn’t identify. “I really cannot tell you what Mr. Blane feels,” he answered. “We are not well acquainted.”
“That reminds me of something else he said,” Gwendeline interjected. “He has asked my father’s friends about the money provided for me, and none of them knows anything about it. You’ve never kept your promise to take me to thank them, Lord Merryn.”
The earl smiled down at her as they whirled across the floor in the waltz. “Your tone is absolutely accusing. What is it you suspect me of? Stealing the money? I assure you I did not.”
“No, of course not. But I can’t seem to learn anything about the people who helped me, and Mr. Blane said that you and my father didn’t, that is, were not good friends at all. I’m confused.”
“Mr. Blane seems to have said a great deal. Whom do you prefer to believe, Gwendeline? Mortimer Blane or me?”
“You, of course,” she answered. “But I should like to find out…”
“Then you will accept my word. There is nothing wrong or mysterious about your situation.” 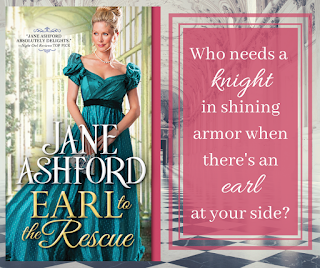 Jane Ashford, a beloved author of historical romances, has been published in Sweden, Italy, England, Denmark, France, Russia, Latvia, and Spain, as well as the United States. Jane has been nominated for a Career Achievement Award by RT Book Reviews. She lives in Los Angeles, California. Follow her at www.janeashford.com.

a Rafflecopter giveaway
at December 01, 2018