A shy and quiet school teacher finds herself drawn to a sexy hockey player in need of a tutor in this endearing and sensual hockey-fueled romance.  Keep reading to get a tempting taste of Chasing Charli by Kat Mizera, along with my impressions of it, then add this sixth installment in the Alaska Blizzard series to your bookshelf! 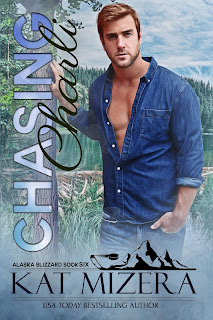 Resisting her may be his toughest test of all...
Finnish hockey star Miikka Laasonen may seem to live a charmed life, but the reality is that he's lonely. His struggle with learning the English language makes it hard for him to fit in and to make matters worse, his Finnish girlfriend tires of their long-distance relationship and dumps him.
Kindergarten teacher Charlotte “Charli” Bartosiewicz made a life-changing decision in her teens, and she’s battled guilt and regret ever since. She punishes herself by refusing to date and staying to herself because she doesn't feel worthy of love.
When introduced by a mutual friend, Miikka recognizes another lonely soul in Charli, but there’s more to it than that, something he’s never felt before. He convinces her to take a chance on him by tutoring him in English, but he really wants her to take a chance on love.
Miikka is determined to convince Charli that she's worthy of him. But even if he does, will their love be strong enough to go the distance? 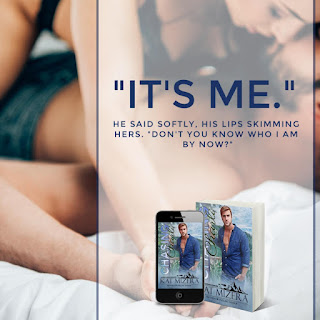 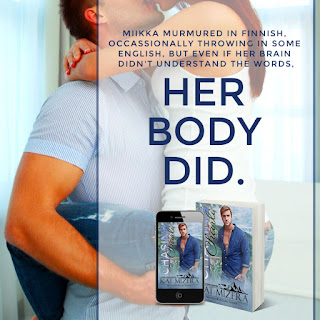 Though there was a sense of familiarity about this story I still found myself falling for these characters while their words and deeds pulled at my heartstrings.  From the first page to the last Ms. Mizera took me on a rollercoaster ride of emotions as a woman with a past full of betrayals puts her heart on the line one last time while teaching a sweet and sexy Finnish hockey player English...which soon turns to the language of love instead.

Miikka Laasonen is a delicious hero, a talented hockey player with a kind heart.  He's a true gentleman too who was recently dumped by his long distance girlfriend and is still feeling a bit lost because of it.  He's the kind of player who's focused on the game, has partaken in puck bunnies from time to time in the past, but is happy to stay in the background for the most part while doing his job on the ice.  He clearly struggles with English throughout the story and Ms. Mizera's depiction of his difficulties was realistic and utterly endearing, winning me over from the very start.  His difficulties bind him to kindergarten teacher Charlotte “Charli” Bartosiewicz early on and from there they evolve from friends to lovers as Miikka's confidence grows.  Behind his gentlemanly demeanor is a master at dirty talk, a man quite comfortable with sensuality and it made his scenes with Charli combustible.  While scorching up the pages they also had to deal with her insecurities and fears, her deep-seated pain from feeling abandoned when she needed support most.  Miikka's there for her through it all though, sexy and supportive, and quickly showed himself to be the quintessential book boyfriend in a relationship full of realistic highs and lows.

Charli Bartosiewicz desperately wants to move forward in life, but a painful past keeps holding her back from embracing happiness.  She's clearly stuck in a rut when readers first meet her, keeping to herself while closing off chances to make friends (and more) out of fear of being left alone.  Her intro to Miikka is unexpected but very fortuitous as he's just what she needs to finally move beyond her past.  Their sweet and subtle friendship put a smile on my face from the very start, allowing them to grow closer in a connection that warmed my heart before the fireworks flew in a relationship that turned super steamy.  Every step of the way saw Charli at war with herself, waffling between feeling empowered one moment and feeling unworthy the next.  My heart ached for her during those times while I cheered each time she put herself out there.  With each turn of the page Miikka was the perfect companion for her as they made each other better in a romance that shined with both tender and scorching moments.


Though this is the sixth installment in the Alaska Blizzard series it definitely stands strongly on its own with an uplifting romance full of heart and soul.  With its near-perfect hero, and a realistic heroine dealing with her own emotional baggage, readers will be glued to their journey to HEA and rooting for them every step of the way.  There's a beautiful balance of romance too, both as friends and as lovers, in this story set amidst the backdrop of hockey to keep fans of both themes happy.  Along with this entertaining main couple was an equally strong cast of secondary characters whose connections were reminders of previous stories as well as promises of what's to come in future pairings.  I enjoyed getting glimpses of Ryder and Donovan, new additions to the time, who appear to enjoy the ladies while dealing with their own uncertainties and I'm left counting down the days until their HEAs land at their feet.

USA Today Bestselling and award-winning author Kat Mizera is a South Florida native. Born in Miami Beach with a healthy dose of wanderlust, she's called Los Angeles, Long Island, upstate New York, Massachusetts, New Hampshire and Atlanta home. She's never been able to pick which locale is her favorite, but if pressed, she'd probably choose the west coast.
A typical PTA mom with a wonderful and supportive husband (Kevin) and two amazing boys (Nick and Max), Kat can usually be found scrapbooking or indulging in her second love (after writing) - traveling. Greece is one of her favorite places in the world. She loves that Athens is a big city with a small-town feel. The food, beaches and culture keep her going back as often as possible.
Kat's been a working freelance writer for nearly 30 years. She sold her first article--a review of a rock concert--for $10 in 1985. Since then she's been an entertainment journalist, waitress, bartender, legal assistant, food critic, magazine editor, substitute teacher, and sports writer. She also spent some time working at A & M Records in Los Angeles.
As you can guess from her Las Vegas Sidewinders series, Kat loves hockey and occasionally writes articles about her favorite team, the Florida Panthers. The rest of the time, she writes novels: sexy, romantic fiction that she hopes makes you as happy as it makes her. There's something enticing about hockey players and romance...