A woman, whose life was stolen by a covert government entity she once worked for, finds herself torn between the man she once loved and her desire to keep him and those close to him safe in this exhilarating paranormal romance full of unexpected twists and turns.  Keep reading to get a tempting taste of Inherent Fate ​by Alicia Anthony, then add it to your bookshelf.  In honor of this third installment in the Blood Secrets series make sure to fill out the form below for the chance to win a set of the first two books in this series in print too! 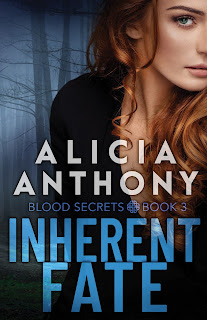 A discarded asset stripped of her identity...
An emotionally scarred ex-agent...
An innocent life hanging in the balance...
Who would you trust if the world was out to get you?
Losing Liv Sullivan in a Bureau operation gone bad turned ex-agent Ridge McCaffrey into a broken man. So when fate reunites him with the woman he thought was dead, he’ll risk anything to make her part of his life again.
Liv Sullivan returned to the States with two goals: end the FBI’s corrupt GenLink psychic intelligence program and reclaim the life it stole from her. But when the case against GenLink exposes a threat against Ridge’s son, the cost becomes too great. Refusing to destroy more lives, she leaves Ridge, and the chance to reclaim her identity, behind.
But as a new generation of GenL/ink closes in, once-trusted allies become enemies, and long-buried secrets threaten.
Can Liv and Ridge end GenLink before echoes of the past destroy their future?

CHAPTER ONE
~Liv~
Something about death makes invisibility easy. After all the years I spent trying to disappear, who knew all I needed was a death certificate issued by the very government who did everything within their power to bury me?
I gripped the porcelain around the pedestal sink, my knuckles white. The gray-toned walls of the law office bathroom squeezed in on me. ​Breathe in, breathe out​, I coached myself. ​You can do this, Olivia Sullivan​. ​You made it this far.​ ​He can’t hurt you anymore​. That was a lie.
A soft knock sounded on the ladies’ room door.
“Miss Allyn?” A man’s voice broke the silence, the same man who’d waited for me outside arrivals at Dulles International less than two hours before.
Tony Medici, as he’d introduced himself, was a tall, muscular brick wall of a man. His eyes were a muted hazel, almost gold, and he was close-shaven, his nose crooked just a bit. The result of an injury, I was sure, but too intimidated to ask. His broad back and shoulders strained the seams of his dark suit. And he looked less like a go-fer for the U.S. Attorney’s Office and more like a mob boss. When I closed my eyes now I could picture the sign clutched in one of his meaty paws, my new pseudonym printed in bold black letters–Olivia Allyn.
Tony cleared his throat from the other side of the door. “Ms. Rogers is waiting."
I swallowed hard and stared at the reflection in the mirror, wondering why the unaffected gaze of the woman in the mirror didn’t match the rabbit race of my heart.
“Thanks, Tony. Be right out.” I pushed the door open just enough for him to see a slice of my face, ensure I hadn’t ducked out the window and ran. Not that the possibility hadn’t crossed my mind in the last five minutes I’d been holed up here, but it was dark. I wasn’t familiar with D.C. And everyone I’d once known on this side of the Atlantic thought I was dead. In short, I had nowhere else to go. Besides, how far could I get before the USAO tracked me down?
I washed my hands under lukewarm water and jerked a couple paper towels from the metal dispenser on the wall. Glancing back at the reflection, I wiped away the glaze of moisture on my palms. ​You deserve a fresh start​, I reminded myself. ​Fresh doesn’t mean forgotten​, my inner critic chattered at me, the black-lettered sign surging back full-force.
Two months ago I was sitting in the back room of McGill’s Pub, two miles from my grandmother’s cabin on the shores of Lough Dan, fighting my way through dial-up internet to find an attorney willing to listen to my story. One that implicated a high-ranking Bureau official in conspiracy against his own department, his abuse of power and misuse of government assets–namely me.
Assistant U.S. Attorney, Michelle Rogers, wasn’t even on my list, but somehow, she’d found me–intercepted the email intended for one of the other prosecutors in her office. She was young, driven, and had an obvious hatred for men who used women as rungs on the ladder of power. And if Marcus Sowards’ conduct over the course of the GenLink operation didn’t fit that description perfectly, I didn’t know what did.
She’d launched an investigation into his handling of the Skylar McCaffrey rescue and by extension, the GenLink operation. The evidence I turned over, coupled with the dirt she turned up on her own, was enough to convince Bureau Director, Cristophe Hamlin, to put Sowards on administrative leave pending further investigation.
Now, she was knee deep in building a criminal case against Sowards, while the Bureau itself launched its own inquiry. And for that, she needed Liv Sullivan in the flesh. There was just one problem with that. Liv Sullivan no longer existed. It was up to Michelle Rogers to bring me back to life.
The door to the bathroom breezed inward with a ​thwap​, heels clicking across the tile floor. I tossed the paper towel in the trash between the sinks, glancing up to meet the reflection of Michelle Rogers in the mirror. Blonde hair hung at shoulder length, streaks of well-placed lowlights proof it wasn’t her natural color. Pale blue eyes locked on mine as she extended her hand in greeting.
“Michelle Rogers,” she offered. “It’s nice to finally see you in person."
I cleared my throat and smoothed travel wrinkles from my purple button-down, pulling myself up as tall as my 5’3” frame would allow before facing the lawyer and shaking her hand. “I apologize for keeping you waiting, Ms. Rogers."
Michelle smiled and shrugged, less like a lawyer and more like a friend–an observation that spiked an unanticipated blade of unease. “Please. It’s Michelle. And I expected it,” she said, retreating to the door and propping it open with the toe of her pump. “Come. We’ve got a lot to cover before we unleash Sowards’ firing squad on you.” 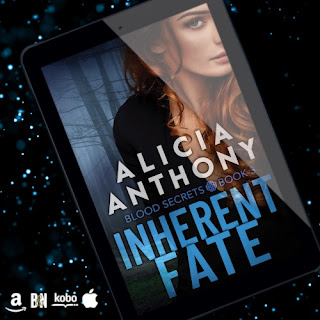 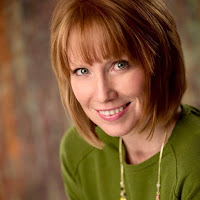 ALICIA ANTHONY​‘s first novels were illegible scribbles on the back of her truck driver father’s logbook trip tickets. Having graduated from scribbles to laptop, she now pens novels of psychological suspense in the quiet of the wee morning hours. A full-time elementary school Literacy Specialist, Alicia hopes to pass on her passion for books and writing to the students she teaches.
A two time Golden Heart® finalist and Silver Quill Award winner, Alicia finds her inspiration in exploring the dark, dusty corners of the human experience. Alicia is a graduate of Spalding University’s School of Creative & Professional Writing (MFA), Ashland University (M.Ed.) and THE Ohio State University (BA). Go Bucks! She lives in rural south-central Ohio with her amazingly patient and supportive husband, incredibly understanding teenage daughter, two dogs, three horses, a plethora of both visiting and resident barn cats, and some feral raccoons who have worn out their welcome.
When she’s not writing or teaching, Alicia loves to travel and experience new places. Connect with her online HERE. She’d love to hear from you!