Book Blitz for Shelter for Tory by Nicole Flockton (GIVEAWAY)

A woman who lives in the background finds herself forming a connection to a sexy Australian firefighter whose future is uncertain.  Keep reading to get a tempting taste of Shelter for Tory by Nicole Flockton, then add it to your bookshelf.  In honor of this first installment in the Station 7: Crew 5 series make sure to fill out the form below for the chance to win a $10 Amazon GC too! 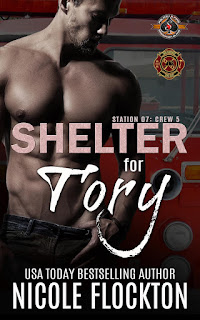 Tory Chapman wants what every girl dreams of: the love of a man who would walk through fire for her. Unfortunately, her shyness, as well as being a total brainiac are not the winning formula to find Mr. Right. But she does have a knack for locating Mr. Wrong, and this time he turns out to be a cocky firefighter with a killer Australian accent.
Shane “Mick” Hall loves working with the San Antonio Fire Dept., but with his contract ending and no signs of an extension, he has to make some big decisions. San Antonio is home to him now and the last thing he wants to do is go back to Australia. With his life up in the air, he doesn’t have time to start a serious relationship. No matter how right it feels.
Thrown together to organize a joint fundraiser, Mick and Tory spend a lot of time together. Soon they can’t deny the intense attraction burning inside of them. When trouble comes knocking at Tory’s door, Mick will do everything to keep her safe. But will it be enough?

Warm hands landed on her upper arms and she jolted. “Are you okay, doc? Did he hurt you?” A hard edge had entered Mick’s voice and she got an insight to what Quinn, Sophie and Autumn talked about how they’d melt when their men went all alpha on them. Her insides were jelly and while some of it was due to the encounter she’d just experienced. She would say it was mostly because of the man who was being her rock.
Without thinking about the consequences she wrapped her arms around him and rested her head on his chest. She breathed in deep, inhaling his scent which reminded of her wide open spaces and cool mornings. Mick’s arms tightened around her and the next instant she found herself being walked backwards as he entered her apartment, the door clicking shut behind her.
His unbound hand rubbed her back, each stroke wiping away the fear that had consumed her.
She could stay there for hours, but she could make out the sizzle and snap of oil from her pan. “Shit the sausage." Leaving the security of his embrace she rushed to her kitchen and grabbed the pan. “Damn,” she muttered. The edges of the sausage were a little black.
She sensed more than saw Mick walk up behind her. “Hey, it’s fine, I like my food a little crispy. The guys are always giving me a hard time when I always crisp up my waffle fries."
“What?” Tory turned and bumped her nose against Mick’s, he was standing that close to her. Again, acting so out of character she pressed her lips against his. The need to be connected to him ripped through her faster than bullet. The way their bodies were aligned was awkward, so she twisted, that her front was brushed up against his. Her hands clutched his shirt, as if she didn’t want to let him go and right now she didn’t. She wanted his kiss more than she’d wanted anything else in a long time—maybe ever.
She moaned when he trailed kisses along her jawline until he reached her ear lobe and sucked the small piece of flesh in his mouth. God, who knew her ear was so sensitive? None of the other guys she’d been with had taken time to know what turned her on. Desire flared between her legs and she pressed her thighs together in an attempt to relieve the pressure. It only made it worse.
What was happening between her and Mick was insane. Scary. 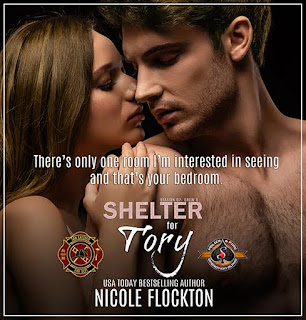 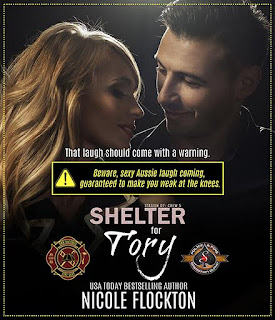 USA Today Bestselling author Nicole Flockton writes sexy contemporary romances, seducing you one kiss at a time as you turn the pages. Nicole likes nothing better than taking characters and creating unique situations where they fight to find their true love.
On her first school report her teacher noted "Nicole likes to tell her own stories". It wasn’t until after the birth of her first child and after having fun on a romance community forum that she finally decided to take the plunge and write a book.
Apart from writing Nicole is busy looking after her very own hero – her wonderfully supportive husband, and two fabulous kids. She also enjoys watching sports and, of course, reading.