Readers will find themselves quickly captivated by this action-packed read that brings together two people looking for an artifact while along the way their hearts slowly become the one treasure they can't do without.  Keep reading to get a tempting taste of Heaven by Bobbi Smith, then learn even more about this book by visiting the other sites hosting this tour.  In honor of this exhilarating historical romance make sure to fill out the form below for the chance to win a $10 bookstore GC too! 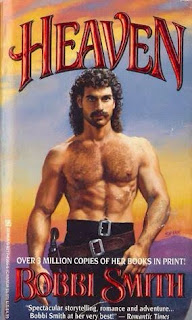 A MESSAGE FROM THE AUTHOR:
Hi everybody!
I just wanted to tell you a little about the story behind Heaven. When it first came out, I was honored to have David Alan Johnson, the very first Romantic Times Cover Model winner, as my hero on the cover! What fun! David and I did book tours together and had a great time meeting all our fans. I’m including a picture of David’s cover for our blog tour. Hope you enjoy Heaven!
Best, Bobbi Smith 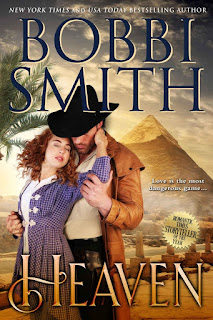 For archeologist’s daughter Alexandra Parker, the Crown of Desire isn’t just a priceless and mysterious artifact—it could mean the difference between life and death.
And to find it, she must embark on a dangerous journey in the company of a man she hardly trusts. Wealthy Englishman Winn Bradford is seductive, charismatic, and the last person she should fall in love with. But Alex, too, has a secret—one that puts Winn’s safety at risk, and will force her to choose between loyalty and an extraordinary love...

Winn knew Alex would be angry when he told her the truth, but it would be easier to face her anger than to let her continue to believe that she had tempted him from his vows. He made his way toward her cabin and found her standing at the rail, gazing across the river.
“Alex..."
Alex had been lost in a dream of Father Winn, reliving that one precious moment when they’d been just a man and a woman with nothing to keep them apart. She gasped as she recognized his voice and seeing him again set her heart racing.
“What do you want?"
“We need to talk. Please, invite me in.” “All right."
Winn followed her inside her cabin and waited as she closed the door. “Alex, there’s something I have to tell you."
“No, Father Winn, please...I shouldn’t have kissed you. It’s just that...I care about you deeply. So as far as I’m concerned our kiss never happened."
Winn gazed down at her, wondering how he’d gotten himself into such a mess. “Alex, I should have told you this long ago, but until tonight it was impossible."
“I don’t understand."
“I came to you tonight dressed this way for a reason. As you can see, I’m not wearing a collar anymore."
She was shocked. “You can’t forsake your vows!"
“Alex,” he said softly. “I’ve taken no vows."
“What?"
“I’m not a priest. My uncle, Edward Bradford, was the priest. I’m Winston Bradford. I couldn’t live with the lie any longer or with the pain I was causing you."
He reached for her and drew her to him, his lips capturing hers in a slow, tantalizing kiss.

After working as a department manager for Famous-Barr, and briefly as a clerk at a bookstore, Bobbi gave up on career security and began writing. She sold her first book to Zebra in 1982. Since then, Bobbi has written over 40 books and 6 novellas. To date, there are more than five million copies of her novels in print. She has been awarded the prestigious Romantic Times Storyteller Award and two Career Achievement Awards. Her books have appeared on the New York Times Best Seller List, the USA Today Best Seller List and the Wal-Mart Best Seller List.
The rights to Ms. Smith’s books have been sold to China, France, Germany, India, Israel, Russia and Sweden. Bobbi has also written two faith-based contemporary novels – Haven and Miracles – using the pseudonym Julie Marshall.  Visit Ms. Smith at her website HERE.