Book Review for The Brothers' Band by Liza Malloy... 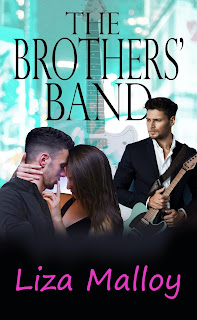 Lily Mitchell vowed never to date another musician, but Dylan Parker is nothing like the stereotype. Sure, he’s mysterious and sexy, with a flashy car and serious bedroom skills, but he’s also smart, hardworking, and humble. He shares Lily’s passion for classic literature and constantly surprises her with romantic gestures. Their steamy relationship moves at whirlwind pace, and Lily has never been happier.
It’s all so perfect that at first, Lily wills herself to ignore the emerging red flags. As her worries about Dylan increase, she finds friendship and comfort in his brother and bandmate, Thomas. But Lily soon discovers that as much as Thomas cares for his brother, he’s also fallen hard for her.
As Dylan spirals further out of control, Lily must decide what she really wants, and whom she is willing to hurt.

As a fan of rockstar romances I was immediately drawn to this tale of two brothers whose journey to the top of the music charts takes an unexpected turn when a young woman comes into their lives and their hearts.  I was left conflicted throughout the story though, had moments where I liked the main characters before starting to detest them.  The only character that remained consistent in my view of him was Thomas, a kind and supportive brother who was painfully betrayed by a brother he always made excuses for.

Dylan Parker is a sexy and charming British rocker who, from the moment he sees Lily, takes her on a whirlwind romance where he indulges every one of her desires.  It's a fun time for them, a time that leads to a proposal, and time to ignore reality.  When Dylan's with Lily he's a knight in shining armor, but behind the sweet facade is a young man weighed down by demons.  His playboy ways slowly come creeping back as does his dangerous drug addiction, an addiction that everyone tries to keep secret.  Once this issue emerged Ms Malloy dealt with it vividly and realistically, the pain his choices have on others is more than obvious, and is part of why I came to hate him.  I too was charmed by him at the start but with each turn of the page his manipulations took over his personality.  He came to use Lily as an excuse and a distraction, making her feel guilty for his decisions in a relationship that became a bit toxic by the end.

Lily Mitchell is the proverbial good girl, so she's shocked when rockstar Dylan turns up the heat to win her over.  From the start he seems like pure perfection, showing a tender side while sweeping her off her feet.  She quickly falls for him though and is ready to spend the rest of her life with him, until cracks in their once sturdy foundation start to form.  At first she can forgive and forget his indiscretions and occasional drug use, but before long it becomes too much.  When a single moment causes her life to change dramatically she'll be forced into making a choice that turns the storyline upside down...and left me with a bad taste in my mouth.  Lily starts off rather immature, just enjoying the picture perfect life she's experiencing with Dylan.  She's a bit naive as well when it comes to sex which Dylan employs to distract her when he knows he's done wrong.  Through most of the story she's an enabler, accepting his excuses and taking the blame.  I lost respect for her, but when a tough decision had to be made she finally took a stand to do what was best for her.

Through all Lily's ups and downs with Dylan, there was always Thomas in the background.  He's the strong yet silent older brother who keeps their band going no matter what chaos Dylan causes.  He's not blind to his brother's faults though, and all along tries to protect Lily from the pain Dylan casually causes others.  As Dylan becomes more self-destructive, Lily and Thomas grow closer together...first as friends before one night changes everything for them.  That one moment sets up this story for an ending that had me wanting to slug Dylan and unfortunately revealed all you need to know about him and his vindictive nature.  Thomas was the one truly likable character in this book, protective towards his brother and Lily, and willing to sacrifice his happiness for Dylan and what he sees as honorable.

Dylan's actions late in the story shows how unappreciative he is of Thomas and was a gut-punch to the older brother and readers, creating a wall between the brothers that will change the storyline for the future.  That's of course dependent on Ms. Malloy as there's a definite unfinished quality to this story.  After the emotional bomb is dropped things are left up in the air...particularly for Thomas and what he discovers.  As much as this book angered me at times I still kept turning the pages and long to see where life goes for Thomas now that he has the chance to have his own HEA.  When it comes to Dylan though, I'm over him.  Any charm and romanticism surrounding him was tainted by his hurtful and vindictive nature and I'd be fine not seeing him again.  Lily grew as a character thankfully, fate saw to that though as she had to mature to make the right decisions after all that happened before.  There's a sense of peace around her by the end and with the chance presented to her I'd love to see where things go now that the truth's been revealed.  Rockstar romances are my catnip, and though I had LOTS of problems with this one, I'm still happy I took a chance on it.  I appreciated the vivid and brutal depiction of addiction, I enjoyed the early romance between Dylan and Lily before everything went wrong, and then there was Thomas.  He was the one truly good character in this story, sacrificed so much for his ungrateful younger brother, and still deserves a HEA...so let's hope it happens in a future story.

*I got this book from the author for review in exchange for my honest opinion.
at July 05, 2020