Book Blast for The Ultimate Betrayal by Kat Martin (GIVEAWAY)

A woman trying to prove her deceased father's innocence finds herself relying on her brother's best friend as his guarding her body soon turns romantic in this sensual and suspenseful tale.  Keep reading to get a tempting taste of The Ultimate Betrayal by Kat Martin, then discover even more about this book by visiting the other sites hosting this tour.  In honor of this third installment in the Maximum Security series make sure to fill out the form below for the chance to win a $25 bookstore GC too! 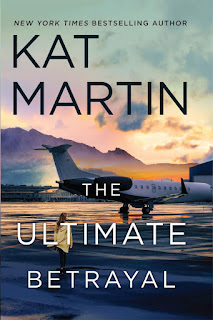 To prove her father’s innocent of treason, she’ll have to face a killer--and risk everything...
When journalist Jessie Kegan’s father is accused of espionage and treason, Jessie has no doubt the man she looked up to her entire life is innocent. Worse yet, before Colonel Kegan can stand trial, he’s found dead of a heart attack...but Jessie knows it was murder. Forcing down her grief, she’s determined to use her investigative skills and resources to clear her father’s name. But going after the truth means Jessie soon finds herself in the crosshairs of a killer who wants that truth to stay buried with her father.
Protecting Jessie Kegan is a job bodyguard Brandon Garrett can’t refuse. Jessie isn’t just a client at Maximum Security—she’s the sister of his best friend, Danny, killed in Afghanistan. With dangerous forces gunning for Jessie from every angle, keeping her safe will mean keeping her close and Bran finds their mutual attraction growing, though being Danny’s sister puts Jessie out of bounds.
With their backs against the wall, Jessie and Bran will have to risk everything to expose her father’s killer—before his legacy dies with his daughter.

Bran leaned back in his chair, his gaze fixed on her face. “So...no husband. No serious boyfriend, either?"
“No. Listen, if you’re finished with the third degree, I’m going to bed. It’s been a rough day."
His gaze sharpened. “Sorry,” he said, not looking sorry at all and even more curious than before--unfortunately. “I’ll see you in the morning."
“What time?” she managed to ask calmly.
“We leave at six."
“I’ll be ready. Good night, Bran. And thanks again. I really appreciate your help."
Bran casually nodded, but his beautiful blue eyes never strayed as she turned and walked away. She shouldn’t have let his questions get to her. It was a dead giveaway to a guy as smart as Brandon that there was more to the story than she was willing to tell.
Far more.
She thought of the man whose brutality had changed her life. Jordan Duran, Jordy, the man who was currently serving a ten-year prison sentence. She didn’t like to think about him. She refused to let him control any more of her life than he already had. As she had learned to do, she pushed his image from her mind and just thanked God she was still alive.
Yawning, she packed up the computer so she would be ready to travel in the morning and headed to bed. After the drama of the day--being followed from the airport, shot at, meeting Brandon Garrett and his friends, and escaping a possible tail, she should have been exhausted, and she was. Still, she couldn’t seem to fall asleep.
Every time she started to drift away, she saw Bran’s perceptive blue eyes and wondered what he thought of her. Wondered if he found her attractive. It had been months since she had been interested in a man. After Jordy, none of her attempts at a normal relationship had worked out and eventually she had just given up.
But Bran intrigued her. Both his physical beauty and his mind. She also knew that getting involved with Bran on a personal level was a terrible idea. He was exactly the heartbreaker Danny had warned her about. He was also ex-military, an adrenaline junkie who loved to be in the middle of the action. Guys like that never changed. Just as before, her judgment sucked.

New York Times bestselling author Kat Martin is a graduate of the University of California at Santa Barbara where she majored in Anthropology and also studied History. Currently residing in Missoula, Montana with her Western-author husband, L. J. Martin, Kat has written sixty-five Historical and Contemporary Romantic Suspense novels. More than sixteen million copies of her books are in print and she has been published in twenty foreign countries. Kat is currently at work on her next Romantic Suspense.