Review for Any Man of Mine by Rachel Gibson 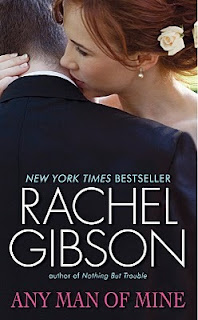 Autumn Haven has made a nice life for herself and her young son after being left the morning after her quickie Las Vegas wedding to womanizer, and star hockey player, Sam LeClaire.  She thought she had put all the anger and hurt behind her for the sake of her son, but a chance meeting with Sam at the wedding she's in charge of sets them on a new road that she never dreamed possible.  A weekend away with the boys on the anniversary of his sister's death was just what Sam needed to deal with the sadness.  An encounter with an intriguing redhead amongst a sea of nameless women caught him off guard and lead to an act of spontaneity.  His reaction the morning after is one he's felt guilty about for years, but a chance meeting with Autumn gives him the opportunity to make amends.  Will Autumn give him a chance to be the father and husband he now truly wants to be or will old hurts and doubts resurface to keep them apart?

Rachel Gibson's Chinook hockey series just keeps getting better and better!  Each player is unique with their own emotional baggage and oodles of sexiness.  The scenes involving hockey flow beautifully with the storyline and are not overly technical.  They add to the storyline and are enjoyable even to a hockey novice like myself.  The characters are incredibly likable and their feelings regarding the past are believable and totally understandable.  Autumn's a strong woman who's made ends meet on her own terms and not relied on Sam beyond the basics, which makes her admirable to the reader.  She spent years wallowing in anger and betrayal over Sam's actions and his parade of women, but that's not to say she doesn't still find Sam attractive.  She's honest enough to admit the attraction, but doubts his ability to stay for the long term.  Every moment she keeps expecting him to get bored and leave them again and I ached for her having those thoughts in her head all the time.  Her fears are understandable given his history and all the years of her relying only on herself make her hesitancy forgivable.  Sam's a hard man to ignore though and his slow and steady course of winning her back is sweet and sexy and I can understand her caving in.  He had a lot of sadness and guilt that he was dealing with by partying and womanizing when he first met Autumn.  He saw in her someone to save him and heal his pain, but fear of the future led him to make a juvenile decision.  He admits he was cruel and he's embarrassed by what he did.  He's grown up emotionally and is striving to be a better man and father.  I admire his honesty and applaud his finally growing up and shedding his playboy lifestyle.  It's sexy seeing a grown-up Sam.  I also enjoyed his humor and seeing the interactions with his son in trying to win Autumn back.  The fatherly displays definitely add to his sexiness.

Adding to the enjoyment of this book is a set of wonderfully entertaining secondary characters.  The verbal sparring between Autumn's brother Vince and Sam results in some very funny scenes.  The mystery surrounding Vince's career also has me very intrigued and clamoring to read more about him.  Sam and Autumn's son Connor is also enjoyable.  Too many times children can weigh a story down.  Sometimes their speech and actions don't jibe with their age.  But I'm happy to say that Connor is a delightful child.  His speech and thoughts are age appropriate and the schemes he and Sam use to win over Autumn bring humor to the story.  Sam's hockey teammates are a very sexy and colorful bunch too and each one of them deserves a story of their own.

Ms. Gibson's written a wonderful story about the power of forgiveness.  The dialogue is witty with characters that are like family.  The sex is steamy with scenes perfectly placed throughout the story.  This book was a truly satisfying read and I look forward to many more stories in this incredibly winning series.


My rating for this is A+
*I received this from NetGalley for reviewing purposes.