Review for The Pleasure Garden anthology 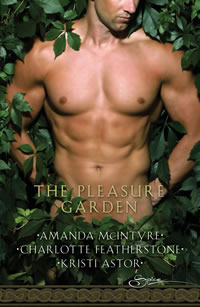 The Pleasure Garden is an intriguing anthology with three stories from different time periods, but all revolving around the myth of the Winter Queen and her forbidden love for the Green Man which ends in tragedy.  The cuckolded King sees the Green Man turned to stone which leads the Queen to kill herself.  While the two lovers were together the garden bloomed, but upon the loss of their love the garden dies.  To bring the curse to an end, the Green Man must bring three lovers together which will allow him to join his true love.

The first story is Sacred Vows by Amanda McIntyre and involves Gaelic lass Cara falling suddenly in love with Edmund, who's soon to take his religious vows.  Their love is forbidden by law, but he swears to come back by morning and marry her.  Lies perpetuated by his supposed best friend lead Edmund to being forced to take his vows or face treason.  Cara's life too takes an unhappy turn and a marriage proposal she believes to be her saving grace soon turns dangerous and she must put her faith in Edmund one last time to save her family.  Will he abandon her again when she needs him most or will he come through this time and finally become the family he once promised.

This is a very emotional story where the heroine goes through many more hardships than the hero.  Cara gets left behind to pay the price of their transgression.  She deals with it in a mature manner and with a strength in character.  She's the more realistic of the two when it comes to society's hatred and the consequences of that and deals with it as best she can.  Edmund's lived a sheltered life and is very naive to the badness in people and it led him to trusting the wrong people and ruined not only his life, but others too.  I found him to be weak and a tad unlikable for his weakness.  Cara definitely deserved better after everything she went through.  The villain of this story is definitely worthy of the title and I was wholeheartedly rooting for him to get his comeuppance.  The ending was a bit forced and not the most fulfilling in my opinion, but again that's mostly due to my disappointment in Edmund's character.  My rating for this story is a B.

The second story is Perfumed Pleasures by Charlotte Featherstone and involves injured soldier Joscelyn Mallory who returns home from war burned and blind in one eye.  The only thing that got him through the pain of his recovery were images of his one true love Catherine Tate, who happens to be betrothed to his cousin Edward.  Edward is lecherous and cruel and sees Catherine as a possession he bought since he owns all her father's gambling vows.  Joscelyn loves her though and doesn't want her pity so he renews their love in darkness at first.  She's soon forced to choose between her happiness or the protection of her family, when an unlikely savior gives Joscelyn the key to assuring his and Catherine's happiness if she just believes in him.

This was my favorite story of all of them.  It revolves around my favorite storyline of Beauty and the Beast and has a scarred but very sexy hero who I immediately fell in love with after all the hardships he'd been through.  He's a wonderfully well-written character.  Catherine is a likable character put into a seemingly inescapable situation, which was unfortunately all too common for women in that time.  They were bought and sold.  I admired her moments of defiance against Edward, a truly vile villain who knew he was a lesser man than Joscelyn.  Catherine and Joscelyn were a truly romantic couple whose romantic interludes were extremely steamy.  I was rooting for them every step of the way and will re-read this story every chance I get.  My rating for this is an A.

The final story is Rites of Passion by Kristi Astor and focuses on war widow Emmaline Gage as she adjusts to living in the home she believes her husband's family has bequeathed to her.  She believes there are spirits associated with the home's garden and those spirits lead her to feeling amorous whenever she's in the garden.  The night of the May Day bonfire soon brings a new man into her life.  The man is Jack Wainscott and he's come to inform her that his side of the family actually owns the house and she must leave.  But after dropping that bombshell he becomes extremely ill and she's forced into nursing him back to health when the two of them are quarantined out of fear of his illness spreading.  During Jack's recovery, romance blooms between him and Emmaline and while he's thinking of a future for them together, she's scared to give her heart away again.  She doesn't think their love is real since it came about so quickly, nor does she think she's mourned her dead husband long enough.  As their relationship has ups-and-downs so too does the garden.  When her and Jack are together it blossoms, but when he leaves the garden dies out again.  Will Emmaline finally swallow her pride and take a chance on love again?

This was an enjoyable story featuring two people damaged by events during the war which forms a strong bond between the two of them.  Emmaline's feelings regarding her dead husband are understandable and I love Jack for giving her the space she needed to discover what she really wanted.  She's a strong woman and no matter what will always land on her feet.  Jack was playful and sexy and the perfect prescription to bring happiness back to Emmaline's life.  Their sexual encounters were sexy, and in regards to their scenes in the garden, rather unexpected.  I liked how this final story brought in the original myth and gave blatant examples of the lover's affects on the garden.  It was a nice way to wrap things up and did bring a definitive conclusion to the Green Man and his lost love.  My rating for this is a B+.

On a whole this was a very good anthology.  All the stories were well-written with mostly likable characters and I definitely recommend you reading it.
In its entirety I give The Pleasure Garden a B+.
*I received this from NetGalley for reviewing purposes.