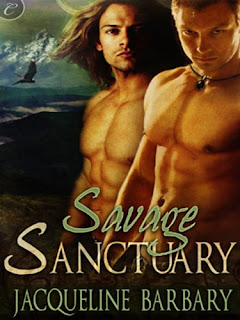 This is a very quick paranormal read that focuses on the world of shifters, those protecting them, and those who experimented on them and hunt them still.  This particular book is of the m/m genre and focuses on Robert Hamilton-Scott who has opened up his home as a sanctuary for those shifters hiding from the government.  He's a part of the resistance, a quiet part though since he's a shifter himself.  He dyes his hair since shifters have very distinctive hair coloring and keeps to himself out of fear of being discovered.  It's a quiet life until the day the resistance brings Michael O'Dare to recover at Robert's mansion.  He was experimented on by the government and forced to shift which has now left him more animal-like than human.  Robert sees the man inside though and helps him learn to be Centered like him so he regains his humanity.  There's still many obstacles to overcome in their relationship with many dangerous moments when the resistance goes against the government to free more shifters and hidden truths come out in the open.

Since this story was so short the emotional connection between Michael and Robert felt a bit rushed and a tad superficial at first.  It had the feel of love-at-first-sight which makes you question the longevity of their relationship, but the two of them go through so many life-threatening and highly emotional incidents that their bond does become a bit more believable.  And they both bring very unique qualities, unique life views, to their relationship that again made their bond realistic.  Michael clearly was the more experienced of the two, but he never made Robert feel naive nor did he act overtly dominant in their sexual relationship.  The sexual interludes between the two were nicely written and did not take over the story.  I liked seeing them as a couple, but wish more time could have been invested in developing their relationship.

Another casualty due to the shortness of the story was the world-building.  I'm definitely intrigued by these shifters, but I wanted to have a clearer image of the shifter's lives and the government's reasons for harming them.  It's a world that is interesting with a lot of possibilities that I'd like to see the author expand upon.

This story wasn't perfect, but it's a good start that if the author continues to write about will definitely have me as a reader.  This book would have gotten a higher rating from me had things been expanded upon, but the shortness of it made me feel cheated.  I wanted to know more and feel more invested in this couple's relationship but the shortness of the story didn't allow for that.  Given a longer book length I feel this author can create a very good book since this story was a nice start.