Review for Consent To The Cowboy by Abby Wood 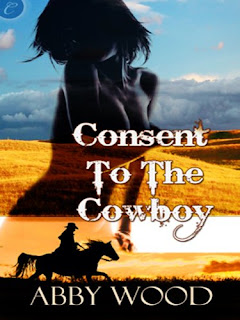 Daphne Norris is a hard-workin' barmaid who wants more than a one-night stand cowboy.  Luckily for her, Will Hanson lands at her feet and is soon proposing a relationship way more intense than just one night.  He's been looking for just the right woman to be the other half of his Dom/Sub coupling and he thinks Daphne would be the perfect Sub.  After a weekend of intense interaction, Will and Daphne are soon very ingrained in each other's lives.  She takes to the roll of Sub wholeheartedly and Will is definitely cut out to be the Dom.  He has a say in every aspect of Daphne's life and she is very comfortable letting him make all the decisions.  Before long misunderstandings erupt and it takes an unexpected individual to bring the lovers back together.

I've read many stories based on this kind of lifestyle and still can't quite understand the appeal of it.  That is not to say that it affects my enjoyment of the story.  When the characters are likable, I will wholeheartedly buy into the relationship no matter how I feel about it personally.  Unfortunately for this story, I found the characters to be rather unlikable with a connection that didn't feel as though it was based on love.  Will is extremely dominant, both in and out of the bedroom, and it gave the impression of being a father figure to Daphne who already has daddy issues.  He wanted to change everything about her from her clothes to working only on his farm.  I don't feel as though a strong relationship can be formed when you're being molded into someone completely different by someone else.  I found Daphne to be even more unlikable because of the immature attitude and actions she constantly displayed.  From appearing scared of a sexual position one minute to jumping in wholeheartedly the next, to running scared screaming like a child from farm animals, it was one childish action after another.

My negative reactions to the main characters greatly reduced my enjoyment of this story.  The sexual interludes were hot, but I never bought into this couple's relationship.  The love of your life should bring out things in you, not suppress you and who you are.  After the final page and after much deliberation, I'm left very unsatisfied and disappointed by this story.  With stronger and more likable characters, a much better story could have emerged, but as it is I just can't fully recommend this story.

My rating for this is a D+.