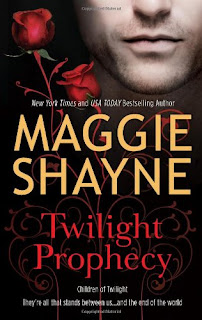 This is the 17th book in the Wings of the Night series and focuses on the part-vampire/part-human twins Brigit and James Poe who are the children of a previous book's couple and their unique abilities to give or take life.  For many years James has tried to run from the vampire side of himself while his sister has embraced her existence and gotten stronger.  James acts more like a human except for those times when he's healing terminally-ill children.  Until the day his sister informs him that the existence of their kind is in jeopardy and only the two of them can stop the extinction of their race.  With the reluctant help of Professor Lucy Lanfair, whose job is to decipher the ancient clay tablets foretelling the prophecy, James get drawn into a battle with an ending based on lies and with the love of his life getting caught in the crossfire.

This is the continuation of Maggie Shayne's popular vampire series and the storyline is full of characters from previous books.  In my opinion it's not an absolute necessity that you've read the previous books since the author quickly brings you up-to-date, but it will help in keeping track of who's who and the intricate family lineages if you have read them.  I HAVE read them all and even I had trouble recalling all the characters.

The vampire twins are exact opposites in their abilities and feelings towards mortals.  James sees their goodness and lives among them while Brigit embraces her vampire side by imbibing blood and has no need for mortals.  Due to mortals' reactions to learning of the vampire's existence though, the two of them are forced into doing things they never thought they'd have to do and in the process start seeing others differently.  James has always wanted to discover the purpose for his abilities and is excited by what he believes the prophecy to be and that he'll be the hero.  Brigit's always been the bad seed and doesn't see that changing with the prophecy.  She's a strong heroine who takes charge and is very likable no matter her negative feelings towards mortals.  No matter their differences though they have a strong bond and the two of them are the best parts of the story.

For James, being the hero is important.  Whereas Lucy has always seen herself as a coward from her early childhood when she hid and was the lone survivor of her parent's deadly archaeological dig.  She at first doesn't want to become involved in the vampire's fight and irritatingly is constantly asking to go home.  Even though she's slowly becoming more attracted to James she still doesn't want to be with vampires.  For a large part of the story she believes what the government bad guys, the DPI, say about the vampires.  The romance between her and James doesn't even make any headway until way over halfway through the book.  Because of this, I don't find their romance believable.  Since she has the belladonna antigen in her blood that draws vampires into protecting her, it almost felt like that was more of an affect to their relationship than anything else.  Because I didn't see much growth in her character until the very end I didn't see why he'd be drawn to her otherwise.  With their stagnant relationship this causes certain parts of the story to drag.  The middle part of the book felt especially boring and a bit like filler.

The end of the story definitely picks up momentum as truths come out and the vampire's lives become more imperiled.  The plan involving their supposed savior turns heroes into villains and villains into heroes and ends on a cliffhanger.  And even though this story was a bit lacking in the romance department and has a few unnecessary chapters, I'm still intrigued enough to want to read the next installment in this intriguing take on the vampire world.  With an exciting cliffhanger and the possibility of Brigit being the heroine of the next book, and a very intriguing and confused man introduced in this book as her possible love interest, I'm definitely on board for the next book in the series.


My rating for this is a B/B-
*I received this from NetGalley for reviewing purposes.