Review for With a Twist by Heather Peters 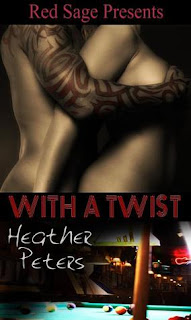 Ava Denotti thinks her 40th birthday is going to end with just her and a round of drinks celebrating.  But a man from her past comes back into the picture to give her a night she won't soon forget.  She thinks it's a one-night occurrence though since Shane Sullivan isn't the kind of man she thinks would be attracted to her for the long-term.  After all, she's a vastly older woman with a few extra pounds she'd like to forget about and Shane is 13 years younger with tats, a piercing, and a desire to be in control during their romantic interludes.  Just when they start forming a connection that looks to be of the forever kind, will insecurities and self-doubts pull them apart or will they decide that love is love no matter your age?
This is a fun and sexy read with two very likable characters who have been hurt by love.  Ava's husband left her for a younger woman and that younger woman just happened to be Shane's fiancee.  Both of them were thrown away by people they thought they loved and made to feel lacking which is a strong basis for them to form a relationship.  They both saw only good things in each other and were made to feel more confident in each other's presence.  They'd both just been going through the motions of living until they reconnected and now they've found happiness.

Ava is a woman you can easily relate to with the same insecurities and yet she can be bold too.  She's the owner of a bar with her brother and says what she thinks.  She's a very modern woman and that is easy to admire.  Shane is charming and adventurous and treats Ava like she's the best thing he's ever had in his life.  It's very romantic watching him try to win Ava over and his encounter with their mutual exes brings out the fighter in him that had me rooting for him.  He's the quintessential hero and sexy to boot.

These two do have a small misunderstanding that thankfully doesn't get dragged out.  At the same time, the overall story feels a bit rushed.  These two get together rather quickly and I have to say that I would have enjoyed seeing Shane woo her for a bit longer since he's so good at it.  One thing not lacking is definitely the sexual interludes.  They're steamy, inventive, and take up a lot of the storyline.  In a lot of ways that's a good thing since the scenes were very sexy and showed their intense connection, but it also would have been nice to see them interacting in public to see a different side to their relationship.  This is again a time when word count affects storyline.  I very much liked this story, but it could've been even better with more time being spent on their relationship.  I also want to mention the two secondary characters of Elena, the bartender and Ava's brother AJ.  There's a bit of unrequited love on Elena's part hinted at and considering how much I liked what I saw of AJ, I'd love to read a story revolving around the two of them.  Ms. Peters writes a sexy story in a straightforward way and I would definitely read more from her in the future.

My rating for this is a B.
*I received this from NetGalley for reviewing purposes.