Review for Her Heart's Divide by Kathleen Dienne 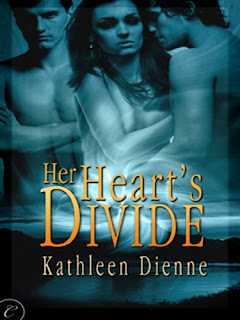 This is a very intriguing threesome story with a sci-fi twist.  The story involves married couple Ryan and Lila and their mutual boss Jack, who Lila was once attracted to, and asks the question "What if one moment went differently and what would be the effect?".  After an abrupt start to the story, Jack comes home after having a car accident, to see his wife and is shocked by what he discovers.  For the home he comes to isn't his and the wife waiting is Lila, who Jack discovers has been married to Ryan for seven years.  Everyone thinks his memory issues are because of the car accident but he's adamant about the life he and Lila created which started at a Christmas work party where he says they hooked up and she says nothing happened.  It gets Lila thinking about what might have been and after catching Jack watching her and Ryan during romantic interludes she's even more conflicted about the attraction and excitement she feels towards Jack.  Jack's wife Allison, the one Ryan and Lila know, soon arrives from her spiritual retreat to explain what happened and tells them how to put things right which leaves them 24 hours to give into the attraction they feel and discover "what if".

This story poses an intriguing hypothesis and I admire the creativity of the author for coming up with a storyline that's new to me.  This is a quick read with a few very steamy interludes that started rather abruptly and ended a bit abruptly as well.  I found the characters enjoyable with only a bit of irritation towards Ryan who didn't seem at all skeptical of Jack's story.  He easily accepted the idea of alternate realities and encouraged Lila to indulge in a threesome since he could tell how excited the idea made her.  I don't think most people would believe so easily or be that accepting of sharing your wife with your boss.  Allison too is an odd character who believes in magic and healing spells and through her doubts about Jack's love for her caused all this to happen.  We barely see her and her character is very much on the periphery.  Since I liked the idea of this story so much I'd actually like to see a sequel from the alternate reality version of Allison.  I'd like to get to know her character more fully and discover if she found the answers she sought by enacting her spell.

Jack and Lila are the most intriguing and display the most realistic emotions.  They're both freaked out by what's happened and the story is really about them and their "what if".  There's also another question being asked that if you knew there would be no guilt or recriminations would you give into your fantasy.  It's yet another interesting hypothesis in this thought-provoking and sexy story.  This was a very enjoyable read and the author did a very good job at balancing the science fiction and romance of the storyline and I'm excited by what this author next publishes.

My rating for this is a A-