Review for A Ranger's Tale by Mysti Parker

In preparation for my special guest author and giveaway tomorrow, I had the opportunity to read Mysti Parker's new book.  Below is my review, and please come back tomorrow for your chance to win a digital copy of this entertaining read. 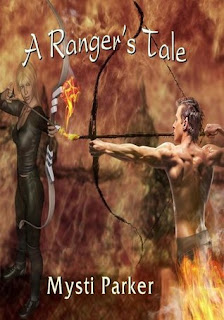 This is a highly emotional story based in the world of magic and mystical creatures that puts you through the wringer and leaves you exhausted after turning the final page.  For full-elf Caliphany Arenea, being the daughter and only child of a renown mage hasn't been easy.  Since the death of her brother she's been groomed to become the next leader of the Mage Academy except that's not what she wants.  She longs for adventure and seeing the world past her city gates.  She makes a deal with half-elf Galadin Trudeux, a Ranger and former pirate, to teach her to take care of herself in the wild and soon long days lead to a romance being kindled.  Upon discovering her training her father's ultimatum leads to the biggest decision of her life that brings excitement and sorrow to her and a story that's both enjoyable and tear-inducing to the reader.

The world that Ms. Parker creates is full of exotic creatures like elves, trolls, and goblins and each brings extra excitement to the story.  The use of magic ups the action and keeps you on the edge of your seat.  The scenes involving its use leave your heart pounding.  Each of the creatures in this world are unique and even though the story has lots of characters they're easy to remember because of their vivid descriptions.

Caliphany starts out as somewhat of a spoiled rich girl, but her father hasn't encouraged her to be any other way.  It's only through her time with Galadin that a strong woman starts to emerge and a true heroine is created.  As she goes out into the world she becomes more self-confident and she finally starts gaining control of her magic.  Cali is put through the emotional wringer as the story progresses and it's only through the support of friends, both male and female, that help her continue on.  I truly believe that the Cali at the start of the story wouldn't have survived these truly sad events and it's only because of the inner strength Galadin roused in her later on in the story that kept her going.

Galadin's had the exact opposite kind of youth than what Cali experienced.  He saw his parents die and was forced into piracy and he carries a lot of guilt around for deeds he was forced into doing.  He had to grow up way too fast.  He understood Cali's need to make it on her own since it was the same for him.  They brought out the best in each other and are the perfect match no matter what obstacles get in their way.

The secondary characters are intriguing and any of them would be worthy of their own story.  As a matter-of-fact one of them, Jayden Ravenwing, will be the hero in the next installment of this series.  After all the heartache he went through in this story in the name of love he deserves some happiness.  The villains in this story also added to the excitement of the story.  You never knew if they'd return to cause problems or even who the exact villain was.  It adds a feeling of uncertainty that keeps you invested in the story since every time Cali seems happy something bad happens to her.

This is an exciting world full of action and likable characters and a great start to a new series.  When you're not cheering for true love to win, you're crying over the obstacles impeding true love.  I'm excited to visit these characters again and will definitely pick up the next book in the series and recommend this book to get your first taste of this magical world.