Review for Changing the Game by Jaci Burton 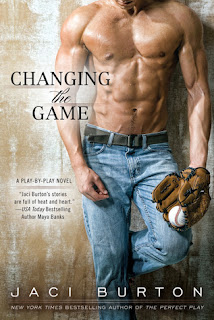 Gavin Riley is a star in the world of baseball with a lucrative contract and gorgeous females vying for his attention.  But after an unexpected kiss from his agent Elizabeth Darnell he decides to mix a little pleasure with his business and spend his preseason finding out what Liz wears under her straight-laced business suits.  For Elizabeth their arrangement is a dream come true since she's been in love with him for years.  But the fun soon becomes something serious and when old family hurts resurface to put their newfound relationship in jeopardy will their love be strong enough to overcome the interference or will they strike out?

This is the second book in the Play by Play series featuring the Riley family and is a fun and sexy read from start to finish.  Jaci Burton has created another gorgeous athlete with a smoldering body whose words leave you weak in the knees.  Gavin could easily be arrogant considering his talent but he's totally charming.  It's easy to see why the ladies fall for him.  And once he and Elizabeth start their preseason fling his sexiness is amped up even more with some very combustible sexual encounters.

Elizabeth Darnell has been in love with Gavin for years but her dedication to her job kept her from stepping over the line of propriety.  After her interference in his brother's love life in the previous book in this series, she especially wants to keep business and pleasure separate because of the pain she caused.  Becoming involved with Gavin goes against not only her business rules but also against her personal ones as she learned by watching her mother be ruled by her demanding father.  Love is for fools and only makes you weak and in the predominantly male business she's in she can't afford to be seen as weak.  It's inevitable though that they get together after many scorching looks across a crowded room.

Liz and Gavin's sexual interludes are hot yet funny, the two of them have witty banter between and out of the sheets and it's enjoyable seeing them together.  The ups and downs in their relationship are believable and mostly arise from her childhood insecurities.  Gavin's brother Mick is also against their relationship and continually causes problems.  I got a bit annoyed by his lack of forgiveness towards Liz after all her attempts to make things right and glad the rest of the Riley clan was more supportive of the couple.

Knowing this story takes place in the world of baseball had me concerned that the sports jargon would be too much, but the baseball scenes were perfectly spaced throughout the story.  Seeing Liz, who never before had girlfriends, hang out with the other player's wives during the game and after humanized her and made her even more likable.  Seeing Gavin with the other players was like seeing an extended family of brothers with their joking demeanor.  These scenes brought out an extra layer to Gavin and Liz's personalities and made them appear even more compatible.  The secondary characters in this story are equally memorable and each one adds their unique touch to the storyline.

Jaci Burton has created another winner with Changing the Game.  The boys of summer turn up the heat in this super sexy story full of fun verbal sparring that grabs your attention from the first page and keeps you entertained until the very end.  Gavin is a truly wonderful hero who proclaims his love in a grand gesture that will bring tears to your eyes and make you wish you were the recipient.  The glimpses we have of the protagonists in the next installment of this series have me excited for the future and the fireworks sure to come.  This series just keeps getting better and better and I await each new release in breathless anticipation.  If you haven't read a Jaci Burton book before, what are you waiting for?  Now's the time to pick up the Play by Play series of books and enjoy these sporty bad boys.

*Book will be released August 2nd.

*I received this ARC from the author in exchange for my honest opinion.
at July 23, 2011