Those readers who like their suspense with a bit of steaminess thrown in can find just the book for them in Corporate Spy by Casey Sheridan.  Today I'm giving you a glimpse of this book to whet your appetite.  So keep reading to find out what drew me to this book.... 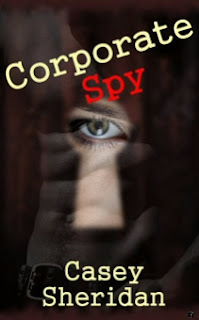 Sent to steal a secret file, Aimee breaks into the apartment of Bill James, the handsome employee of a rival company. But before she can get her hands on the file, Bill returns home unexpectedly.

Is Aimee caught in the act? Or is it mission accomplished?

When Aimee stepped inside the room, her foot kicked a stack of frames leaning against the wall. She closed the door behind her, and crouched down to get a better look; that’s when she noticed the large black digital camera on the floor next to the frames.

Each frame contained a black and white photograph: a Dodge Viper with a leggy brunette, a young man sitting on a Ducati motorcycle, a woman holding an umbrella and giving the photographer a coy look over her shoulder, and a tumble-down stone cottage standing in the middle of a desert.

Nice work, she thought. Too bad she didn’t have time to look through the rest of them. The time on the nightstand clock told her she’d better get straight to work.

Aimee quickly made her way over to the desk and shuffled through the papers scribbled with notes on photo shoots and web design. She sifted through folders with more notes and drawings of photography ideas that lay around the computers. Clearly, he got into photography when he wasn’t out riding his bike.

She then rifled through a box with numerous flash drives. Not one of them was the drive she needed. She had to find the right one.

She rummaged through the desk drawers, moving pens, pencils, and markers. She checked inside the box of staples; opened envelopes and looked through their contents. She even dumped out a box of paperclips, hoping the drive would be hidden among them. Then she checked the underside and back of the drawers for any secret compartments.

Her shoulders slumped as she slid the last drawer back into place, and then she turned to scan the room.

“Shit,” she cursed under her breath. Where could it be?

A faint noise caught her attention, and she tilted her head to one side, trying to catch every sound, but she heard nothing other than the ticking of the clock.

Aimee knelt on the floor and looked under the bed, hoping there would be a lockbox or something that held the drive inside, but there was nothing. That’s when she heard it–the unmistakable clatter of keys as they landed on a table. Her eyes went wide and her breath caught in her throat.

As she knelt next to the bed, she could hear him whistling as he came closer to the bedroom. Her gaze darted frantically around the room. She had to find a place to hide. But where? She jumped up, rolled across the mattress, and scooted into the closet just moments before the bedroom door swung open.

She loves to read and write, could spend all day in a book story, art museum, or chocolate shop. She also enjoys music, watching movies, and spending time with those she loves.

You can find her on the Web at: