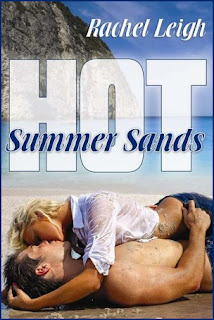 Chef Michelle Hutton flees her controlling mother in the UK for the sun and freedom of Greece, longing for a new beginning and maybe just a bit of Zante’s local heat. Sexy, pro-bono lawyer Sam Clarke might just be the one to teach her to let go. He's sexy, capable, and totally in control. And too damn hard to resist.

Sam Clarke and his best friend had once been the baddest boys to hit the local party scene—sex, booze, and more sex—until his friend is killed. Sam turned his back on the blatant sexuality of the island years ago, but can’t resist Michelle’s desire to bask in the sun and explore the need that grows between them.

Hot Summer Sands by Rachel Leigh packs quite a wallop in such a small package.  It's steamy right out of the starting gate as pampered debutante Michelle finally gets fed up with the charade her life has become through her mother's machinations and rebels in some very memorable ways.  To help her rebel is super sexy former wild child and now staid attorney for the downtrodden, Sam.  Both have come to the exotic locale of Zante to escape unhappy lives and start fresh and once Michelle is rescued from an unsavory man by Sam, the ensuing sizzle that connects them sets them on a steamy and emotional path to future happiness if they're willing to put past fears aside.

Michelle is a likable character finally showing some backbone after years of being what her mother wanted.  Through brief exchanges throughout the story their relationship continues to be bad and her mother almost sabotages things for Michelle and Sam before they begin.  Michelle doesn't want to be controlled anymore and worries that Sam's intense love for her, and his need to take care of others, will lead to again being controlled.  It takes a lot of soul searching to move past her fears and I applauded her final act of independence.

Sam too ran from parents going through horrible marital problems that threatened to drag him and his sister down.  For a long time after coming to Zante he saw relationships as toxic and went from one sexual encounter to the next until his friend's tragic murder by a former lover.  Since then Sam has steered clear of all relationships until seeing Michelle and then he quickly jumps in wholeheartedly.  He's extremely protective of women though and has a hard time convincing Michelle that that's not a bad thing.  He's also still fighting his own demons when it comes to where his friend was killed and it's a subtly romantic sign of how much he cares for Michelle when he makes an appearance where he swore he'd never show up at ever again.  Sam's much surer of their relationship and it takes a truly devoted man to wait for his woman as Michelle works through her issues.

This is an entertaining story set in a vividly exotic locale.  The characters are likable with believable issues that are too easily dealt with.  I never felt fully invested in Sam and Michelle as we never dug too overly deep into their lives.  There was an almost superficial feel to their inner psyches.  What was presented intensely were the sexual encounters, of which there were many, that overwhelmed the story.  The scenes were very hot though and varied and definitely kept you interested.  Fans of erotica will definitely find much to satisfy them with this story and I look forward to reading more from this author.  To sum up my thoughts about this story, I immediately think of the drink Sex on the Beach, and then raise a half-full glass to this story.

*I received this book from the author in exchange for my honest opinion.
at September 01, 2012