Book Blitz for The Billionaire’s Secret by Mika Lane (GIVEAWAY)

Readers looking for some steam to warm you on these cold winter nights will find much to like about this tale of opposites attracting.  Keep reading to get a tempting taste of The Billionaire’s Secret by Mika Lane, with its romance based on secrets, then add it to your bookshelf.  In honor of this erotically-charged tale make sure to fill out the form below for the chance to win 1 of 5 signed print copies of this book too! 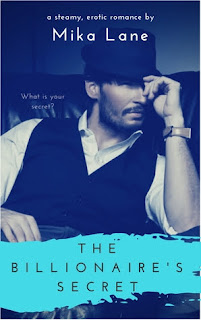 He’s straight as an arrow on the outside. And crooked as sin on the inside.
By day, Varden Gallagher goes to work at One Market Street, where he’s manager of a big, successful hedge fund. He’s powerful, wealthy, and can have any woman he wants. But at night he slides into a secret world. One where wealth and power count for nothing, and all that matters are your desires, and how you control them. Or don’t.
When he sees his business associate’s daughter—fresh out of college reporter Saffi Bartlett —at the secret Club Silk, he decides to have some fun. Little does he know, the joke’s on him, and it looks like his sinful ways won’t be hush-hush for much longer.
After all, isn’t it the straightest arrow that eventually breaks?

“I’m sorry to be rude,” I said to him. “But I’m expecting a friend. I do hope you have a good evening.”
His expression changed. Was that amusement?
“I’ll tell my dad you said hi,” I added, hoping he’d take the hint. I felt kind of bad—he did seem nice and was damn good-looking.
I was on the edge of my seat waiting, but Varden just stood there. He seemed to have no intention of leaving.
God, why doesn’t he take the hint?
Where was G? I reached for my phone and sent a text.
ur late. still coming?
I looked up from my phone.
Still Varden.
Shit.
“Varden, I’m really sorry but I have other plans tonight.”
“I know you do, Saffi.”
Huh?
“I know, because you made them with me,” he said. 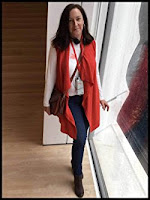 Writing has been a passion of Mika’s since a young age (her first book was "The Day I Ate the Milkyway"), but erotic romance is now what gives purpose to her days and nights. She lives in magical Northern California with her own handsome alpha dude, sometimes known as Mr. Mika Lane, and an evil cat named Bill. A devotee of the intelligent and beautiful, and lover of shiny things, she’s a yogi, hiker, traveler, thinker, observer, and book worm. She has been known to drink cheap champagne and has way too many shoes.
A National Reader's Choice Awards finalist, Mika always deliver a hot, sexy romp, often with imperfect characters, and a promised happily ever after (or at least happy for now).

a Rafflecopter giveaway
at December 09, 2017