Readers who enjoy emotionally intense reads will find themselves drawn to this epic series of books that show the power of love overcoming all adversity.  Keep reading to get a tempting taste of The Responsible Adult Series by C.F. White, with its m/m romance between between a troubled young man trying to care for his brother and a quiet and more seasoned man, then discover even more about these books by visiting the other sites hosting this tour.  In honor of this heart-wrenching series make sure to fill out the form below for the chance to win a signed print copy of the first book in this series too!


The Responsible Adult series follows bad boy Micky O’Neill as he attempts to better his life to bring up his disabled little brother. A past full of juvenile delinquency and living in a small town rife with idle gossip means Micky struggles to be seen as anything other than a no-hoper from the wrong side of the tracks... until he takes a job at the local supermarket and meets his boss, Dan, a university graduate and self-proclaimed shy, awkward bookworm.
Dan, older and burned from a past relationship, is the one person who sees through Micky’s tough-guy facade to the true heart underneath. With fear and mistrust on both sides, the two must steer their way through a complicated relationship where outside forces are determined to break them up at every turn.
Responsible Adult is a series about growing up and learning that love always brings responsibility. 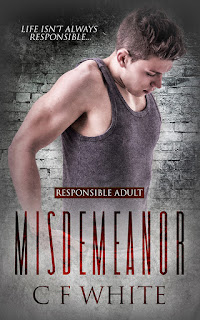 BOOK ONE - MISDEMEANOR
Love isn’t always responsible...
After his mother tragically dies and his deadbeat father goes off the rails, nineteen-year-old Micky is left to care for his disabled little brother, Flynn.
Juggling college, a dead-end job and Flynn’s special needs means Micky has to put his bad-boy past behind him and be the responsible adult to keep his brother out of care. He doesn’t have time for anything else in his life.
Until he meets Dan… 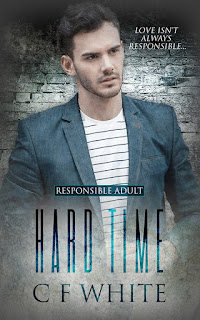 BOOK TWO - HARD TIME
Love isn't always responsible...
After Micky O’Neill is remanded in custody for breaching his court order, his already tempestuous relationship with Dan Peters is tested to the limits.
Having to battle their way through a court case that could end with Micky in jail, social workers breaking up the family home and the return of Micky’s deadbeat father, it seems everything is set to destroy their relationship before it even has the chance to start.
With such high stakes involved, not just for Micky but for once-burned, twice-shy Dan, they both have to learn that falling in love isn’t always responsible. 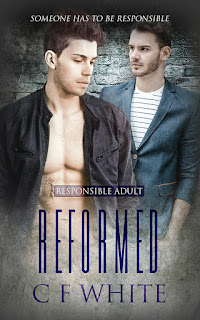 BOOK THREE - REFORMED
Someone has to be responsible...
Micky O’Neill and Dan Peters now live in Wales, bringing up Micky’s disabled little brother away from small-minded Heathwood and close to Micky’s deceased mother’s family.
Things are fine…until Dan begins his dream career as an English teacher at the local school and Micky, main caregiver to Flynn, is isolated in a village that only serves to remind him of his mother’s absence.
With Flynn’s health deteriorating and his needs becoming more complex, everything is tested to its limits and Dan seeks solace in a friendship with a fellow teacher, sending Micky into further turmoil.
After an accusation is leveled against Micky and it seems he’s slipping back into his old ways, he and Dan are torn asunder. To repair the rift, both have to accept responsibility—for life.

“I miss you, Dimples.”
Dan exhaled. Which probably sounded like a hurricane down the phone. At least Micky chuckled.
“I miss you, too, baby.” Dan curled his hand around the wooden pillar and squeezed, regardless of the splinters it could cause to his palm. “Real bad.”
“I’m going to get better, Dan. I promise.”
Dan blinked. Micky sounded like he was slurring, or that could have been the added distance and crackle of signal going in and out of range.
“What do you mean?”
“I’m a shit boyfriend. I know I am. When I get back, I’m going to be better. I swear to fucking God, when Flynn gets outta here, I’m gonna get my head screwed on.”
Dan stumbled forward down the front step, doing his utmost to get a better range of signal. Micky’s voice was garbled and not just because he was pouring his heart out.
“Micky, baby.” Dan sat on one of the wooden benches and rested his elbows on his knees. He was shaking. He didn’t like the way Micky was talking.
“And, y’know, screw you good and proper.”
Dan laughed, but it was drowned out by the raucous one that wafted from the open pub door when a man popped out to light up a cigarette. Dan stood and fumbled farther away from the entrance to the edge of the car park.
“Where are you?”
Dan scrunched up his face. He spun to look back at the Old Red Lion. He should tell the truth. But something in Micky’s voice made him twist and bundle farther into the darkened valley.
“At home. Just putting the rubbish out.”
Dan closed his eyes. There was a brief pause the other end of the line. Dan’s hand shook as he held the phone to his ear.
“I love you, Dan. I do. And I’m sorry.”
“Get home, Micky.” Dan trotted faster down the valley, heading toward home, not bothering to go back for the jacket he’d left on the pub chair. “Bring Flynn home. And we’ll talk it all out.” He practically ran the rest of the way. “I love you, too.” 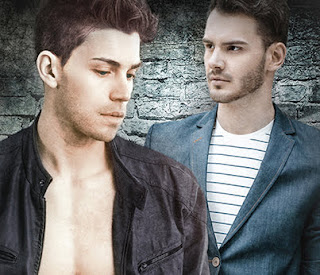 Brought up in a relatively small town in Hertfordshire, C F White managed to do what most other residents try to do and fail—leave.
Studying at a West London university, she realised there was a whole city out there waiting to be discovered, so, much like Dick Whittington before her, she never made it back home and still endlessly searches for the streets paved with gold, slowly coming to the realisation they’re mostly paved with chewing gum. And the odd bit of graffiti. And those little circles of yellow spray paint where the council point out the pot holes to someone who is supposedly meant to fix them instead of staring at them vacantly whilst holding a polystyrene cup of watered-down coffee.
She eventually moved West to East along that vast District Line and settled for pie and mash, cockles and winkles and a bit of Knees Up Mother Brown to live in the East End of London; securing a job and creating a life, a home and a family.
After her second son was born with a rare disability, C F White’s life changed drastically and brought her pen back to paper after she’d written stories as a child but never had the confidence to show them to the world. Now, having embarked on this writing journey, C F White cannot stop. So strap in, it’s going to be a bumpy ride.

a Rafflecopter giveaway
at December 05, 2017