As a fan of rock star romances I was immediately drawn to the premise of this book and its romance between a young woman with self-esteem issues and a delightful young man carrying the weight of the world on him.  Keep reading to get a tempting taste of A Cruel Kind of Beautiful by Michelle Hazen, along with my impressions of a close knit rock band’s rise to fame, then add it to your bookshelf.  In honor of this first installment in the Sex, Love, and Rock & Roll series make sure to fill out the form below for the chance to win a $50 Amazon GC too! 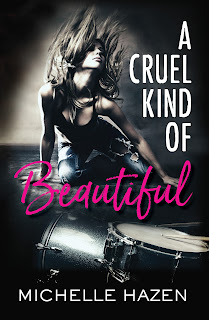 If you can’t get to the Big O, can you get to the happily ever after?
Jera McKnight loves music, swoons for hot guys, but sucks at sex. Jacob Tate is her perfect storm: a pun-loving nude model with a heart as big as his record collection.
When a newspaper-delivery accident lands him in her living room, he’s almost tempting enough to make her forget she’s never been able to please a man—in bed or out of it. Sure, he laughs at her obscure jokes, and he’ll even accept a PG-rating if it means he gets time with her, but he’s also hiding something. And it has everything to do with the off-limits room in his apartment.
Jera pours all her confusion and longing into her drum kit, which pays off when her band lands the record deal of their dreams. Except just like Jacob, it might be too good to come without a catch.
She doesn’t know if her music is good enough to attract a better contract, or if she’s enough to tempt a man like Jacob to give up his secrets, even if they could fix her problems between the sheets. But if this rocker girl is too afraid to bet on herself, she might just end up playing to an empty house.
Grab the first book in this addictive new series if you love snarky heroines, the backstage scoop about mouthwatering rock stars on the rise, and Kindle-melting sex scenes. Perfect for fans of the ragtag band families in Kylie Scott and Crystal Caswell's books. 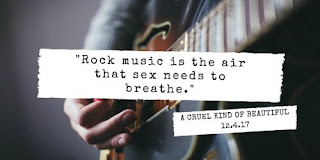 As a reader obsessed with rock star romances I found myself charmed by this character-driven romance set amidst the backdrop of a rock band’s early rise to fame.  Issues of self-esteem, accepting obligations, and all the expected ups-and-downs young rockers face in an attempt to not sacrifice their creativity for promised shots at fame abound in this compelling read.  With a romance that builds slowly and satisfyingly it all leads to an ending that had me cheering and hopeful for the next installment.

Jera McKnight comes from musical genes as her father had his own brush with music fame before it all slipped away.  While she wants to forge her own musical path she still feels the pressure of trying to reach the heights he never did and with him as their band’s manager the pressure is ever-present.  While she’s finding some success in the music world, it’s her love life that’s suffering. After her most recent break-up where she was made to feel as though she were the problem and that her inability to orgasm led to him feeling emasculated, she’s sworn off relationships.  The moment she makes that decision though is the moment she meets a young man who tempts her beyond reason and has her struggling even more with her self-image in an attempt to feel worthy of him.  It’s a rocky road to romance that sometimes left me frustrated by her actions as she jumped to conclusions while assuming the worst.  She let her fears rule her in matters of the heart and became her own worst enemy as she put pressure on herself where none was needed.  She’s strong-willed in so many ways but when it comes to trust and love it’s clear she’s a bit leery.  Luckily for her, the man whose heart she’s been captivated by never gives up on her on their way to a sweet and sexy HFN romance.

Jacob Tate was once the star of the baseball team, the young man every girl wanted and the one every guy wanted to be.  The day his parents died though is the day everything changed, the day he discovered what his real priorities are, and became a responsible man despite his young age.  For him, life became all about his siblings and work, until the day he sent a newspaper through Jera’s window.  He’s instantly attracted to her but senses her hurt and proposes to move their relationship at a snail’s pace while they grow closer together and reveal mutual fears and insecurities.  Jacob’s the quintessential book boyfriend. He’s sweet, sexy, and unwaveringly supportive.  He’s devoted to his family and sacrifices much to see those he cares about happy.  He doesn’t like lies and asks for nothing more than the truth from Jera and her belief in his feelings for her and his dedication to their future.  He’s extremely understanding and never pushes Jera for more than she can give until the day she pushes him away which forces her to finally start judging others on their own merits.  Jacob’s a drool-worthy character, a delight with his words and deeds.  He was the highlight of this story and has been providing nightly fodder for my dreams since I finished reading this book.

This is more than just your average rock star romance.  It’s a tale full of heart and soul that gives ample time to Jacob and Jera and their fragile connection which pulled at my heartstrings and had me rooting for them from start to finish.  Jera’s tired of changing for others and just wants to be loved for herself, while Jacob is the quintessential caretaker who longs to see Jera have faith in him.  He thrives at taking care of others while she’s learned not to count on the men who have claimed to love her and it all leads to an intense relationship that was the driving force in this story.  Together they’re a delightful couple with a connection teeming with sexual tension that didn’t come to fruition until late in the story in a scene that was sweet and scorching.  Surrounding this larger-than-life main couple was a cast of equally memorable secondary characters who have me longing to see their stories told.  Jera’s bandmates are a quiet support to her, sexy and mysterious, and they’re a formidable band as they stick up for each other and their vision when temptations arise.  Danny’s the one in the band who fixes things, the one who keeps them steady, but he has his own disappointing past when it comes to love.  He too has been made to feel unworthy and his heartache is palpable when he lets his true feelings show. There’s an air of mystery to him and I look forward to his story being told next. Jax is the lead singer, cool and confident, and is quite happy in the spotlight. He’s popular with the ladies and seems happy to be playing the field.  Behind the bad boy rocker facade though lies a little boy with mommy issues.  He too has never felt good enough and used his talent to get attention as a child which is why he’s so desperate to get fame now.  For him, fame means love as that’s what his mother taught him long ago and his story has me equally intrigued.  All these characters, with all their imperfections and foibles, make for a memorable story that pulled me in from the very start.  I look forward to where life will take The Red Letters and recommend this book to fans of rock star romances looking for a bit of originality.

Michelle Hazen is a nomad with a writing problem. Years ago, she and her husband ducked out of the 9 to 5 world and moved into their truck. She wrote most of her books with solar power in odd places, including a bus in Thailand, a golf cart in a sandstorm, and a beach in Honduras. She’s currently addicted to The Walking Dead, hiking, and Tillamook cheese.

a Rafflecopter giveaway
at December 12, 2017