Readers looking for an exhilarating thrill-ride will get just that with this m/m-fueled superhero story that puts a unique spin on the mythologies we all know and love.  Keep reading to get a tempting taste of Lovesick Gods by Amanda Meuwissen, along with my impressions of it, then discover even more about this epic tale by visiting the other sites hosting this tour.  In honor of this unforgettable tale make sure to fill out the form below for the chance to win a $25 bookstore GC too! 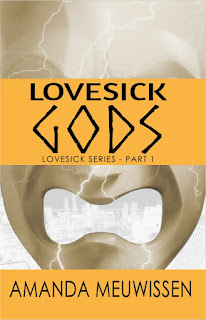 The elements touch everyone on Earth—Fire, Water, even Light—but every so often someone becomes more attuned to their elemental leaning and develops true power. When an evil Elemental known as Thanatos arrived in Olympus City, it saw the rise of its first hero—Zeus. But the death toll caused by defeating Thanatos changed Zeus, who by day is young detective Danny Grant.
It’s been six months since Thanatos terrorized the city at the start of Lovesick Gods. Danny should be used to his duty behind the mask, but the recent past haunts him. His girlfriend left him, he snaps at the barest provocation, his life feels empty—he needs an outlet, any outlet to pull him out of his depression.
Enter notorious thief Malcolm Cho, the Ice Elemental Prometheus. There was a time when Danny welcomed a fight with Cho, filled with colorful banter and casual flirtations that were a relief compared to Thanatos. Even as a criminal, Cho had recognized the threat Thanatos posed and promised to help Danny stop him, but the day Danny needed Cho, he never showed. Cho was the reason so many people died that day—including Danny’s mother.
Danny decides to teach the man a lesson and fan the fire of their attraction into something more. At worst, he’ll get some no-strings-attached sex out of the deal and finally blow off steam; at best, he’ll get Cho to fall in love with him and then break his heart to spite him. Danny doesn’t expect to fall for Cho in the process, and he certainly can’t predict the much darker threat on the horizon.

Mal scrolled through the contacts on his phone for the fourth time since that morning, which was borderline obsessive, he knew. Maybe switching from glasses to contacts after the coffee shop had skewed his vision. He still couldn’t believe his eyes when he once again came upon the entry labelled ‘Sparky’ and the phone number he knew to be legit because he’d taken it from Danny’s own cell phone.
He could have left it at that, not given Danny his number in return, but their chances of moving from flirtation to genuine carnal activity was significantly higher if both of them had the option to call.
“And maybe, some night soon, if you play your cards right…I’ll let you bend me in half like you want.”
Mal shifted in his seat at his worktable, his slacks growing tellingly tight at the memory of Danny’s whispered voice, promising things Mal had fantasized about often since their first encounter, but he’d never imagined he’d get to play those fantasies out for real.
He could afford another minute to muse about Danny Grant before he returned to the schematics for the museum they’d be hitting in a few weeks. Once the heist was pulled off, if a certain electric hero caught wind of it and showed up, that could put a damper on whatever games they played, but it still gave Mal almost three whole weeks to delve into just how debaucherous Danny wanted to get.
They’d left things on a sour note before, but clearly Danny wasn’t holding any grudges. He wasn’t looking for dinner and dancing either.

BUY THIS BOOK AT AMAZON FOR $0.99 FOR THE DURATION OF THIS TOUR here.

Having read and enjoyed this author’s previous works I was thrilled to see her back with a series starter full of compelling characters, heavy issues, and a steamy romance full of emotional baggage. This is an intense read, an exhilarating one, that kept me on the edge of my seat as I became fully immersed in the lives of the two male leads and their frenemies to lovers romance that had me relishing each page as I got closer to The End.

Lovesick Gods sets itself apart from other fantasy reads by putting a unique spin on traditional Greek myths as well as people’s perceptions of superheroes. The characters of this book are based on various elements like Water, Air, Earth, Light, and Metal and are part of the character’s genetic makeup. The power of these elements only manifest under intensely emotional moments though and take characters towards the side of hero or villain. For Detective Danny Grant, it’s the death of his partner at the hands of a Dark Elemental villain, and the many other lives lost at the hands of evil, that changes his life irrevocably and sets him on a path that takes him to the dark recesses of his mind. Danny may wear the cape of a superhero but he’s far from perfect. He has a dark soul weighed down by a desire for revenge as he still carries guilt over all the deaths that he’s been unable to stop. Danny’s an angry man, falling deeper into depression as the story progresses, and it’s hard to see him finding his way out as he seems determined to get revenge on the man who he sees as a betrayer...Ice Elemental Malcolm Cho. He once saw Malcolm as a friend, despite them being on opposite sides of the law, but when he needed him most he wasn’t there. His plan for revenge is to make Malcolm fall in love with him, then break his heart, but it’s a plan that ultimately goes awry as they grow closer together and come to need each other. Danny’s depression is a weighty issue that the author deals with realistically while seamlessly incorporating it into the storyline. His negative feelings are palpable and I felt sympathetic for all he was trying to deal with while trying to live up to his superhero reputation. He’s an intriguing and compelling character whose life isn’t lived in perfect black and white and I thoroughly enjoyed his combustible relationship with Malcolm as they danced around each other in a suspenseful and exhilarating journey from the first page to the last.

Malcolm Cho is seen as a bad guy in the story but beneath the surface lies a man with his own code of honor and it’s that dichotomy that first bound him to Danny. They may seem like opposites but deep down he’s hurting just as much. He has panic attacks and scars both inside and out, but he still has a caring side that shines through and made his relationship with Danny even richer. I enjoyed Malcolm and his scenes with Danny which were scorching one moment and sweet and tender the next. On a whole he was an immensely appealing character and I found myself fully invested in where life took him.

From the first page to the last this was an exhilarating read, multi-layered, with a beautiful balance between action and romance. Danny and Malcolm may be on opposite sides of the law, but when it comes to romance their connection is combustible. Scenes of tenderness were balanced with erotically-charged encounters that took on a tone of dominance and submission that further stressed the instensity of their coupling. Along with an intense romance, good and evil still fought to survive as Danny dealt with a string of robberies and Malcolm planned his next heist. These scenes were action-packed with depictions that had a cinematic feel and made for a larger than life narrative. Surrounding this likable main couple was a cast of colorful secondary characters that left an equally indelible mark. For Danny, it was a supportive family longing to help him heal along with a group of fellow crime fighters bound together by grief and tragedy. For Malcolm, it’s an endearing group of misfits who’ve all sworn to stand beside him to protect the neighborhood they love. On a whole this was an exciting thrill ride with an epic romance that’s only just begun. With plenty of story left to tell courtesy of a heist gone awry and Danny’s still-hidden agenda, readers will be left breathlessly counting down the days until they can jump back into this cleverly-crafted world. 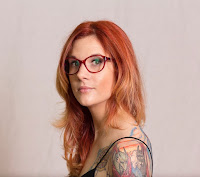 Amanda Meuwissen has been writing and posting online for many years, including maintaining the website and blog for the software company Outsell. She is an avid writer and consumer of fiction through film, prose, and video games, and is the author of the paranormal romance trilogy The Incubus Saga and young adult novel Life as a Teenage Vampire. Amanda lives in Minneapolis, MN, with her husband, John, and their two cats.

a Rafflecopter giveaway
at December 08, 2017