Book Cover Reveal for Trying to Score by Kendall Ryan

Readers have reason to celebrate this upcoming release of an attorney who’s hired by star hockey player Teddy to keep a past sex tape secret...she’s especially drawn to the case as she’s the other person on the tape.  Keep reading to get a tempting taste of Trying to Score by Kendall Ryan, then add this third installment in the Hot Jocks series to your bookshelf when it releases on November 12th! 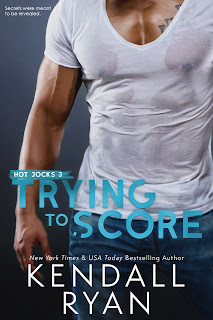 “Make a sex tape,” they said.
“It’ll be fun,” they said.
Spoiler alert: they lied.
I’m an overworked attorney, but hey, at least my latest case is an interesting one. I’ve been hired to help my friend Teddy keep a sex tape he made years ago private. And considering Teddy is a pro hockey hunk with a huge reputation and an even bigger following, this news can’t get out.
Plus, I have an extra interest in making sure that tape never sees the light of day. Because the other person in that video?
Is me. 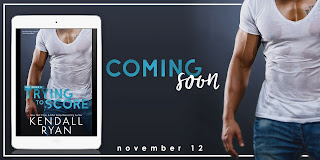