Fans of MC romances will find themselves celebrating the release of the Patched Over anthology and the sexy and suspenseful reads to be found amongst the pages.  Today I’m giving you a tempting taste of Rite of Passage by Janine Infante Bosco, along with Losing Bash by Khloe Wren, through my reviews for both of these quicks reads that will leave readers wanting more courtesy of endings that will have you counting down the days until these stories come to a definitive HEA. 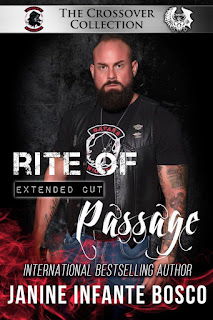 When I was nineteen, I left Texas and my dysfunctional family behind, and I haven't looked back. Life was good for a while. I joined the Satan's Knights motorcycle club and immersed myself in art. The kind of art that requires a gun and a body as a blank canvas. But all good things must come to an end, and I soon found myself as a single father, struggling to find my place in a new charter. Now my estranged mother wants me to come home, which means facing my past. And that doesn't just include my family. It also includes the childhood friend I left behind. All grown up and pissed as hell, Bess is giving me one hell of a cold shoulder. I'm not the Ryan Perry she remembers, and she sure as hell isn't willing to get to know Needles, the man I am now. With her fancy clothes and her holier-than-thou attitude, she's creeping under my skin and filling my head with impure thoughts. I need to get back to New York before I get hooked on something I'm not supposed to have, or worse, start believing that this is my Rite of Passage.

Readers are once again dropped into the world of the Satan’s Knights MC with all the characters we’ve come to know and love with a novella featuring “Needles” aka Ryan. In this tale of second chances readers will find themselves quickly consumed by the action and chuckling at the antics of two match-making mothers who try to bring former young loves back together.

Needles left home at an early age out of feelings of unworthiness and frustrations over finding his place in the world after his choices never seemed to align with what his parents wanted for him.  It led to a nomadic lifestyle, along with a rap sheet, as well as becoming a single father after his little girl’s mother ran away.  Being a father though leads to even more feelings of unworthiness as he finds it difficult to connect with his daughter and show her love after having his heart turn cold long ago.  The death of his father though has him returning home to hopefully make a better connection to his mother for the sake of his daughter as well as reconnecting with the only girl to ever hold his heart.  His reunion with Bess doesn’t go well at first but the machinations of their mother’s leads to an unforgettable night that was supposed to be for just one night but soon has him wanting to come back for more.  Bash is a bit bitter when readers first meet him, a man clearly weighed down by the past.  He’s a bit cold and awkward in his interactions with his own daughter as well as harsh words directed towards his mother. Seeing Bess again may highlight all their differences, but it also shows a combustible connection that has him wanting more from her.  He might just get that second chance too when matchmaking mothers once again give him a reason to come home...and this time he might just stay.

This novella focuses mainly on Bash, and what a decadently delightful hero he is indeed! As the story progressed you could see his softer side emerging, a side that was at times endearing and at other times sinfully sexy.  He’s a complex hero at times too who often saw only the worse of himself.  In contrast is Bess, his young love who seems too good for him...at least he thinks so.  Readers don’t learn too much about her here but it’s clear that they have unfinished business that I can’t wait to see play out.  Alongside this appealing main couple were their delightful mothers whose antics were endearing and brought a smile to my face in their not so subtle attempts to bring Needles and Bess back together.  Readers also got a few glimpses of the Satan’s Knights, most notably Wolf and Jack in a scene that was playful and brotherly in its vibe.  On a whole this was an entertaining beginning on a journey of second chances that has me counting down the days until readers get to see how Bash’s story truly ends! 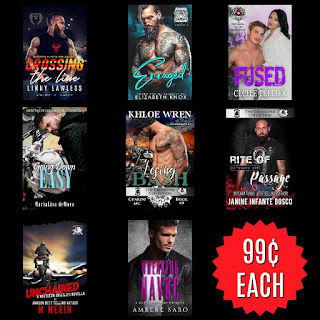 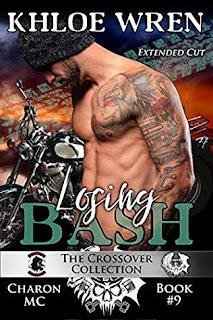 LOSING BASH
Life has never been easy for Jake “Bash” Alfonsi, but he’s always found a way to survive. Even when his father gave into his PTSD demons and took his own life just days before he turned twenty-one, he got through it. He even managed to go on and find a few slices of happiness in his life. But this latest hand life dealt him is his hardest challenge yet. Will Bash be able to rise once again, or will he get lost in his pain forever?

Another installment from the Charon MC series may be a quick tale but it’s a powerful one.  With a hero who’s a bit bad boy, along with being a good son who’s devoted himself to his mother and his club, he’s starting to feel a bit unsettled when readers first meet him.  Bash is starting to realize that he’s missing out on a life of his own which is made especially obvious when his club sends him to help the Satan’s Knights where he lays eyes on a sexy bartender.  She makes him feel for the very first time and has him wanting to do something just for himself.  Before he can move forward though he needs to tie up his past which leads to a few tears and a brighter future that leaves readers with a cliffhanger that has them waiting with bated breath for more.

Bash’s story was an emotional one, a timely one dealing with a mother with dementia and a father whose PTSD led to his death.  It made him a hero I instantly fell for as he shows a kind heart and endless loyalty to others while in return he’s sometimes taken advantage of for being so caring.  This novella focuses mostly on him which left little time to learn about Lydia, the one night-stand who quickly had him wanting more from her.  It also has me wanting to learn more about her too as the few words she said spoke of a heroine with scars inside and out.  Their first interaction was crackling, and showed a flirty side to both of them, before leading to a combustible erotically-charged night.  Her video message to him at the end of the story was a perfect ending and a great start to his new beginning that has me excited to read the next story in a new trilogy.  Along with this promising romance readers got to see glimpses of the Charon MC as well as the Satan’s Knights which rounded out this story and brought moments of levity courtesy of Riggs.  From start to finish this was an entertaining novella that fans of the genre won’t want to miss!