Book Spotlight on A Dash of Christmas by Samantha Chase (GIVEAWAY)

Two people who’ve been sworn enemies for years find comfort in each other’s arms as they try to figure out what they want out of life in this heartwarming and sensual tale of frenemies-to-lovers.  Keep reading to get a tempting taste of A Dash of Christmas by Samantha Chase, then be sure to add this holiday-themed romance to your bookshelf.  In honor of this tenth installment in The Montgomery Brothers series make sure to fill out the form below for the chance to win 2 bundles of the first four books in this series too! 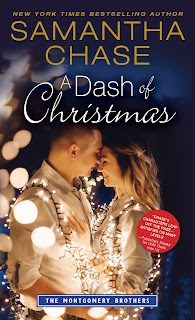 With a dash of Christmas magic...
Two people who have spent most of their lives being rivals...
Learn a little something about following their hearts...
Carter Montgomery broke the family mold when he went to culinary school. Now a successful restauranteur, he’s at a crossroads: should he continue on his successful path or look for a new challenge? What he needs is time alone to think things through. But his matchmaking family has other ideas...
Emery Monaghan’s no-good fiancé has embroiled her in scandal and she needs a way out. When mentor Eliza Montgomery offers her a refuge, she’s relieved—until she realizes that the deal means rubbing elbows with Eliza’s son Carter—Emery’s childhood nemesis. 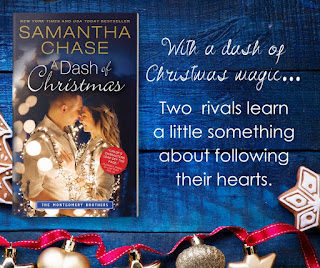 *LEARN MORE ABOUT MS CHASE AND HER BOOKS here.

a Rafflecopter giveaway
at September 28, 2019