Book Spotlight on Anyone But Rich by Penelope Bloom (GIVEAWAY)

Past loves find themselves drawn to each other once more in this contemporary romance of second chances.  Keep reading to get a tempting taste of Anyone But Rich by Penelope Bloom, along with the author giving greater insight into the characters driving this series, then add this title to your bookshelf.  In honor of this first installment in the Anyone But.... series make sure to fill out the form below for the chance to win a $25 Amazon GC and a digital copy of this book too!

Meet the Kings of North Carolina with Author Penelope Bloom
Anyone But Rich is the first book of my new, three book "Anyone But..." series. Every book is a true romantic comedy and is full of moments that I hope will have you laughing out loud, if not at least breathing out a little puff of air from your nose.
Anyone But Rich follows the oldest King brother, Richard King, and his love interest, Kira Summerland. Seven years ago, the King brothers left behind a trail of scorched earth as far as Kira and her best friends, Iris and Miranda were concerned. The three women swore an oath that they’d never date the King brothers again, even if they wound up becoming mega-famous billionaires and came back on their knees, begging for forgiveness.
But that’s exactly what happened. Now, Kira isn’t so sure she’ll be able to hold herself to a vow she made seven years ago, even if breaking it could drive a rift between her and her best friends.
Rich and the King brothers are global phenomenons. Each of them takes their own, unique approach to melting hearts. Rich is the kind of guy who puts business first and relentlessly pursues his goals, even if it means ruffling feathers along the way. That’s what makes Kira so special for him. She’s the one person who can bring out a softer side of Rich, and at times, even a funny side. But Kira or not, he’s generally seen as the face of the company, and he’s easily the biggest name to ever land in a place like West Valley.
Cade is Rich’s twin brother, but the two men couldn’t be more different. Cade is a somewhat strange blend of intelligence, goofiness, and unbearable cockiness. He can turn any situation into a joke, but behind the laughs and crude comments, he still wonders if his high school crush, Iris, would ever look beyond their past.
Nick is the youngest of the trio and generally thought of as the quiet genius of the group. He’s not as in-your-face as Rich can appear, but Nick commands respect in his own way. He also has the closest relationship with Cade, partly because Nick is the only one who ever seemed up to the task of keeping his wild, older brother alive.
All in all, the three brothers are like the riders of the apocalypse, if apocalypses were caused by melted panties and broken hearts, at least.
But the King brothers all share one thing in common. Whether they’ll ever admit it or not, they all came back to West Valley for the girls they left behind. Anyone But Rich is the story of Richard King and his attempts to win the forgiveness of Kira Summerland, his old high school flame. The question for Rich is how long he can pretend forgiveness is all he wants. For Kira, it’s a question of whether she can look past the mountain’s worth of warning signs telling her to stay as far away from Rich as possible.
There are endless obstacles between the King brothers and their West Valley girls, but the King brothers aren’t the type to shy away from a challenge. They’ve just never faced one this great. 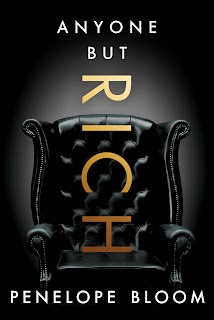 Seven years ago, my best friends and I made a promise: No matter what, we would never date one of the King brothers. Even if they grew up to become megafamous, gorgeous, heart-stopping billionaires. Even if they crawled on their knees and begged for forgiveness.
But guess who just flew back into our lives in a private jet? And guess who just showed up to my job on my first day? Richard. King. Fortunately, it takes two seconds for Richard to reveal he hasn’t changed. Conceited. Cocky. Rude. Unfortunately, he’s also the kind of gorgeous that’s borderline offensive—with a jawline to make statues self-conscious and a grin that short-circuits my brain.
He’s spent years taking what he wants. I doubt he’s hungry for anything else—except me, apparently. There’s no way I’ll let him maneuver his way back into my life. My friends would never forgive me. I would never forgive me. But did I mention his jawline?

Penelope Bloom is a USA Today, Amazon, and Washington Post bestselling author whose books have been translated into seven languages. Her popular romances include His Banana, Her Cherry, Savage, and Punished.
Her writing career started when she left her job as a high school teacher to pursue her dream. She loves taking her imagination for a spin and writing romances she’d want to live. She likes a man with a mind as dirty as sin and a heart of gold he keeps hidden away. Her favorite things include getting to wear socks all day—pants optional—and being a positive example for her girls. Showing her daughters that no dream is too big, no matter what anyone tells them, is worth all the late nights, doubts, and fears that come with being a writer.
Stay connected! For giveaways, goodies, updates, and extras, join the mailing list.

a Rafflecopter giveaway
at September 09, 2019