Book Release Blitz for All the Way by Kendall Ryan (REVIEW)

Friends become something more when a star hockey player agrees to tutor his best friend through the online world of dating with unexpected attraction the result.  Keep reading to get a tempting taste of All the Way by Kendall Ryan, along with my impressions of this fun and flirty romance, then add this second installment in the Hot Jocks series to your bookshelf! 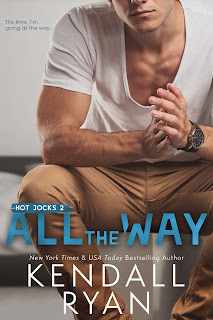 I know it’s time to move on from my rocky past and get back out there and start dating again.
It’s just that every time I think about it, I get all nervous and sweaty.
Good thing I have a secret weapon to help me—my best friend, professional hockey stud Owen Parrish.
He’s the king of hookups, and promises he’ll be my guide through the world of online dating. With his help, I know this won’t be as hard.
*****
I’ve never been this hard in my entire life.
My friend Becca wants my help hooking her up with some douchey guy from a dating app.
I said I’d help her—but now I’m noticing all kinds of things I can’t ignore, like how pretty she is behind those baggy clothes and messy buns.
I want to be the one to help her, to show her the ropes in the bedroom, and it turns out, Becca’s game to let me take a more hands-on approach.
But what happens when she’s ready to take her newfound confidence and move on? I’ve never been boyfriend material, but for her, I want to try. 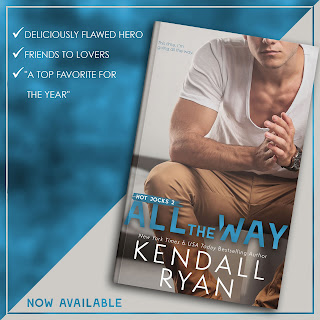 It’s a delightful tale of friends-to-lovers found amongst the pages of this contemporary romance set in the hockey world that not only warmed my heart but also brought a smile to my face.  When a sexy player, who’s popular with the ladies and dedicated to one-night stands, finds himself helping one of his best friends unexpected sparks fly as well as changing both of their lives irrevocably.

Owen Parrish is at the top of his game both on and off the ice when a night of fun and tequila shots changes everything between him and his friend of four years, Becca.  Over the last four years they’ve grown close, he’s even learned about her painful past that still holds her back today.  He sees her as smart, caring, and loyal to those close to her...and in quiet moments he also notices how pretty she is.  He doesn’t want to ruin the friendship they have though, so when she makes a surprising request he does all he can to ignore it.  But with her pushing forward in relearning how to be intimate with a man again his jealous side comes out as he offers to be her tutor which brings them closer than ever as he soon warms up to the idea of being someone’s boyfriend.  It’s not a simple journey though as his feelings of unworthiness, his fears over ruining what they already have together, makes for a bit of angst on the way to HEA.  To the outside world Owen seems confident and fun, clearly in control of his life.  Being with Becca though brings out another side, a hero with surprising depth as he’s caring and protective of Becca.  He lets her set the pace while still making their encounters sizzling in a journey that empowers her and changes how he views sex and romance...especially when considering it’s your best friend.  He too grows throughout the story, going from just a decadently delicious hero to one who warmed my heart through his sweet words and deeds.

Becca’s been best friends with Owen for four years, standing by while he goes through women like tissues.  While she doesn’t like hearing about his escapades she does admire how casual he is when it comes to his one-night stands which makes him the perfect choice to help her get more comfortable around men.  Though she’s gone through years of therapy for an attack early in her college years it’s still holding her back today which has her determined to move on.  Trying online dating has only ended in frustration as just kissing has her freezing up.  She needs someone she can trust, someone she feels comfortable around...which leads her to Owen.  Though her first request of him ended awkwardly it’s not long before he agrees to be her tutor in a journey that saw her becoming empowered as well as wanting more from Owen...something far beyond their initial agreement.  Throughout this story I found Becca to be an immensely likable heroine, an easily relatable one who’s smart and sweet, the reliable one who never goes over-the-top.  Her request of Owen was highly unexpected but made sense as she was comfortable around him, knew he’d protect her no matter what, which let her just feel instead of thinking.  Their time together both in and out of the sheets was crackling, from heartfelt words to fun and flirty banter, they were a delight together and I was rooting for them every step of the way.

On a whole this was a thoroughly entertaining romance between a couple who crackle whenever they’re together.  They’re both likable all on their own, but together they were delightful in a romance that warmed my heart and soul while making me smile a time or two too.  Some might find the premise a bit silly, but I bought into it completely courtesy of a wonderful main couple.  Sweet and sexy encounters were nicely balanced between action on and off the ice, as well as entertaining scenes amongst this wonderful group of friends.  Though this story stands nicely on its own I enjoyed seeing the couple from the previous book and can’t wait to see more of Teddy and Sara as the connection between them is palpable.  The Hot Jocks series just keeps getting better and better and I can’t recommend it enough to all readers looking for a decadently delightful hero and a heroine who finally takes charge of her life in an unforgettable romance that I’m still thinking of today!