Readers have reason to celebrate today with the rom-com My Best Friend's Mardi Gras Wedding by Erin Nicholas going on sale for FREE.  Readers will find themselves drawn to the unforgettable meeting that takes a more permanent turn in this tale of a fake boyfriend, and a promise, that binds two strangers together.  Once you’ve been fully tempted by this first installment in the Boys of the Bayou series get ready to add it to your bookshelf while it’s on sale for FREE. 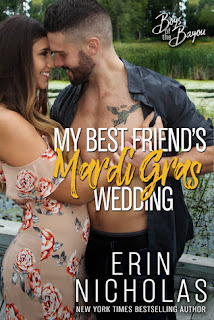 A small town, fake boyfriend romantic comedy.
Josh Landry is one of the hottest bartenders in New Orleans. He's shown many a female tourist that things are definitely big and easy down here.
And he's now been celibate for a year. Because he finally met her.
Yes, her. The One.
But, after nothing more than a hot goodnight kiss and a promise to meet up again next year if they're both still interested, she went home to Iowa.
It's been a long year.
But now it's Mardi Gras again and he's ready for his happily ever after.
If she shows up.
***
Oh, she shows up. For her best friend's wedding.
But Tori is a terrible bridesmaid because all she can think about is her knight-in-shining-Mardi-Gras-beads from last year.
Well, and because she accidentally lays a hot kiss on her BFF.
Aka, the groom.
Unfortunately, no one believes that it was a case of mistaken identity. So, now she has to convince everyone she has no intention of ruining the wedding. She's going to need a crazy-about-her boyfriend ASAP. Even if he's just faking it.
Well there's only one other person she knows in Louisiana...
Josh is all in. In fact, he's thrilled. And he's not faking anything.
But the groom isn't faking his sudden case of cold feet either.
And now Tori might have a choice to make. 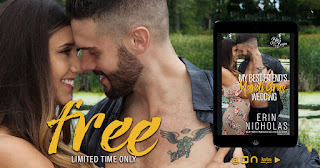