As part of her Stage Dive series Ms Scott has returned with the exhilarating, sexy, and suspenseful read of a bodyguard protecting the body of a flirty plus-sized model when a stalker sets his sights on her.  Keep reading to get a tempting taste of Closer by Kylie Scott, along with my impressions of this novella that’s part of the 1001 Dark Nights collection, then add this romance to your bookshelf! 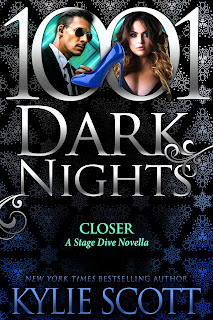 From New York Times and USA Today bestselling author Kylie Scott comes a new story in her Stage Dive series...
When a stalker gets too close to plus-size model Mae Cooper, it’s time to hire some muscle.
Enter former military man turned executive protection officer Ziggy Thayer. Having spent years guarding billionaires, royalty, and rock n roll greats, he’s seen it all. From lavish parties through to every kind of excess.
There’s no reason some Instagram stylista should throw him off his game. Even if she does have the most dangerous curves he’s ever seen... 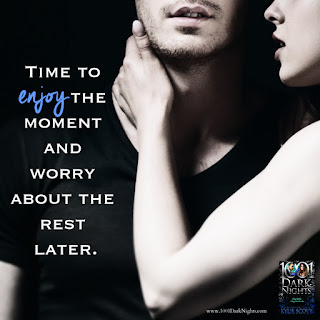 Readers are once again brought into the delicious world of the Stage Dive series with its rock stars, their significant others, as well as a few new additions who are making this series even richer.  From the first page to the last this is a novella that’s a quick read, one that kept me on the edge of my seat but wasn’t too over-the-top when it came to the drama.  Told from the viewpoint of plus-sized model Mae, readers will find themselves holding on for dear life as danger comes ever closer to her while her bodyguard Ziggy grows ever closer to her too.

Mae Cooper lives in the same building as the Stage Dive family which makes her part of their family too, especially when she needs help the most as a stalker has started sending her troubling “gifts”.  Enter Ziggy Thayer, the strong and stoic bodyguard whose actions here speak louder than words.  Though he wants to keep things professional between them, as he wants to be a success in his business, it’s not long before the connection between them becomes too combustible to ignore and as danger comes closer he ends up putting his heart and his life on the line to keep her safe.

This was an entertaining read with a very likable heroine, one who was easy to relate to.  She’s a plus-sized model with insecurities that all of us feel, a bit feisty as she says what she means, which made me like her all the more.  When it came to Ziggy though, he was much more of a mystery.  Quiet and commanding I found him a sexy hero with a sensual vibe surrounding him which made his interactions with Mae extra sizzling.  With the POV of this novella strictly coming from Mae though meant readers never get a complete picture of Ziggy.  While I liked him I never felt like I got to know him fully.  I also enjoyed reuniting with many of the members of Stage Dive as they’re a fun-loving and supportive group.  I especially enjoyed seeing Mal Ericson who’s always good for a laugh and who is still my favorite character in this series.  I’m also looking forward to the future with the presence of Adam, a protege of the band, and Ziggy’s brother Bon. They both tempted me fully and I hope they’ll both take center stage soon.  Ms. Scott continues to shine with a novella that was short in length but long on entertainment and I recommend it to those wanting a bit of afternoon delight.

My rating for this book is a B+ 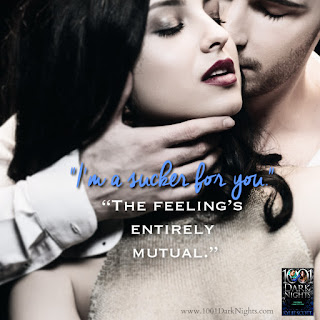 Kylie Scott is a New York Times and USA Today best-selling author. She was voted Australian Romance Writer of the year, 2013 & 2014, by the Australian Romance Writer’s Association and her books have been translated into eleven different languages. She is a long time fan of romance, rock music, and B-grade horror films. Based in Queensland, Australia with her two children and husband, she reads, writes and never dithers around on the internet.