Friends become lovers in a sweet and sensual tale of friends an their unconventional journey to HEA that brings them growing closer and finally finding a connection that has them putting their hearts on the line.  Keep reading to get a tempting taste of Scarred: Trey & Autumn by Tess Thompson, along with my impressions of this book too, then add this eighth installment in the Cliffside Bay series to your bookshelf! 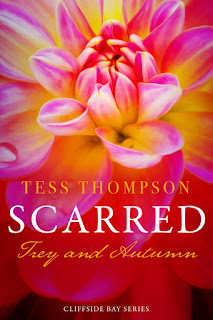 For Autumn Hickman, online dating has been an exercise in nothing more than coffee and failure. There simply isn’t a man on the planet who can compare to her best friend, Trey Wattson. And while Trey is everything Autumn has ever wanted in a partner, she knows the man who loves life’s most beautiful things could never cherish anything as scarred and mangled as her.
Trey Wattson is in love with his best friend, but he can't seem to reach her. She’s guarded, and for good reason, but Trey doesn’t care. He knows Autumn’s soul, and it’s the most beautiful thing he’s ever seen. Desperate to claim Autumn’s heart for his own, Trey conspires with The Wolves to create a fake profile on the dating site Autumn frequents. But the more Autumn trusts Trey’s online persona, the more it becomes clear that Trey is gambling with the very thing he wants most of all.
Return to Tess Thompson’s beloved Cliffside Bay and discover for yourself why true love is built on honesty and trust, and why best friends often make the very best life partners, in this anonymous online romance set in your favorite charming small town. 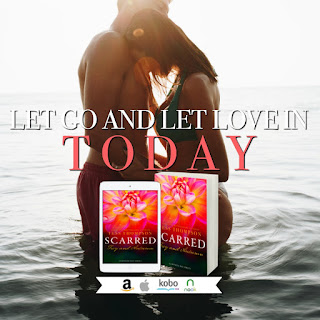 Readers will be charmed as they’re taken back to a small town full of memorable characters and friends and couples helping a formerly bitter hero and a heroine with a big heart who’s scared to have their friendship become something more.  As a divorcee the hero never thought he’d find himself drawn to someone new, never thought his heart would reawaken, but the more time he spends with his friend the more he’s starting to see a HEA in his future.  The only thing keeping their HEA in doubt is her fear over not feeling worthy of him as well as losing the close connection that already exists between them in this heartwarming tale dealing with scars on the body as well as within the heart.

Trey Wattson once thought he was on top of the world with a perfect marriage and a successful designing business until the day his wife left him for someone else and destroyed his business along the way.  She also ruined him on a personal level that hardened his heart, made him angry and bitter, and left him doubtful of love.  Heading to the quaint town of Cliffside Bay was a chance to start over, find a supportive group of friends, and introduced him to the one woman capable of reawakening his heart. Becoming a friend to Autumn warmed his heart, showed him that there are people who are unconditionally supportive, and it turned his once bitter outlook on life into something full of promise.  Being with her became comfortable, something that slowly evolved into something more, something that he wants to become permanent.  When he admits his true feelings for her though he finds himself having to engage in unexpected actions in a plan that he hopes will lead to her heart.  Trey’s come a long way in moving beyond his bitter past and his journey to claim Autumn endeared me to him every step of the way.  Having her start to look elsewhere for love is just the push he needed to move beyond friends into lovers and I was rooting for him from the very start.  By the turn of the last page I was completely won over by Trey and his big heart as he saw more to her than she herself did in their heartwarming journey to HEA.

Autumn Hickman was left with scars inside and out from a very young age thanks to an accident that left her feeling unworthy, left her with battered self-esteem, and still trying to find someone who sees beyond her scars.  Meeting Trey, and becoming friends with him, just felt right as this story progressed.  Anything more than that though has her running and desperate to keep him in the friend-zone.  After numerous awkward encounters in the real world she tries to find a connection with someone on the internet which leads to a burgeoning romance, a romance that isn’t what it seems as Trey uses unconventional means to have Autumn see him as more than just a friend.  When readers first meet Autumn they see a strong-willed and likable heroine with a kind heart. She’s immensely supportive to those she claims as hers and it makes for a close-knit group of friends who feel more like family.  Despite her strong-will though is a woman with low self-esteem, held back by scars that she tries to keep hidden from the world. There were times I was frustrated by her, frustrated by her feelings of unworthiness, but on a whole I found myself rooting for her and her loving and kind heart.  As a person with disabilities of my own I found Autumn someone I could easily relate to in a tale that saw her gaining more self-esteem with each turn of the page.

From the first page to the last I found myself charmed by this small town romance of friends becoming lovers.  I enjoyed Trey and Autumn’s evolving connection as it made him a better man and empowered her as the story progressed.  They were wonderful as friends and even better as they became something more in a romance I quickly became immersed in.  Trey and Autumn were a strong support to each other too, protective of one another in a romance that pulled at my heartstrings.  I also enjoyed reuniting with past couples in this series, getting an update on their continuing HEAs, which gave a familial vibe to all these friends as they helped Trey in his plan to win Autumn.  I was particularly drawn to single mom Sarah and I hope to see more of her in the future. Though this is the eighth installment in the Cliffside Bay series it stands strongly on its own in a heartwarming journey to HEA. 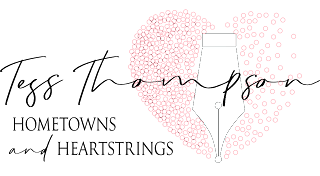 Tess Thompson is a USA Today bestselling author of small-town romance and historical fiction, with nearly 20 titles across multiple series that focus on heartwarming journeys of triumph and humanity for colorful characters you'd love to be friends with in real life.
Tess holds a degree in theater from the University of Southern California (go Trojans!), and can be found most days at her desk in suburban Seattle, where she also makes her home with the hero of her own love story and their blended family of two sons, two daughters, and five cats.
Tess loves music, dancing, books, bubble baths, cooking, wine, movies, snuggling, Seahawks football, and hearing from her readers. Drop her a line at tess@tthompsonwrites.com.