Readers will find this an immensely satisfying novella set amongst the ups and downs of the rock star life as two former loves get a second chance at HEA.  Keep reading to get a tempting taste of Abandon by Rachel Van Dyken, part of the 1001 Dark Nights Collection, then get my impressions of this next tale in the Seaside Pictures series too! 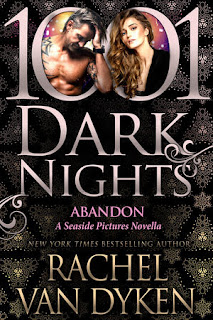 From New York Times and USA Today bestselling author Rachel Van Dyken comes a new story in her Seaside Pictures series...
It’s not every day you're slapped on stage by two different women you've been dating for the last year.
I know what you're thinking. What sort of ballsy woman gets on stage and slaps a rockstar? Does nobody have self-control anymore? It may have been the talk of the Grammy's.
Oh, yeah, forgot to mention that. I, Ty Cuban, was taken down by two psychotic women in front of the entire world. Lucky for us the audience thought it was part of the breakup song my band and I had just finished performing. I was thirty-three, hardly ready to settle down.
Except now it's getting forced on me. Seaside, Oregon. My band mates were more than happy to settle down, dig their roots into the sand, and start popping out kids. Meanwhile I was still enjoying life.
Until now. Until my forced hiatus teaching freaking guitar lessons at the local studio for the next two months. Part of my punishment, do something for the community while I think deep thoughts about all my life choices.
Sixty days of hell.
It doesn't help that the other volunteer is a past flame that literally looks at me as if I've sold my soul to the devil. She has the voice of an angel and looks to kill—I would know, because she looks ready to kill me every second of every day. I broke her heart when we were on tour together a decade ago.
I'm ready to put the past behind us. She's ready to run me over with her car then stand on top of it and strum her guitar with glee.
Sixty days. I can do anything for sixty days. Including making the sexy Von Abigail fall for me all over again. This time for good.
Damn, maybe there’s something in the water. 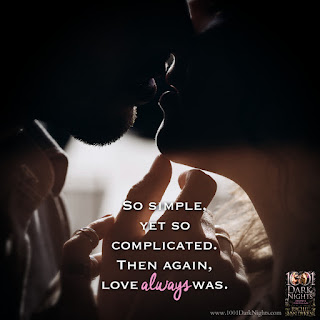 As a fan of rock star romances I’ve found myself drawn to the sexy and imperfect men of the bands AD2 and Adrenaline crafted by Ms. Van Dyken throughout the Seaside and Seaside Pictures series.  The bonds between these rock stars is very close as they’ve gone from the top of the charts, to rock bottom, before rising again thanks to the love of good women and I’ve enjoyed their rocky journey every step of the way.

Ty Cuban lost his parents at an early age, lost his naïveté, and lost that feeling of being loved unconditionally.  His growing fame instead brought him legions of fans, the attention of his aunt, and ultimately the friendship and support of Abigail...a young woman trying to make it in the music world who had issues of her own.  His feelings for Abigail were intense from the very start as they experienced many firsts together and had hoped for many more until self-doubts tore them apart.  Ten years of anger and heartbreak led to drugs and groupies, lots of moments that fed him but never satisfied.  His latest antics have his bandmates forcing him to finally deal with his past by putting him face-to-face with the one who got away which leads to hard truths and sensual encounters full of temptation.  On a whole Ty’s an immensely appealing hero, even when he was at his lowest, as there’s a lonely little boy hiding behind the bad boy facade.  Being with Abigail gave him a sense of peace and acceptance long ago as she loved him for him which made her leaving him all the more of a betrayal.  Their years apart had him giving into all his worst vices but with each of his bandmates finding HEA he’s now starting to want that for himself.  Ty’s clearly hurting at the start of this story which had me wanting to hug him.  His anger still simmers for Abigail but he can’t help himself when offering aid and comfort in their first step towards HEA that had me cheering him on every step of the way.  Throughout his journey to HEA we see a more honest side of him, a side where he gives in to his feelings as his words end up in a song.  It’s a journey that pulled at my heartstrings while putting a blush on my cheeks as their reunion teems with sexual tension that had me waiting with bated breath to take to the next level.

Abigail Von’s early years also left a mark on her psyche as the daughter of parents whose marriage was full of cheating and anger that had Abigail doubting the meaning of love.  Her mother especially pushed Abigail’s feelings of self-doubt, making her assume the worst of Ty at a time when they needed each other the most.  Walking away was hard, but seeing him self-distruct was even harder to watch as her anger over the years simmered.  Loneliness weighed on her too as no one ever made her feel as much as he did in a relationship that picked up right where it ended.  Abigail was also hurting at the start of this story, guilty for all the years that have passed and the opportunities lost. Their confrontation was a long time coming but just what they needed to get a fresh start and the feelings generated by their reveals were heartbreaking at times but cleansing too in their first step towards HEA.  Abigail’s a strong-willed heroine, still carrying around feelings of self-doubt thanks to her bitter mother, but she manages to finally push past those feelings to claim what should’ve been hers years ago.  Though she’s frustrated by Ty she still remained close with his bandmates and it made for many delightful exchanges, both playful and supportive, that made this novella even richer.

From beginning to end Ty and Abigail have a crackling connection that felt like non-stop foreplay and I enjoyed their back and forth banter that quickly took on an erotic feel.  I also enjoyed the playfulness between them that often turned their scenes sensual where each gave as good as they got.  Their close-knit past is felt deeply in this second chance romance and it warmed my heart to see them work to bring their strong bond back. Helping them along the way to HEA are his bandmates as well as this duos other famous friends.  The interactions amongst these characters made me smile and showed just how far all of them have come in becoming responsible adults.  The texts amongst the men of Adrenaline were particularly chuckle-worthy and showed how unconventional they are as a family, supportive and caring of each other.  Many have already found their HEAs, which readers get an additional glimpse of here, in scenes that endeared them all to me. The lone hold-out is Drew with his own addictive past and unrequited feelings for another man’s woman.  He too hides behind a facade, but it’s a facade that’s cracking and that has me breathlessly awaiting his own HEA.  Ms. Van Dyken has crafted yet another winner in this tale of second chances and written full of heart and soul. 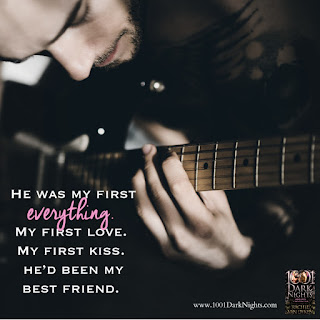 Rachel Van Dyken is a New York Times, Wall Street Journal, and USA Today bestselling author. When she’s not writing about hot hunks for her Regency romance or New Adult fiction books, Rachel is dreaming up new hunks. (The more hunks, the merrier!) While Rachel writes a lot, she also makes sure she enjoys the finer things in life—like The Bachelor and strong coffee.
Rachel lives in Idaho with her husband, son, and two boxers.