A woman finally free from the shackles of marriage, and determined to live life by her own rules, finds herself in need of the help of a childhood friend who's desperate to claim her now that she's free.  Keep reading to get a tempting taste of Her Lustful Desires by J R Salisbury, then learn even more about this book by visiting the other sites hosting this tour.  In honor of this first installment in The Merry Widows series make sure to fill out the form below for the chance to win a $25 bookstore GC too! 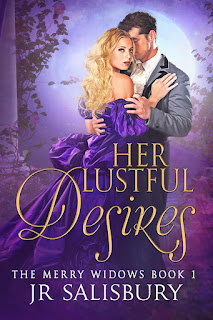 A daring widow. A determined duke. A story too wicked for the eyes of the ton...
Lady Georgiana, dowager duchess of Ashwood, emerges from a year of official mourning with her next steps firmly in mind. She will retreat to her beloved country estate, play merry matchmaker to her dearest friends, and write daring romance novels under a male pseudonym. Far from the prying eyes of the ton—and her late husband’s odious cousin.But when her publisher wants to meet “Geoff Parker” in person, she gratefully accepts the help of Jeremy Graystone, childhood friend and heir to a dukedom. A man whose bronze, muscular good looks could tempt her to forget to keep him at arm’s length.Years ago, Jeremy had to watch Georgiana’s family marry her off to another. Now the timing is finally right. But with Georgiana determined to relish her newfound freedom, he will be patient and plan for the day he will have her in his bed, his hands tangled in her spun-gold hair, her lapis blue eyes only for him.And do whatever is necessary to keep her late husband’s greedy cousin from destroying her happiness...
EXCERPT:
Martin pushed his way into the solicitor’s office, acting as though he were the most important man in all of England.
She’d never met him before, but he was everything Ashwood had described him to be. An unattractive short man who bordered on obesity, sweated profusely, and had a head of thinning dark blond hair and cutting brown eyes.
He barely acknowledged her as he sat in the chair beside hers. “What’s she doing here?” he demanded.
“She is your cousin’s widow. This concerns her as well,” Pickford replied, looking him in the eyes.
“She’s just that—a widow. All she’ll need is some source of income until she can find another man to dupe and a place to live. There must be somewhere we can put her.”
Georgiana’s back bristled. Time to put this man in his place. “I’m sorry, my lord, but I’m sitting right here. I’m not a book on a shelf you take out to dust off from time to time. I’m a living, breathing human.”
“Yes, yes. Now, can we get on with this? My bags and such should arrive at the house, along with my valet, as we speak. There’s much to do.”
“And where would you have me stay, my lord?” She knew her misuse of his new title would irritate him, and that was what she intended, wanting to see him blow up like a puffer fish, insulted. Which was precisely what happened next.
“I’m sorry, but I’m now the duke and therefore referred to as Your Grace.”
“And I am the dowager duchess and am referred to as Your Grace as well,” she replied smugly.
“Your living arrangements are none of my concern. As I said, I’ll be happy to find a cottage or small house on one of the estates. Until one is found, I suggest you go to a hotel. There is no longer a place for you at Ashwood House.”
“You’d throw a dowager duchess out onto the street?” Georgiana said in mock horror. Martin was a miserable man, and she would be sure everyone among the ton knew it. All she had to do was say the word, and invitations would be few.
Pickford interrupted their bickering. “Can we begin, Your Graces?”
“Of course,” Georgiana said with a polite smile.
Martin nodded and grunted. “Oh, very well, though I strongly protest to this woman being present.”
“Duly noted, Your Grace.”
The next hour was painful. Martin challenged every point of Ashwood’s will where Georgiana was included, but Pickford persevered and finally finished. She rose, ready to take her leave.
“Would you be so kind as to send a copy of all this to my solicitor, please?” she asked. She and Pickford had already gone over it. Because of Martin’s attitude, she had decided long before meeting the new duke to have her affairs handled by the prestigious firm of Kingsley and Kingsley.
Pickford nodded as he rose. “I will make sure a copy is forwarded to Kingsley and Kingsley. I’m sorry to lose your business, Your Grace, but I understand. I look forward to perhaps doing business with you again in the future.”
Nothing had been lost on Martin, and though he didn’t utter a word, his eyes never left her.
“I assume the carriage you use belongs to me now,” he challenged. “Have it sent back to Ashwood House as soon as you’re finished. You’ll have to purchase your own or hire one.” He snorted, thinking himself funny. Such a vulgar sound.
“No, Your Grace, I purchased the carriage and four you saw. If there’s nothing else, I bid you both good day.”
BUY AT AMAZON here.

AUTHOR INFO:
I've always been a creative individual. Writing is just a facet of that creativity...
My careers in public relations in and around the entertainment industry, photography, editing, artist management, modeling and special event planning all elevated my passion for writing, not to mention gave me a treasure trove for story lines.
I write women's fiction; contemporary romance (as Jamie Salisbury) and historical romance (as JR Salisbury) which is ever evolving. I am fortunate enough that writing (and marketing of said product(s)) is my full-time job, although I always have one or two other projects going at the same time.
Some of my other interests include photography, equestrianism, reading, and of course, travel.
I sincerely hope my writing will entertain, enlighten, and inspire others to pick up the pen and pursue their own dreams. I love to be contacted by readers, writers, and history buffs. You may contact me by email HERE.
**********GIVEAWAY**********
a Rafflecopter giveaway
at May 02, 2022