An emotionally intense tale of friends to lovers set in the rockstar world becomes a gritty and gripping series starter that readers get a special excerpt of today.  Keep reading to get a tempting taste of Black Hearts by Tori Fox, then start counting down the days until this first installment in the Saints & Sinners series hits bookshelves on September 8th! 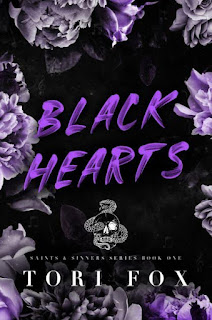 I’ve been in love with Charlie Fortier since we were seven years old and she punched me in the face for pulling on her pigtails.
She was the girl next door.I was the punk ass kid who got in trouble.She told me she loved me when she was seventeen. I broke her heart instead.Then I left. And my band became one of the biggest in the world.She was always around. On the sidelines. Being my friend.And I’ve spent the last twelve years in love with her. She just doesn’t know.But I can’t tell her. Because I can’t be with her.I made too many deals to keep her safe.I owe too many debts for those same reasons.Now I'm back home. And she is everywhere. Staying away is too hard. But the truth is harder.I have scars on my black heart and they all belong to her.
EXCERPT:
I scribble away in my notebook. A jumble of words and feelings. Anger, fear, frustration, lust. I’ve never let my feelings get like this with Charlie before. Even when we dated for two months in high school. This is on an entirely different level. And I don’t know if it’s because of the raging jealousy in me or if it’s because spending time with her, the little that I have has knocked me into a time warp, into a place where Charlie was everything to me.
She fell asleep last night on my lap, halfway through the movie. I ran my fingers through her soft lilac hair as she snored softly on my thigh. It took every ounce of willpower I had not to let my dick come to life. I did let myself lean over and kiss her forehead, remembering what it was like to touch her body. But that was twelve years ago. We were kids on the verge of adulthood. And now she is like an entirely new work of art I want to explore.
I want to press my lips across her slender neck and down her clavicle. I want to lick between those perfect perky breasts and trace the lines of the tattoo I know she has there. I want to inhale the sweet, sweet smell of her and then devour her until she is crying my name.
She’s always been my Charlie. She always will be my Charlie.
Ever since we were kids riding bikes in the street. When I taught her how to skateboard and use a BB gun. She taught me about the beauty of words. And music, we discovered that together sitting underneath the stars on those humid nights when both of our parents were drunk or fighting and we wanted to drown out the sound. Nirvana, Beastie Boys, Foo Fighters, Jawbreaker, Metallica, Primus, Soundgarden, Nine Inch Nails, Pearl Jam. All bands that flooded are headphones.
Then it all changed when her mom cheated on her dad then left him for Richard LeBlanc. Charlie was taken away from me, moved to an affluent side of Baton Rouge. Not that it stopped us from seeing each other. And eventually falling into something more than friendship.
But I fucked up any chance with her when I saved her by making a deal with her stepfather. And I would do it over and over again, if it meant she survived the shit he put her through. She has no idea what I did. How much it’s destroyed my life but I wanted her safe.
And with Elijah, she isn’t safe.
I carried her to my guest bedroom last night even though I wanted her in my bed. The only woman I’ve ever wanted in my bed.
Then I spent hours upstairs on the roof drinking, smoking, and writing. Years of words I left unsaid to her. I let my black heart crack. And left everything on pages of paper. Words crossed out and scribbled, the story of our life. 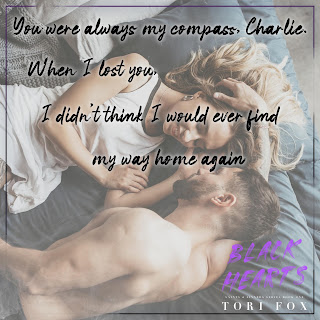 ***ABOUT THE SAINTS & SINNERS SERIES...Saints & Sinners are the biggest rock band in the world and they are back home in New Orleans. A city full of sex and sin. But they have secrets that lie deep in the underground, tied to the criminals that run the city. They promised to keep those secrets under lock and key. But the women who crack the barriers around their scarred hearts will also expose their secrets.
Saints & Sinners is a raw, gritty, and angsty Rockstar romance series with a darkness lurking throughout the pages.
In this series you'll find...friends to lovers, forbidden romance, enemies to lovers, surprise pregnancy, opposites attract, brother's best friend, forced proximity, and second chance. The reading order of this series: Black Hearts - September 8th  |  Cruel Promises - December 1st  |  Dirty Secrets - February 16, 2023  |  Wicked Lies - April 27, 2023  |  Broken Vows - June 29, 2023. Pre-Order the series HERE.*** 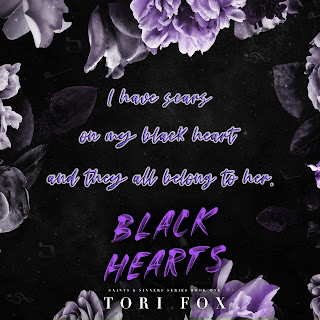 AUTHOR INFO:
Tori Fox is the author of romantic suspense and contemporary romance with a little bit of angst and a whole lot of sexy. When she isn’t writing, you can find her listening to true crime podcasts as she tends to her plants or singing along to Taylor Swift as she drinks champagne. Tori lives above the clouds with her husband and dog in the Rocky Mountains.
FACEBOOK  |  WEBSITE  |  GOODREADS AUTHOR PAGE  |  INSTAGRAM  |  TIKTOK  |  TWITTER  |  BOOKBUB  |  NEWSLETTER
at August 31, 2022