A confident and determined woman finds herself caught off guard by her attraction to a younger man in this contemporary romance.  Keep reading to get a tantalizing glimpse of Silver Lining by Aleatha Romig, then count down the days until this steamy romance hits bookshelves on October 12th. 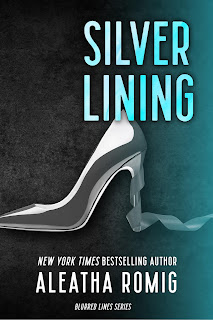 “Your task is not to seek love, but merely to seek and find all barriers within yourself that you have built against it.” ~ Rumi
Lena Montgomery’s time and energy is spent making her dreams of wealth and power a reality, no matter who she leaves in her wake. She’s taken risks, climbed the ladder, and doesn’t intend to take a step back. The last thing on her mind is blurring the lines with a man ten years her junior.
It’s not her mind that wants to break her own rule; it’s her body.
Are you ready for Lena’s story?
Hold on tight.
Have you been Aleatha’d?
From New York Times bestselling author Aleatha Romig comes a brand-new age-gap, forbidden romance, contemporary romantic-suspense novel in the world of high finance, where rules become blurred.
FIND AT GOODREADS here. 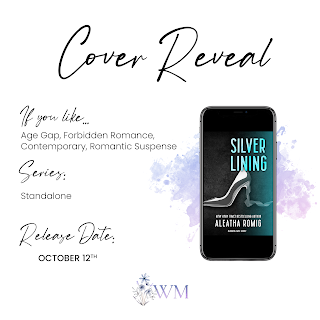 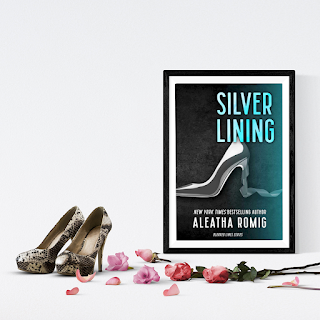 AUTHOR INFO:
Aleatha Romig is a New York Times, Wall Street Journal, and USA Today bestselling author who lives in Indiana, USA. She grew up in Mishawaka, graduated from Indiana University, and is currently living south of Indianapolis. Aleatha has raised three children with her high school sweetheart and husband of over thirty years. Before she became a full-time author, she worked days as a dental hygienist and spent her nights writing. Now, when she's not imagining mind-blowing twists and turns, she likes to spend her time with her family and friends. Her other pastimes include reading and creating heroes/anti-heroes who haunt your dreams and bring your imagination to life!
Aleatha released her first novel, CONSEQUENCES, in August of 2011. CONSEQUENCES became a bestselling series with five novels and two companions released from 2011 through 2015. The compelling and epic story of Anthony and Claire Rawlings has graced more than half a million e-readers. Aleatha released the first of her series TALES FROM THE DARK SIDE, INSIDIOUS, in the fall of 2014. These stand alone thrillers continue Aleatha's twisted style with an increase in heat.
In the fall of 2015, Aleatha moved head first into the world of dark romantic suspense with the release of BETRAYAL, the first of her five novel INFIDELITY series that has taken the reading world by storm. She also began her traditional publishing career with Thomas and Mercer. Her books INTO THE LIGHT and AWAY FROM THE DARK were published through this mystery/thriller publisher in 2016.
In the spring of 2017, Aleatha released her first stand-alone, fun, and sexy romantic comedy with PLUS ONE, followed by the sweet stand-alone, ONE NIGHT.
Aleatha is a "Published Author's Network" member of the Romance Writers of America and PEN America. She is represented by Kevan Lyon of Marsal Lyon Literary Agency.
NEWSLETTER  |  WEBSITE  |  FACEBOOK  |  AMAZON AUTHOR PAGE  |  GOODREADS AUTHOR PAGE  |  INSTAGRAM  |  TWITTER  |  PINTEREST
at August 01, 2022