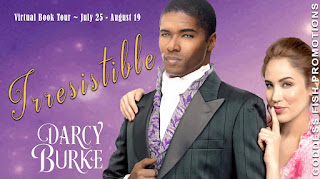 A young woman uninterested in marriage finds herself in a fake marriage so she can use her brain for a bit of adventure in service to her country.  Love is the last thing she expects though in this Regency romance of opposites attracting.  Keep reading to get a tempting taste of Irresistible by Darcy Burke, hear from the author about the difference between historical and contemporary romances, then learn even more about this book by visiting the other sites hosting this tour.  In honor of this sixth installment in The Phoenix Club series make sure to fill out the form below for the chance to win a $50 bookstore GC too!
Words of Wisdom from Ms. Burke About Writing Regency vs. Contemporary....
You may not know that I’ve also written two contemporary romance series. Set in small-town wine country Oregon, both series are set in the same town/world and are really a saga of two families. I hadn’t ever planned to write contemporary romance (historical is my first love and was all I read through my teens and twenties), but one very cold night during a writing retreat when we had no heat in our rental house, the idea for the series came to me rather fully formed.
People often ask me if it’s hard to write in two time periods. I would say yes if I was trying to write them at the same time, which I definitely do not, lol. But then, I have trouble writing two things at the same time, regardless of time period. I think some people assume contemporary is easier, that it requires less research. To this I say: not really! Contemporary romance requires just as much research, depending on what you’re writing about. I wrote about a family who owned brewpubs. So I went to a local brewpub and got a 1-1 tour on how they make beer (it’s actually the local chain on which my fictional brewpub chain is based so that was fun). Then when I had a character who wanted to stray from the family business (gasp!) and make wine, I went on a personal tour of a winery. (This included an amazing harvest lunch as it was harvest time—lucky me!) It was so great to ask questions, especially since I was able to meet with the woman who’d actually started the winery, which is what my characters would be doing. I needed to know more than just how to make wine. I will admit this sort of research was easier to complete because it’s right next door for me. It’s harder for me to tour, say, Regency England, so I rely on books and the good ol’ internet for building my historical worlds.
Whether I am writing romance set in the Regency period or in the present day, world-building is the most important part. Research and imagination are key—for me—in doing that. A great world is one I am reluctant to leave and that I look forward to visiting again and again. This includes not just the settings and surroundings, but the characters. Sometimes, I create secondary characters with backstories that are just as deep and complete as my main characters! 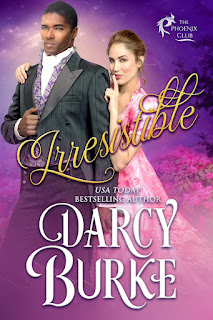 Jessamine Goodfellow has spent six Seasons avoiding the parson’s trap, and spinsterhood is finally within her grasp. A brilliant scholar, she longs for adventure and new experiences, things her family frowns upon. Presented with the opportunity to use her puzzle-solving talent on a secret mission for the Foreign Office, Jess eagerly accepts. Even when it means posing as the wife of a scorchingly attractive Scotsman who she must also covertly investigate as a possible double agent.
Lord Dougal MacNair, the new Viscount Fallin, has always completed his assignments for the Foreign Office alone. Now he’s saddled with an overly enthusiastic amateur partner. She possesses a remarkable intellect, but something about her isn’t quite right, and after two failed missions, Dougal is certain someone is working against him. Battling their secret suspicions, Dougal and Jess dive deep into their cover as a married couple, which arouses temptations they find irresistible. Danger is all around them, but it’s their hearts that may be the most imperiled.
EXCERPT:
“Have you ever given up on a cryptogram?”
“No.”
“And I imagine some of them weren’t easy.”
She exhaled. “No, they were not.”
“I assumed as much. I know you, Jess, and you’re tenacious.”
“We haven’t even known each other a fortnight,” she scoffed. “Not officially anyway.”
“What does that mean, ‘officially’?”
She took a generous drink of brandy. “We have met before. Four years ago. I remember it distinctly.”
“Four years ago?” Damn, now he felt terrible. “How can you be sure?”
She gave him a haughty look of certainty that quite frankly pricked his desire. “Because I am. You asked me to dance at the Edgemont Ball.”
He’d danced with her. Four years ago. And never again. Worse, he didn’t remember it. He was an absolute cad. “I should have remembered you. I can’t imagine why I didn’t.” he said softly.
Sentiment, which he preferred to indulge in small, manageable doses, threatened to send him to her chair, to take her hand and beg her forgiveness. A husband would do that. A lover. He was neither and since they were alone, there was no reason to continue the pretense. Only, he was fairly certain he was no longer pretending.
BUY LINKS:  AMAZON  |  BN  |  iBOOKS  |  KOBO

AUTHOR INFO:
Darcy Burke is the USA Today Bestselling Author of sexy, emotional historical and contemporary romance. Darcy wrote her first book at age 11, a happily ever after about a swan addicted to magic and the female swan who loved him, with exceedingly poor illustrations. Click here to Join her Reader Club.
A native Oregonian, Darcy lives on the edge of wine country with her guitar-strumming husband, artist daughter, and imaginative son who will almost certainly out-write her one day (that may be tomorrow).
They’re a crazy cat family with two Bengal cats, a small, fame-seeking cat named after a fruit, an older rescue Maine Coon with attitude to spare, and a collection of neighbor cats who hang out on the deck and occasionally venture inside. You can find Darcy at a winery, in her comfy writing chair, or binge-watching TV with the family.
Her happy places are Disneyland, Labor Day weekend at the Gorge, Denmark, and anywhere in the UK—so long as her family is there too.
WEBSITE  |  NEWSLETTER  |  FACEBOOK AUTHOR PAGE  |  FACEBOOK READER GROUP  |  INSTAGRAM  |  TWITTER  |  BOOKBUB  |  GOODREADS AUTHOR PAGE
**********GIVEAWAY**********
a Rafflecopter giveaway
at August 11, 2022