A determined (and sexy) soldier wages a steamy, and at times suspenseful, battle to win the heart and mind of a woman who's caught up in danger from a drug cartel.  Keep reading to get a tempting taste of Hunted by Allyson Charles, learn even more about this book by visiting the other sites hosting this tour, then add it to your bookshelf while it’s on sale for 99 cents.  In honor of this first installment in the Marine Raiders Alpha series make sure to fill out the form below for the chance to win a $20 bookstore GC too! 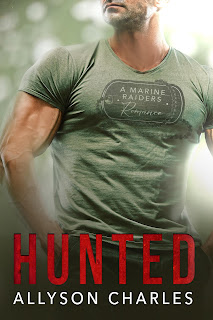 A tough special forces operator who’s never run from a fight. A woman about to give him the biggest battle of his life.
Marine Raider Jake Skinner has a nose for trouble. He never expected to find it in a beautiful woman adrift at sea. But once he has her in his arms, he knows he’s never letting her go.Caroline only had one rule when it came to dating – no military men. When the sexy Marine pulls her from the ocean, her resolution goes to war against his resolve to break through her walls – and goes against her own secret longings.As a drug cartel sets its sights on Caroline, Jake is determined to move heaven and earth to keep her safe. But if Caroline can’t learn to trust her heart, it could spell the end for them both.Meet the men of Alpha Squad. Protective, strong-willed, and tough, they go hard after what they want. And when they set their sights on a woman, they’ll use every weapon in their arsenal to make her theirs. Each book in this series is a fast, steamy read, full of pulse-pounding action. Dive into this series today!

EXCERPT:
“You’ve been ignoring me.”
Caroline yelped, spinning like a top on her front doorstep, her key scraping the flaking paint on the door.
Jake stood before her, the afternoon sun glinting off his aviator glasses. He was wearing jeans and a t-shirt, every inch of the denim and cotton molding to his muscles.
She shut her mouth with a snap and swallowed. It didn’t matter that he looked better than a chocolate cheesecake after a three-mile run. He was off-limits. Even if remembering the feel of his arms around her had been the only thing that had chased away her nightmares the past couple of days. He was military. She’d sworn she’d never go there.
“Ignoring you?” She tittered uncomfortably. “I don’t know what you’re talking about.”
He shoved his sunglasses to the top of his head. With her standing on her front stoop and him on the ground, they were about eye-level.
His gaze bore into her. “Caroline—”
The door squealed behind her, and she jumped again, her purse tumbling to the ground.
“I thought I heard you out here.” Sam stood in the doorway. “Hi Jake. Tequila?” she asked Caroline.
Pressing a hand to her heart, Caroline blew out a breath. “If we have any left it will be in the second cupboard to the right of the fridge.”
Sam nodded. “I’m making watermelon margaritas, Jake. Hope you can join us.” Then she disappeared back inside.
“Are you always this jumpy?” Jake bent and scooped up her purse. He placed a tin of mints and a lip gloss that had spilled from it back inside and handed her the bag.
BUY LINKS:  AMAZON  |  BN  |  iBOOKS  |  KOBO  |  GOOGLE PLAY

AUTHOR INFO:
Allyson Charles lives in Colorado. She’s the author of sexy and funny small-town romances, including the Pineville Romance series and The Forever series. A former attorney, she happily ditched those suits and now works in her pajamas writing about men’s briefs instead of legal briefs. When she’s not writing, she’s probably engaged in one of her favorite hobbies: napping, eating, or martial arts (That last one almost makes up for the first two, right?). One of Allyson’s greatest sources of happiness is that she now lives in a city that has a Cracker Barrel.
Allyson Charles also writes steamy historical romances under the name Alyson Chase, and paranormal romances under the name A. Caprice.
**********GIVEAWAY**********
a Rafflecopter giveaway
at August 08, 2022